Was way better than I had anticipated. I thought it was going to be more like Southern California, dry racing, but the Cyclocross Scuffle course, south of the Austin airport, was great. There wasn’t enough elevation change for my liking, but other than that, the course was nice. Nearly all grass, a little tacky from moisture, pretty fun.

I wasn’t sure how I was going to be. I still am not sure how I was. I kind of screwed myself before the start. Sometimes before a cross race when I haven’t warmed up enough, I do a few running wind sprints to get winded and pump blood into my legs. Anyway, about 15 minutes before the start, I decided to do a few of these things and pulled my right hamstring. I’m not sure that pulled is the right term, maybe tore, I don’t know. All I know is that it is really sore right now after icing it for a while last night.

Now to the race. I’m not sure how many guys started, maybe 20 something. The race started out pretty tame. This guy, Paul Bonds, has ruled the Texas cross scene this season. He is an ex rodeo bull rider and used to live in Durango with my friends, Scott Daubert, Trek’s Marketing Czar, and Elladee Brown, ex downhill MTB stud. Pretty small world.

Anyway, Paul took off from the start and that is how it went most of the race. Wiley Mosely, Specialized, was with us for the first couple laps, but got crossed up(no pun intended) in one of the three sand crossing, never to be seen again. My hamstring was feeling weird, not painful, just weird. I wasn’t going that great. Not horrible, but not great. Maybe not even good, I don’t know. I was still foggy and maybe pretty tired from driving 10 hours. Maybe that is why my hamstring is rebelling so much. Whatever the reason, I didn’t have the desire to really ride full out the whole hour. Or even a big part of it.

So, we 2 laps to go, it was getting interesting. I’d figured out where I wanted to be leading as was looking forward to the finish. I knew I didn’t want to be following anymore in the sand. There is no reason to follow someone through sand like that. When they screw up, they screw you up and when you screw up and they don’t, then you chase. Plus, the exited, mildly drunk spectators, were using a rake to move the sand around, into big piles. It made the sand pits just that more interesting.

The problem was that Paul didn’t make it through the newly redesigned sand pit with a lap and a half to go. I didn’t realize how screwed up it went for him. I did punch it pretty good, but he was having gear issues, after burying his rear derailluer in sand. The first time I looked back, I was really surprised to see how far back he was. Thus, I didn’t have to ride hard the final lap, even though it felt better riding harder than the speed I’d been going for the past 50 minutes. So, Paul held on for 2nd, Stefan Roth finished 3rd, leaving Wiley with a few laps to go. This was the first cyclo-x race I’ve done in the state of Texas, so I’m undefeated here in cross. There aren’t many states that applies to.

I hardly ever get to ride with someone during a cross race. I guess I decided to ride with someone, but it was still interesting seeing different lines and different places to accelerate. That is one of the best aspects of the sport, always being able to pick up new information and learn during each and every race.

Anyway, there is a race in a couple hours. Right now, I tentatively plan on racing. I’m limping around eating breakfast now, but I hope my hamstring will loosen up in the next 30 minutes. It is kind of disheartening, because I’ve been doing some exercises with a surgical cord to help strengthen my hamstrings. Guess they didn’t work so well. It is coldish, but I don’t think it is going to be raining like the weatherman says. If there is much/any running on the course, I’ll probably sit it out. I don’t want to really take any risks when January is only 3 weeks away.

Tonight, Ann is having a Christmas party. A professional singer, David Garza, is going to be playing her baby grand and singing. If the liquor store delivery is any indication, it should be really fun. Trudi is flying in at 6 for the 6:30 party. Busy day. 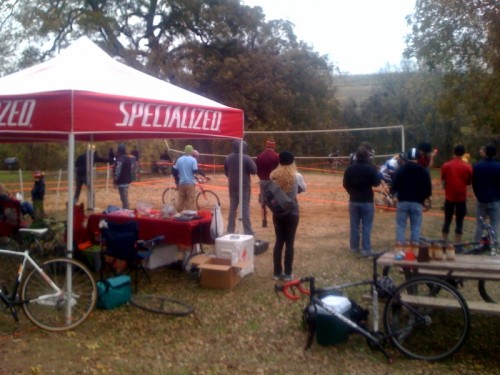 Not a great photo of one of the sand pits. 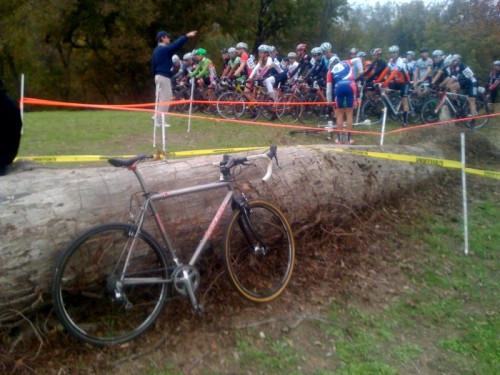 Texas version of a dismount. 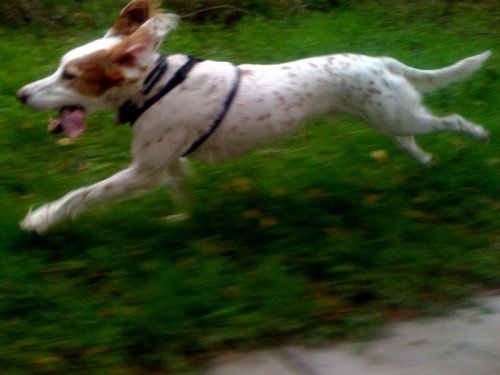 I took Bromont out for a long run after the race. He loves the cooler weather. 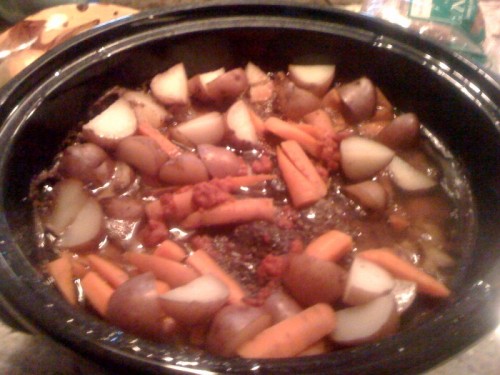 Ann made a roast for protein recovery. I don't normally eat much meat, but this was great.

5 thoughts on “Cross Racing in Texas –”