I was riding out West in Flint Hills on Sunday and there is a long metal bridge that crosses the Kansas River. There aren’t that many bridges crossing the river between Manhattan and Lawrence. Really just a couple West and then one East in Lecompton. That isn’t counting the 4 in Topeka. Anyway, we were talking about the bridge, and my friend Jack says something about trying to ride across the bridge when it was wet. I was horrified. I thought it was common knowledge, especially for all cyclists, that metal bridges are pretty much to be completely avoided with the smallest amount of water involved.

I told him a story about racing the PAC (a race around the Performing Arts Center) criterium, during SuperWeek in Milwaukee, one time, a while back. I was in a 6 or 7 guy break. We were about 3/4 of a lap ahead and were going to lap the field for sure. The problem was that there were two short metal bridges each lap. So, all of a sudden I start feeling a little drizzle on my face. I instantly said I’m done, that I’m not riding across a bridge. These guys thought I was nuts. I pulled my brakes and got on the sidewalk. To my amazement, they made it close to two laps before they all fell. Plus the field crashed too. There is a 0% chance I could have ridden over those bridges 30 times or so.

The Dupont Stage Race on the East coast one year had the same problem. There was a break, a metal bridge, rain and then no more forward movement by the break because they all fell. I couldn’t believe that the race marshals would let the riders attempt to ride over a wet metal bridge. It defied all common sense.

I spent most of the night last night screwing with my cross bikes. Everything needed to be rebuilt. And it is barely working still. It it amazing how much damage you can do to every bearing on a bicycle, wallowing in mud for 3 days in a row. Plus, the cables. I just cut them all off and started over, which is normal. What always surprises me, changing cables, is how much housing and how many cable ends it takes. I always stretch the cables pretty seriously after I put them on. It is so weird how much the cables stretch. I don’t know where I learned that, but I know a ton of guys that don’t stretch their cables at all. I have no idea how their bikes even shift the first couple days. A team mate, a couple years ago, Nick, changed his cables before a road race in Iowa. I tried to adjust his derailleur on the go, from my bike, half way through the race, with not much luck. Afterward, we messed with it and the cable needed to be tightened a half an inch at least. Common sense again.

The geese are flying over Kansas right now. Today, it was only in the mid 20’s and we rode MTB on the trails down by the river. The geese were on a flight plan to land on the river. It was great. Then walking Bromont tonight, around midnight, there was the constant sound of the geese migrating. The wind was from the north all day and tonight, about 30 mph, so it was probably a big mileage day for them. I love listening to geese migrate at night. Ever since I spent most every night for 2 months roofing that building a couple years ago, I have a special relationship with geese. They were my only company most nights and I really appreciated the companionship. I’m going to have fond memories, probably the rest of my life, which is nice. 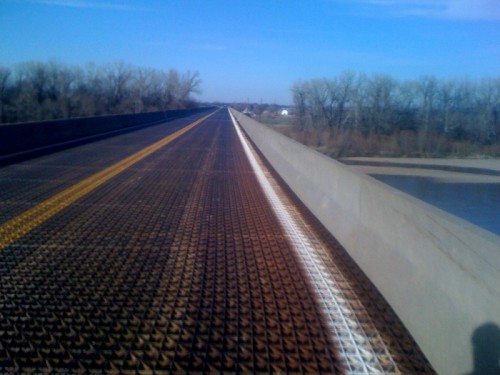 The metal bridge by Willard Kansas. 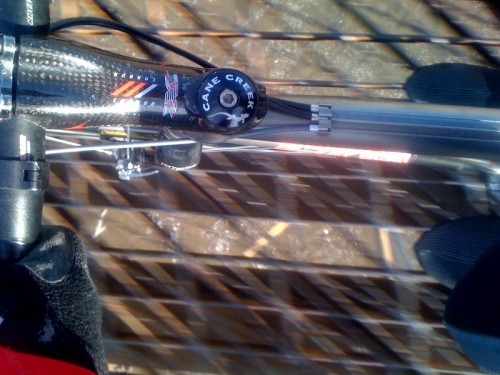 A picture shot down through the bridge looking at the river. 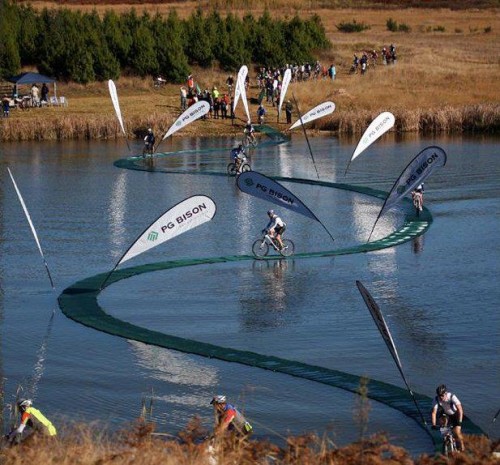 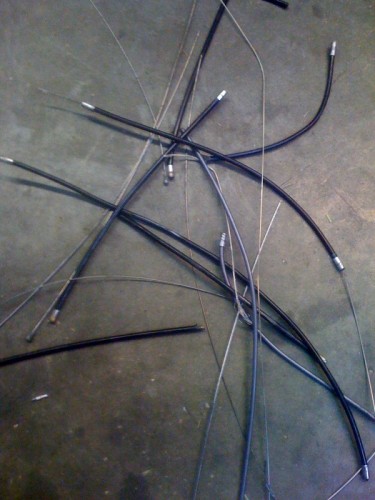 A pile of cables after changing them. 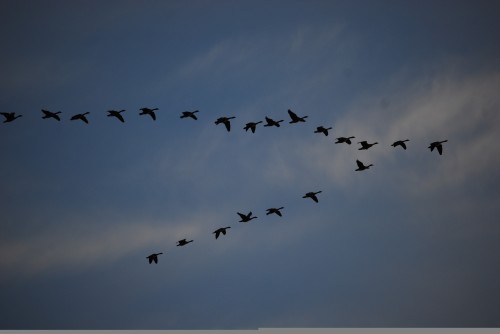 Here is a video from the race in South Africa that has the bridge in it.