I’ve always liked Floyd. I think he is a pretty genuine guy. Upbeat, fun. I almost missed the start of the race the night before the Pro Criterium Championships one year because I ran into Floyd in the coffeeshop before the race and we lost track of time talking about the Tour and him switching to Phonak. I obviously don’t approve of lots of shit the guy has done, but that doesn’t mean I wouldn’t enjoy having a beer with him and catching up.

I was up in Idyllwild, CA a few week ago and should have made an effort to track him down. I’m sure if I could have, it would have been a most interesting time. Next time I’m up there I’m going to make it a point of trying to catch up with him. Idyllwild isn’t that big of a town, so it couldn’t be that hard.

Anyway, I saw this article last night about how WADA’s current director general said that the allegations that were made by Floyd, that the UCI and the Swiss Lab that tested Lance were corrupt and were bribed, could be true. It is pretty unbelievable the guy would say that. He must have some information that isn’t public.

I haven’t been following the Floyd thing that closely. Maybe nothing new has happened, so I’m up to date. But this is new news. Important news. The UCI, etc. is so fucked up. I can understand weird stuff happening under the radar. Times change and thus, the environment surrounding things that were once overlooked and now aren’t accepted, is much different. But when you get caught with your hand in the cookie jar, don’t lie. You don’t necessarily have to blab your guts out, but you look so stupid and so much more dishonest/corrupt if you lie.

I’d like to know where that lawsuit that the UCI is filing against Floyd is right now. Supposedly it was filed months ago, but the last I heard, Floyd couldn’t find any lawsuit filed against him. Another good rule, don’t make a threat when you have no intention of following up on the threat. If you make a threat, be sure you have the goods to enforce it.

Floyd is now going to try to get into driving race cars. He might have a talent in that, he was incredible good handling his bike on and off-road. I’m not sure what it is about guys that win the Tour wanting to drive race cars? I don’t have much desire to do that, but I never even raced the Tour. I wouldn’t mind riding a really fast motorcycle though. From the video, Floyd looks like he is in training to be a Nascar driver!

Below is a long interview with Floyd. It is pretty interesting. I saw it a while ago. He doesn’t sound like he is making shit up. It all sounds pretty true, but I think time will have to sort most of that out. If you have a little time, maybe just watch it for a bit.

Anyway, it is going to be interesting how the UCI responds to this statement by the David Howman,the director general of WADA. Maybe it going to upset them and then they are going to have to do something really rash, like threaten him with a lawsuit. Scary, scary. 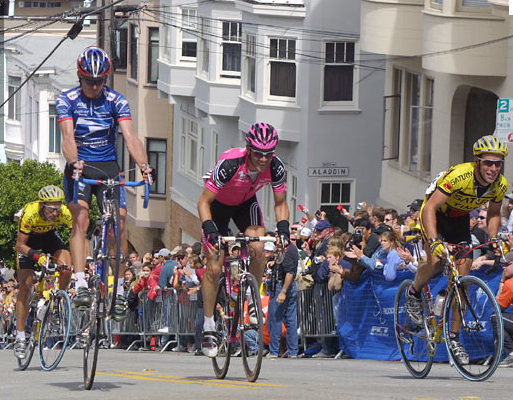 Floyd being Floyd in San Fransico. Tim Johnson is the guy in the Saturn jersey to Floyd's left.