I don’t really know what to think about the race last night. I was pretty much the same as last weekend in Oklahoma. I wasn’t going good, but hardly ever felt at my limit.

The race wasn’t that much pedaling. I know most the other guys in the race would probably disagree with that, but in reality, there were only two riding sections. One on the pavement going to the start finish line and one more riding towards the only muddy section of the course, a little dip you have to navigate twice in a row. Other than that, the selection of the race was the hill. The hill was muddy enough that nearly no one could ride it. I heard that Barry Wicks rode it most every lap. I saw Byran Fawley ride in just once, maybe Troy Wells too once or twice. I talked to Todd (Wells) after the race and he said he tried it every lap and never made it. I never attempted it once. But running it wasn’t easy either. It was probably 30 meters long and pretty steep, a little muddy, just enough to completely waste you. The one time I felt over my head was on the 2nd or 3rd lap when I got to the top of the hill and thought that there was no chance that I was going to be able to pedal after I did the descent.

I got a super good call-up. I think maybe 13th, but definitely in the top 15. I was on the 2nd row. This is the first time that the “random” call-up has worked for me. I got an okay start. I didn’t feel like I needed to push it because I didn’t need to finish in the top ten, like it would be easy. So, I was somewhere between 10th and 15, but everyone was in line connected. The first time we went through the muddy ditch, Chris Jones screwed up big time and hit a rut that shot him off course into the ribbon. That was the start of a huge log jam. I dismounted and ran, but didn’t move up. Then on the fly over, I passed a couple more guys and then on the hill a couple more. 1/2 a lap in I was in 10th and was thinking that was pretty good, but I needed to loose a place before the finish.

I was leading a group that was going for 10th-15, with the front group about 200 meters ahead of us. I would have been fine in the front group, but the gap was there. I didn’t have any ability to bridge the gap up to them and really didn’t have any reason to do it. Then it got kind of interesting for me, because my ex-team mate, Joseph Schmaltz, KCCX, was in my group and he needs/wants to get a UCI point for call ups. The 3rd or 4th time up the hill, someone screwed up at the bottom and Joseph got separation. I ran up the hill and got to the front to soft pedal and let Joseph ride away. That didn’t last even half a lap before my group was sick of my slow pace. I thought Joseph had a large enough gap to stay away. But, Bryan Fawley did one of his super efforts and caught Joseph and then out sprinted him right at the line. That was pretty disappointing. I think Bryan knew that Joseph had no UCI points and 1 more point isn’t going to do Bryan much good. There are two more races, with the top 15 getting points on Sunday, so hopefully Joseph can get some points/a point the next two days.

Jamie Driscoll and Tim Johnson were pretty far ahead, but Driscoll dropped Johnson and Chris Jones came back from the dead and caught Tim and then passed him for 2nd. Todd Wells finished 4th. I think Brian Matter was 5th. I was 13th and didn’t have to ride very hard the last couple laps to get that place. I must of been close to 5 minutes back, but haven’t seen the results. I am still pretty waxed. My main problem this morning is that I woke up after sleeping about 3 hours and my left knee was super painful. I had hope it would loosen up walking, but that doesn’t seem to be the case yet. I’m going to go on the internet and see what the problem is. It is the outside, in the little crack, where the knee pivots. Plus, my tooth is crazy painful. I’m eating antibiotics like candy though, so I hope that will turn around very soon. Brian Matter has a bad tooth problem too. His is so bad that you can actually see a lump in his cheek. I told him he doesn’t want to be messing around with that and needs to take care of it ASAP. He says it doesn’t hurt, but I don’t think that matters so much. 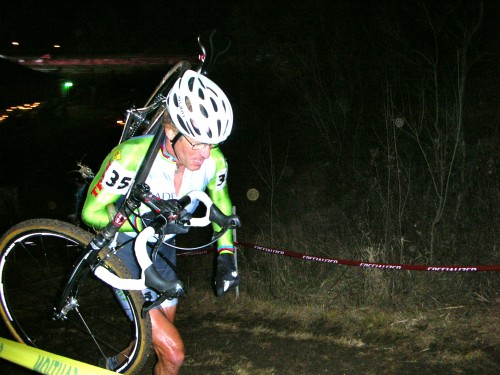 On the run up. I've been experimenting wearing glasses at night racing. The jury is still out on whether it is better or not. 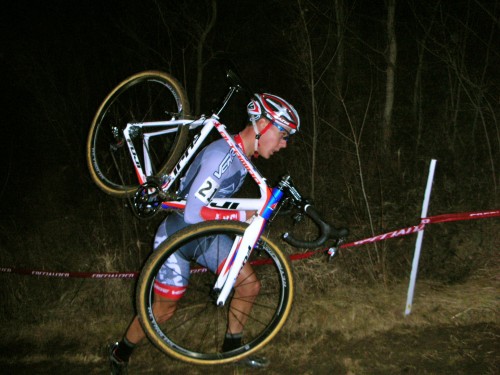 Joseph on the same hill. 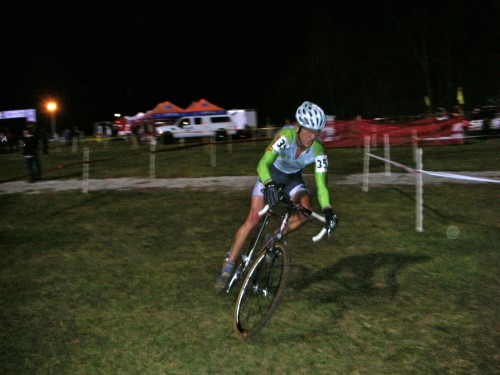 There were tons of smooth grassy corners that were just a little slick. Not like it is going to be today. 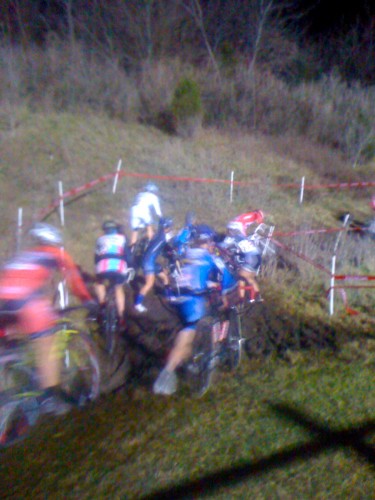 The women log jammed on the same dip that Chris Jones screwed up on. 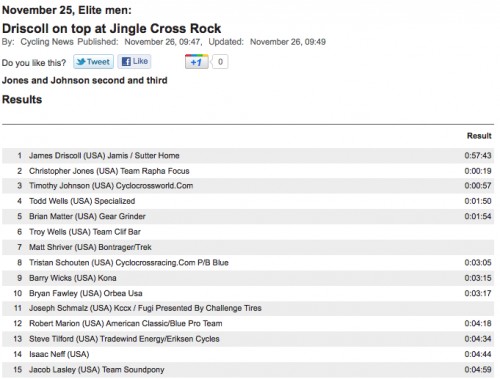