I haven’t really been paying attention to how much bikes and parts cost. I don’t go to the manufactures website and see what the price for their top end road or MTB bikes sell for. Last year, I remembering going into a Trek Concept Store in San Diego and ended taking photos of the price tags because it amazed me, but I didn’t really spend enough time in there to understand how stupid expensive that nearly everything is now.

Trudi just got a email from BMC, seeing if she wants to get a bike. It listed the retail costs of the BMC line. There is a TT bike that costs nearly $12000. So, I went to the Specialized website and saw that is about the same price for their new Shiv TT Di2 bike. $11000 for the high end Tarmac. The Epic MTB is a more reasonable $10500 with Sram or XTR parts.

These numbers are insane. I can’t really understand it. Then I started looking at individual parts. And it’s even more stupid. Hydraulic brakes can cost nearly $400 a wheel. Seats that top $200. And that isn’t an expensive one. Carbon railed seats over $300. What happened to the $30 seat. I’ve have to work 3 jobs if I had to buy a new seat everytime I ruined one. They break by nearly just looking at them now. I used to ride the same saddle season after season.

I might not ever advise anyone to ever to go out and purchase a new MTB bike. If I hit the wrong race with that new bike, I could take it’s $10000 retail value bike down to less the $2000 in just a couple hours. I did that once in Brazil.

I was riding for Specialized and took a brand new race bike to a Cactus Cup in Sao Paulo one February. It rained the whole day before and the course was solid clay. It was a 3 mile loop and took close to 45 minutes for each of 3 laps. There wasn’t a part on that bike, well, maybe the tires, that didn’t need to be replaced. I carried the bike so much on my shoulder, cyclo-x style, that all the paint on the left side of my bike was gone and it was down to bare aluminum.

I thought that the price of carbon wheels was getting kind of out of control. But if you look around, you can get a pretty light set of good wheels for less than $1000. That seems like a deal compared to hydraulic brakes. The same with the electronic Di2 shifting. I thought it was insanely priced. Now it doesn’t seem so nuts, considering how well it works.

I’m not sure where I’m going with this. I guess I want to stress that in most circumstances, bike racing doesn’t come down to what equipment you have. For sure, your equipment has to work properly, but don’t get caught up in riding an UCI weight limit bike of 6.8 kg (a little under 15 lbs.) I’ve never had a road bike close to that weight. Todd Wells‘ cross bike nearly weighs less than my road bike and my road bike is pretty stupid light.

For road racing, I’d sink my extra $$$’s in wheels and tires. For MTB and cross, tires are the most the most important piece of equipment on your bike. Other than that, get by with what you can. If you have the means to be riding a $12000 bike, go for it. There is nothing like it. But, if you don’t have the means, don’t let it stress you out too badly. It’s mostly the engine that gets you to the finish line first. 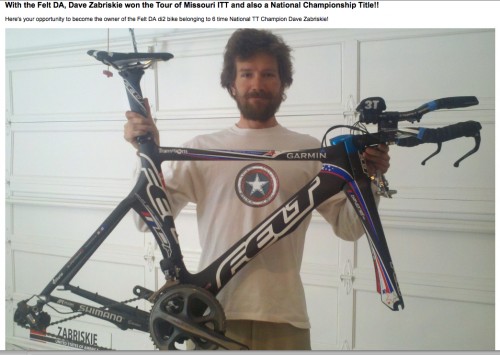 Here on eBay, you can get Dave Zabriskie’s old TT bike for a modest $5500. Of course, you’re going to have to drop another $3000 on fast wheels.