Yesterday, for me, seemed officially like the start of fall here in Kansas. It was never above 55 degrees and pretty damp all day. It is strange racing cyclo-x at 80 degrees just 2 days ago and now it is 30 degrees cooler. But the weather wasn’t what got me noticing the fall so much, it was the squirrels running around like crazy, doing their fall busy work, that started it.

This year seems like a banner year for squirrels here. There are millions of them everywhere. I like squirrels. I don’t really think of them as rodents, but I think they officially are. It not like there are lots of different types of wild animals that live in my yard that seem to cohabitant with me, but I like them just for their personalities. Well, for some of their personality traits.

Squirrels are super entertaining. For me and for all my pets. Bromont is officially a bird dog, but he wants to get a squirrel something serious. And the cats stalk squirrels nearly as intensely as birds too. I’ve never seen anyone of my pets catch a squirrel. There are way too many trees nearby for them to escape. But, that doesn’t seem to bother them the least. It’s the chase, not the capture, that is the intrigue.

I just like watching squirrels do their squirrel thing. There aren’t too many wild animals that seem to like to play as much as a squirrel does. There seems to be plenty of food around here for them, so most of the time when I see them during the year, they seem to be chasing each other and playing squirrel games. And it’s not only two, sometimes 3 or 4 play the chase thing. It is great.

Anyway, I don’t know if this has anything to do with the number of squirrels around this fall, but this was also a banner year for walnuts, black walnuts. Even though there wasn’t much rainfall this summer, there are an incredible amount of walnuts on the ground this year. They are everywhere. And they are hazardous for a bike. I don’t collect walnuts in the fall, I don’t why not. I guess because it seems like a lot of work for not much return. I did it one year, but had them on the porch, drying in the sun, and the squirrels eventually stole all of them. I didn’t mind.

But, like I said above, they can be treacherous while riding. They are on the bike paths, gravel roads and the worse is when they are just in the grass, under leaves. I’m pretty much only riding a cross bike now. I think that is because I’m too lazy to take the tubeless cross tires off my road wheels, but maybe it is because I’m enjoying riding gravel more this fall. I don’t know. But, I’ve come close to loosing control a couple times the last couple weeks by hitting a walnut or two when I’m not expecting it.

And where there are walnuts, nearly for sure, there are squirrels. And one thing that is not good about squirrels is their unpredictability when it comes to fleeing under stress. They never seem to be able to make up their minds on which direction is best to flee. That is pretty unnerving when you’re trying to avoid them on a bike. I’ve come pretty close quite a few times the last few days of plowing over a squirrel. Yesterday I ran over one’s tail. I thought it was all good, but he decided to do a U-turn about 1 foot from my front wheel. I was lucky I didn’t just squish him completely. That would have been depressing.

Anyway, I’ve been pretty fortunate to not have any real altercations with either a squirrel or walnut yet this year. But, you never know, the fall is young and I have a bunch of more encounters ahead I assume. 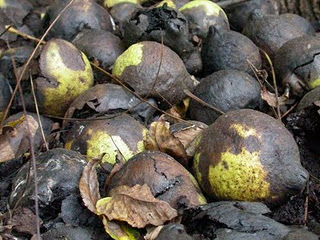 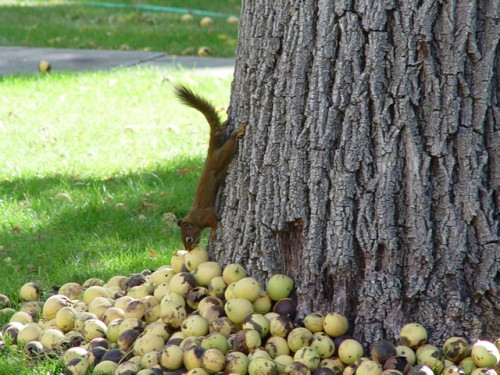 This guy got pretty lucky having its' human pile up the walnuts at the base of his tree.

6 thoughts on “Which is Worse – Squirrels or Walnuts?”