Yesterday was the 2nd day of a two day cross outside Lawrence. It was a super power course. Ryan Trebon would have loved it. Before the race, I wasn’t that excited about the new route. It was way too much riding and wind for my liking.

Joseph Schmalz called me about an hour before the race and said he was out training and wanted to know if he should come by and race. I said, “Sure.” He has been training at altitude before the USGP in Fort Collins and is heading down to Guatemala with the US U23 National Team at the end of the week for a 10 day stage race. He wanted to do some intensity, with no pressure, and has pretty low (good) cyclocross ranking points, so he was volunteering to throw his points into the USAC random number generator and hopefully lower all our points.

Joseph has had a pretty great season this year with some big wins in Texas, Lawrence, and Iron Hill Criterium. Cross has been an emphasis for him historically, but with Nationals being a month later, he’s doing it right and staying fit late into the season.

The race was fun. Brian was more motivated and pulled pretty much the first two laps. The 2nd time over the barriers, I didn’t dismount and put in a dig up the climb back to the finish. Joseph and I got a little gap, Andrew caught back on, but Brian got gapped a little. Joseph pulled super hard the next 3/4 lap and eventually Andrew lost my wheel. About a 1/2 lap later Joseph pulled over and left me on my own. I wasn’t that thrilled to be riding the next 45 minutes with a 30 mph North wind. But, it worked out fine.

I was having a much better day than the day before. It was just an energy management issue. There weren’t many places on this course to rest, no big descents, not too many corners in sequence where you can get in a break. But, I was gaining time every split, so that kind of gave me peace of mind and allowed me to concentrate on going faster by setting up for corners and doing all the technical skills better. It is funny how if you can stay within yourself, your speed actually increases.

Joseph went back to 3rd and was riding with Brian, chasing up to Andrew, when he fell. I think Brian plowed into him, but I’m not positive about that. Anyway, there were lots of loose, off camber corners that were tricky and one got the better of him. He got up moving, but jacked up his right calf pretty good and eventually pulled out. So much for his ranking points.

Andrew Coe finished 2nd again. He was going pretty well. Brian was right behind Andrew in 3rd. Adam Mills and Bill were racing together all day, but Bill pinched his front tire with 1/2 lap to go and rode to the finish on a flat. It would have been fun watching that play out.

I’m kind of up in the air about my schedule for the rest of the month. I need to get a new fork for my 29’r if I’m going to go over and ride Berryman MTB this weekend. I’m not sure a 4-5 hour MTB race is all that good for cross, but screw it, I like doing it.

This lack of sleeping after these cross races is kind of bothersome. I have no clue what that is all about. It is especially bothersome with NPR doing fund raising the last few days. I wish I was rich and I’d just send them a boatload of $$$ to have them just get back to their regular programing. 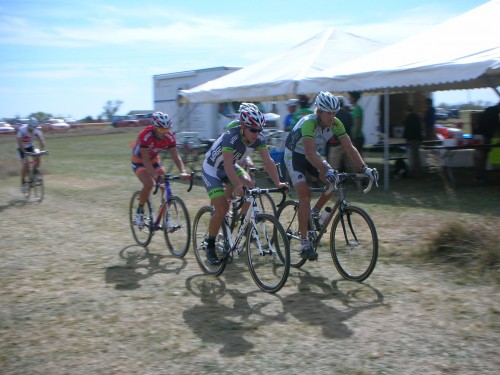 They even mowed a warmup loop in the field at the top of the course. Here I'm riding next to Joseph. 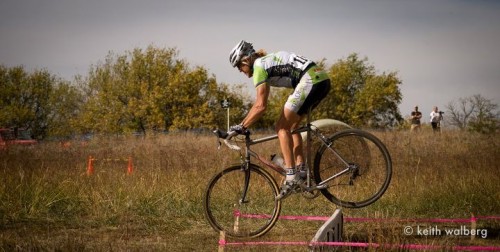 Keith Walberg took this photo. Notice I don't even have to have both feet clipped in to clear the barrier. 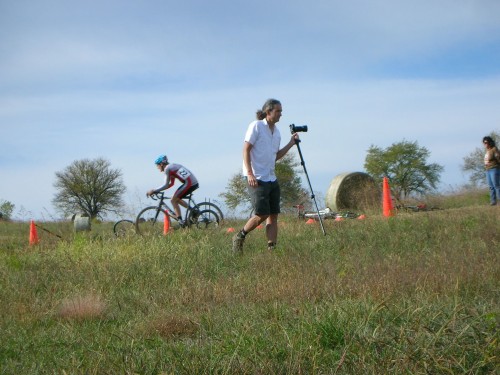 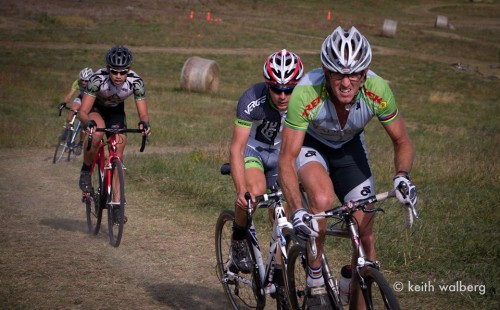 Climbing back up to the finish on the 2nd lap. Me, Joseph, Andrew and then Brian.