Yesterday I raced locally outside Lawrence Kansas. (I didn’t do the double and head up to Des Moines for stage 2 at 10pm.) The race is called the Joules Cross and it is put on be Michelle Jensen, Brian’s wife and her Freestate Women’s Team. The course is a little bit out of town on a private piece of property that is pretty much dedicated for being a year round cross course. It has a little relief and it pretty much a power course. Not much technical turning. It is mildly bumpy, so you have to bring you big boy pants and suck it up.

The race was sort of weird for me. I felt okay, but never got going. I screwed up hopping the first tall barriers and got kind of twisted in a strange way. I rode pretty hard for a couple laps and then screwed the a triple set of small barriers and jammed my seat into my left hamstring. I thought it was all over. I had a 20 second lead by then, but when I started going hard again my leg was about ready to cramp.

I sat up and rode easy for a half a lap until Andrew Coe made his way up to me. We still had 5 laps to go and I didn’t even know if I was going to finish then. I don’t think it had anything to do with the temperature, which was hot, by fall standards, lower 80’s. I think it was trauma that caused the problem.

Andrew didn’t really have a clue what to do. I was going to ride as easy as I could the rest of the day. As slowly as possible. Andrew put in a couple digs to try to distance himself from me, but I wasn’t close to redline, so that wasn’t going to work. For some reason, I wasn’t having the best bunny hopping day. Bad would be the description. I tried to run the barriers once, but that really pulled on my hamstring.

Anyway, Brian was in 3rd, about a minute back, but was slowly creeping back up to us. Andrew was in kind of a predicament. He didn’t know whether to ride hard at the front or ride slower and let Brian come back. It didn’t matter really.

The last half of the course had the most technical cornering parts and I was better there. On the last lap, I passed Andrew before the tall barriers and sort of got crossed up in front of him while he was running. I had no intention of getting in his way, but I did. I asked him if he was cool and he said yes, but that is exactly where I was always going to jump him. He knew it too. I got 5 seconds on him pretty quickly and that was about it. There was no way to make up the ground on the rest of the course. He rode in casually for 2nd. Brian 3rd, Adam Mills, KCCX 4th and Bill 5th.

Sydney Brown beat Catherine in the women’s race. Sid is very powerful, while Catherine is more of a spurty, technical rider. The course suited Sid way more than Catherine. But, it wasn’t a smear, so that is good.

It was a really nice day to be out in the country riding bikes. Lots of music, food and friends. We made our way over to Lawrence after the race to eat downtown. The KU football game wasn’t starting until 8pm, so there were crazy lines at most our favorite restaurants. We ended up eating a a burger pub, which was fine with me. I had a burger salad. I don’t know if that is better for you than a just plain burger. I guess I was missing the bun and fries, which is probably the worst stuff on a burger plate for you.

We ended up hanging afterwards at Freestate Brewery with a bunch of the Nebraska girls. That group has a lot of energy. I had to make my escape (after a couple beers and one tequila shot) because it was starting to get ugly. The is no way I could hang with them last night.

We’re driving back over for day two. I’m going for a ride this morning to see how my hamstring is doing. It is pretty sore to the touch right now, but that is to be expected. It is pretty windy today and the course is more wide open. Pretty hard cyclo-x racing conditions. 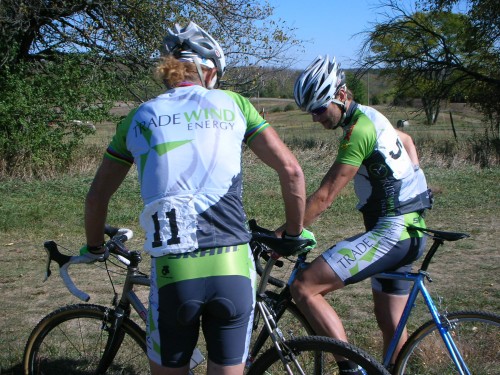 Brian and I talking before the start. I have been number 11 three races in a row. Very good luck. 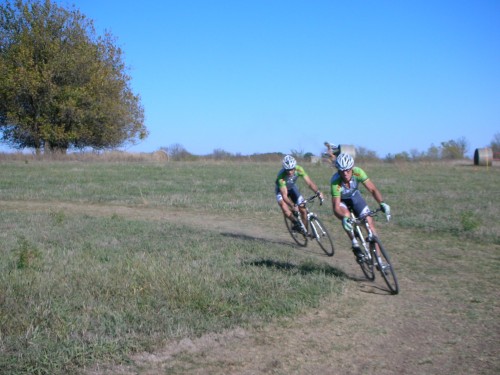 Bill and I riding together the first lap. 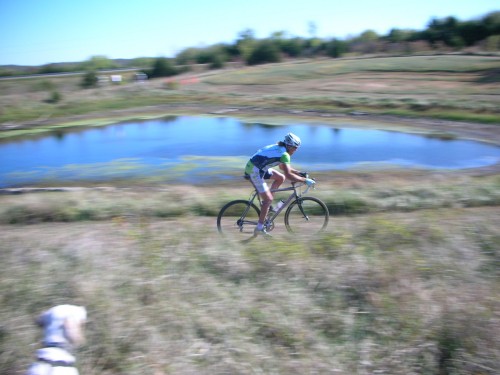 RIding on my own with Bromont watching. 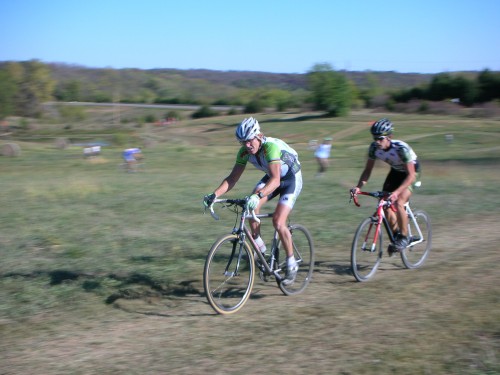 One of the few times I was actually in front of Andrew. It was exactly the opposite of this for the best of 5 laps. 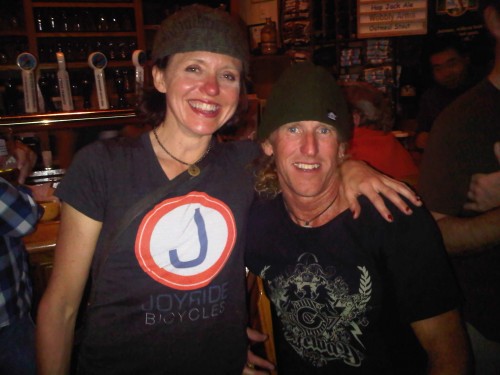 Sydney and me at FreeState.