A couple days ago, my post was ranting a bit about the bad rule of lining up the participates at Master’s World Cylco-X Championships in January 2012 by random selection. I think it was because of the realization that I could spend months preparing for something that I have no control over. That doesn’t sit that well with me, especially after last years fiasco in Belgium. So I went off a bit. But, I’m not alone here. There are lots of guys that are going to be training super hard all fall and early winter that are going to be, as of now, subject to this bad rule.

I haven’t had any contact with anyone that made the procedure in the first place, but I have to assume that everyone involved was somewhat knowledgeable about the sport of cyclocross. So, I took that to mean that the people in power just had no interest in the whole endeavor to start with. And I have to take it as a slap in the face of all Masters riders that the people that are suppose to be looking out for our interests, don’t.

That being said, I think that there is still time for the starting “procedure” to be changed. I don’t see what this random method is written in stone, when the race is still 3 months away. I see no harm in changing the rules to make the race more fair to all participates. This is the designated World Championships of the sport. I see no reason to try to introduce an element of luck into the final standing. That just doesn’t make any sense at all.

I have been sent lots ideas about revamping the rules. It baffles me that the UCI can’t come up with a ranking system for all riders, but that isn’t something that is not even part of the solution at this point. They say that they don’t even have a method to identify current National Champions from each country. If that is beyond them, then a world wide ranking system is years away.

So, here’s the way I see it. We have two choices. One is how they used to line up countries at cyclo-x worlds. Each country, that has a minimum number of participates, picks a start number. Then each country gets to chose a rider to line up in that position. Every country goes through one rotation, then it starts all over again. The problem with this idea is that many countries might not have even 3 riders in any given age category. And who from the foreign countries are going to be the ones to decide the start order for their countries riders? These problems probably make this choice a non choice.

The other is, just ride a time trial. Everyone in each and every race rides a time trial. We did it last year at the Nationals in Bend and it worked out fine.

The only argument I can think of against this is of a time restraint on the course. They have stated that each and every rider that registers is going to get a full length race. Forget that. Take all the time that has been allocated for two races and ride time trials instead. Each and every rider should ride a time trial and they should be seeded by their results. Every rider then gets to ride the championship race. I honestly don’t think the fields are going to be as large as they are in Madison the weekend before. I think many riders come to the National Championships to compete, plus to watch the other classes race. I think the fields are going to be significantly smaller in Louisville than at the Nationals. And I think the National’s fields this year are going to be be smaller than the previous years because it is a month later and because it is being held in Madison. Sorry, but that is just reality.

Anyway, that’s all I have now. Nearly all the riders competing are going to be from the United States. And there is no qualifying procedure. You show and you can ride. It will be a huge diversity of abilities. This random method is just wrong.

We are hosting this event for the next two years. We should do our best to set good precedent and to make the races the best that we can. And a super important part of this is starting the riders in the correct manner. Let’s get it right. 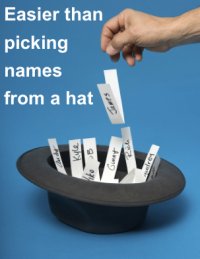 It might not be easier, but it is a hell of a lot better. 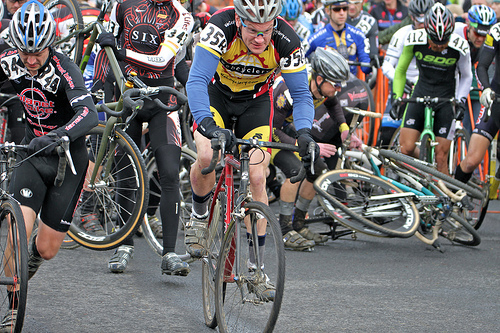 This is an example of what every race might look like with riders of diverse abilities spread all over the starting grid.