Life gets in the way of life. I thought yesterday was a free day since I’d driven until 3 am to “save” it. But when I got back here, real life took over and the day disappeared. Worse than that, it subtracted future days.

It all started trying to clean up my van, bikes and clothing from the mess on Sunday in Madison. Car washing is mandatory in these situation. For bikes, shoes, skinsuit, etc.

I then went down to the building and found that a piece of plastic covered OSB had blown off one of the destroyed skylights and ripped a hole in the rubber roof. That didn’t bug me too much because I’m an expert on rubber roofing now. I’m actually probably closer to a Cat. 3-4 in rubber roofing, but like all Cat. 3-4’s, I think I’m way more knowledgeable than I might be. So that was pretty much all afternoon.

Then last night, one of our cats, Fritz, got hit by a car. A neighbor came to our door and said he had hit a cat. Fritz was under the car, but not under the wheel. It kind of bothered me that the guy was calling me Steve and I had no idea who he was. But it was dark and I was more worried about the cat. Anyway, I dragged Fritz out from underneath the car and he was limp and breathing crazy hard and fast. So, Trudi called our Vet, Bryan Stancliffe, D.V.M., and he drove over from Lawrence and met us as the clinic. It was actually kind of interesting being in a vet clinic after hours. There are tons of animals there. And all want attention.

Anyway, he said Fritz was in shock, his front leg is not right and there was a chance of internal bleeding. He said if he lived over night, then he’d be okay. I decided that we should bring Fritz home because I didn’t want the cat to be alone and maybe die by itself in a cage. So, now the cat is under a dresser in our room. It moved around a little last night, so it probably will be alright. It can’t really walk, but cats make due pretty well. I’m gonna take him back this morning and have him checked out more fully.

The Jane Goodall live event is at a theater in Topeka tonight, so this day is pretty much done. Sometimes it is way easier being on the road, racing, than participating in everyday life. 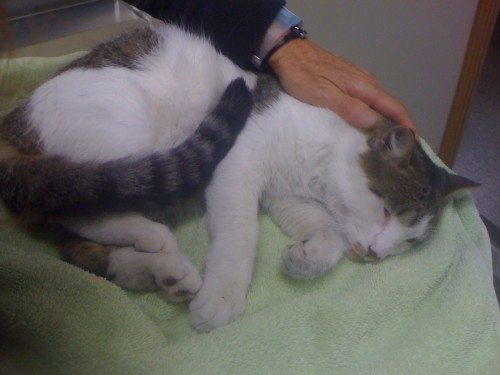 Fritz at the vet. 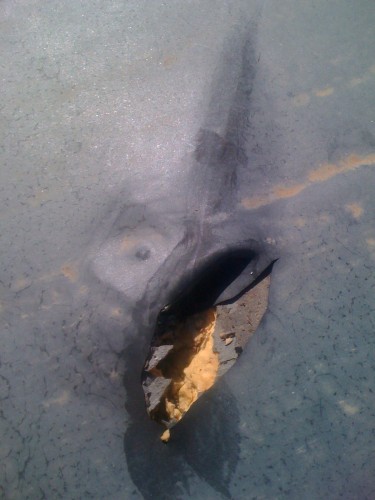 Hole in the rubber. I didn't take a finished picture, I will post it later, being the Cat 3 roofer I am.