Yesterday didn’t go all that great. It didn’t go all that badly either, it just was. I got an okay starting number, 45. But my problem was I wasn’t that motivated. I got to the race way too early. Trudi was planning on going into Madison for the Farmer’s Market, I guess it is great. But, she decided to not go because it started drizzling and I didn’t have anywhere to hang out in the wet.

So, I rode between each race. The course was squiggly. And the surface was pretty bumpy. I was having problems coming up with the right pressure to ride. If I got below 30 psi, my tires were folding over and above that much, it was super harsh. I enjoyed watching my buddy, Bill Elliston school the master’s 35+. He rode a pretty good race and is leading the series now.

The women’s race was a one woman show with Katerina Nash smearing everyone. Maybe not so much by time, but by making it look easy.

The men’s race was pretty stacked for a US C1 race. All the best guys from the US, plus a handful of Euros. Like I said, I was # 45, so I started on the 6th row. The starting stretch was pretty short so there wasn’t much time to move up at all. I wasn’t nervous the least. That isn’t good. I never do well at a race that I should be nervous at and am not. It never really rained hard enough to make anything muddy. If anything, it firmed up the course some.

I wasn’t horrible. Just pretty bad. I never passed a soul the first lap and was in the 40’s. I eventually moved up to the upper 20’s before screwing up a little and getting passed by a group of 5. I started feeling remarkably better with 3 laps to go, but then disaster struck. Well, not disaster, but bad luck. I started hearing a ticking from my rear wheel of something hitting my chainstay. It sounded like a rock caught in a MTB tread or something. It wasn’t every revolution, but pretty often. 1/2 a lap later I was riding on my carbon rim. I had a drywall screw sticking out of my rear sewup. I happened to be really far away from the pit and less than a stone’s throw from my van. Super easy, no brainer, choice.

I had 2 1/2 laps to go to the finish. I would have probably finished around 30th or so, but I would have liked to have ridden the last two laps to see if I was going to get going better. I was much better than St. Louis a couple days ago, but not stellar by any means. You have to be pretty stellar to have a good result in a race such as this.

Jeromy Powers was pretty stellar, but made a couple mistakes by taking some risks and it probably cost him the race. I was trying to spectate as much as I could, while riding the open fields, but the leaders got out of sight fairly fast. It is good that Ryan Trebon won. It is better if Americans win on our home turf.

I don’t know what course they are doing tomorrow. It is supposed to rain most of the night and all day tomorrow, so it should be tricky, which I’m looking forward to. I went and got a prescription filled for eye antibiotics, so hopefully, I will be seeing better today.

I guess we’re driving directly back to Kansas after the race. It is something between 8-9 hours back to Topeka, so it is going to be a late night. That is fine. I like driving at night. 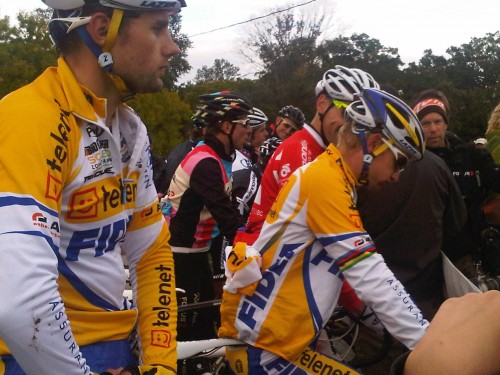 Bart Wellens and Co. at the start. 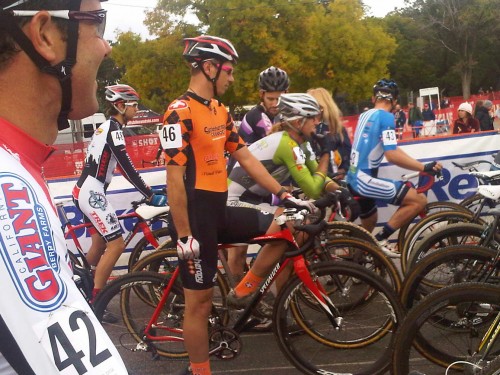 The back doesn't seem too nervous before the start. 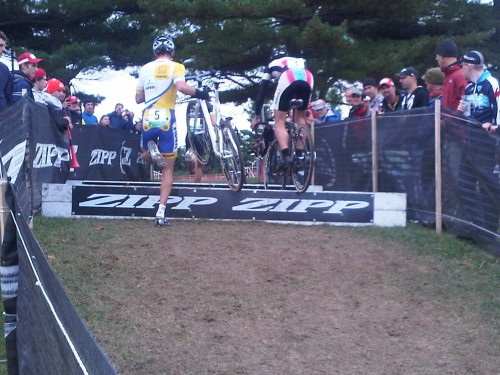 J-Pow bunny hopping the barriers. It cost him later. 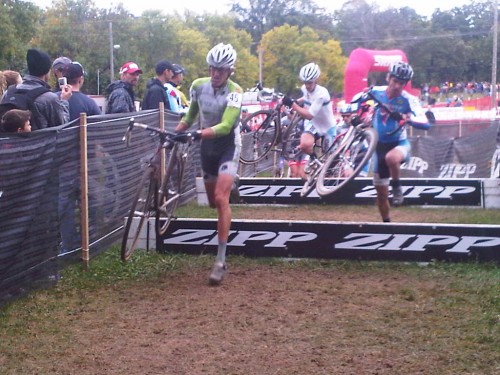 Me not bunny hopping the barriers. 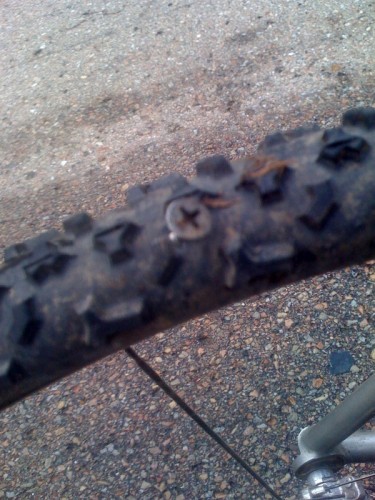 Drywall screw in my tire. 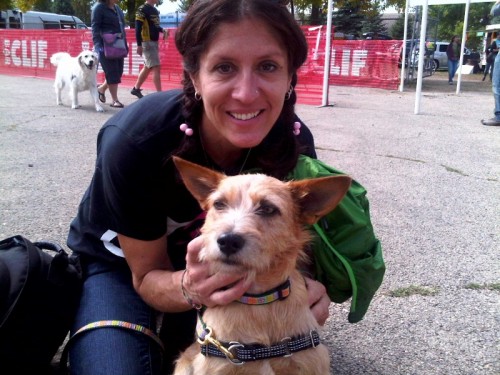 My friend Monique with her dog, Zaza (?), a dog she rescued down in Haiti and brought back to Wisconsin to live with her. 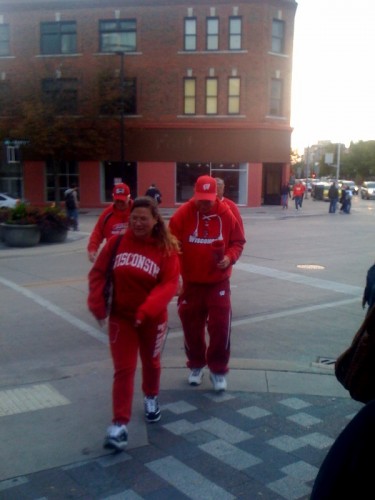 We went down to State Street in Madison to eat after the race. A UW football game just got out. Man, what people will dress like to support their team. This is not a good look.