I was screwed up this weekend and thought that there were races close. They are next weekend. I should have just packed up the van and headed to Colorado, but I decided to ride 4 hours yesterday. I’m not sure what is in store today. I’m riding soon and then maybe heading West. Yesterday was a great day to ride bikes in Kansas. It didn’t get sunny until the afternoon and I was nearly finished by then. It never got more than the upper 80’s all day.

We’ve been without electricity since last Thursday night’s storm. It is kind of a drag, but not as much as you’d think. Not having hot tea in the morning is the main problem for me. We hooked up a super long extension cord to the next door neighbor’s generator, so we kept everything in the refrigerator from thawing. I hear it might not be until Sunday night now until it is restored. I wonder what it would be like in Bagdad or a place where you have power at just odd hours of the day and night. Nothing you can plan on. You’re ready to cook dinner and then, gone is the electricity. It would be frustrating at best. It seems kind of weird that the water and hot water are available. I know that it’s not hooked up to the electricity, but for some reason, it seems like it should not work too.

Okay, I saw that Ned finally won Mt. Washington Hillclimb outright. Man, can he pick his races. I was trying to get a hold of him before I went to Paris last month and he was in Spain eating dinner with Roberto Heras at a banquet. He finished 2nd to Tyler Hamilton once, so in my mind, he’s won the race twice now. Tinker was 2nd place. Maybe I should have went out there. Probably not. I hope I have a chance to catch up with him some next week.

We rode yesterday through a town called Burlingame. It is about 25 miles southwest of Topeka. They have the widest, most bricked street I’ve ever seen. I’ll post a photo below. It has a pretty nice downtown area for such a small town.

Okay, I’d better get dressed to ride. I think I am leaning toward heading to Colorado later this afternoon. I don’t think I’ll catch up to the Pro Challenge until Wednesday at the earliest, but you never know, I might head down to Colorado Springs to watch the prologue. The Coor’s Classic Reunion is on Thursday night in Vail at the Four Season’s and a ton of people I haven’t seen for ages are going to be there. It should be fun. 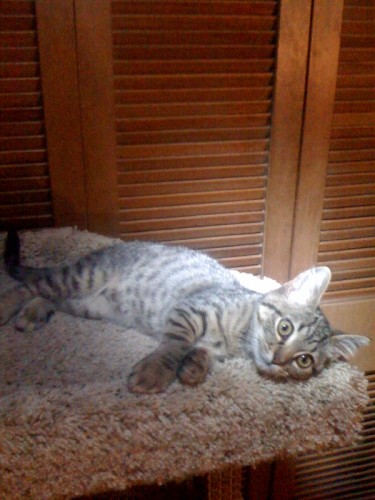 MicroCat doesn't seem to be bothered by the lack of light at night. I found him rolling around on his cat tower last night. 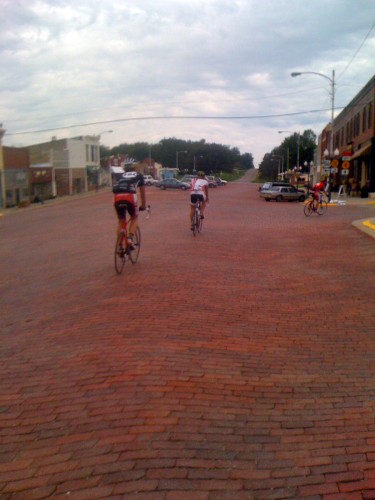 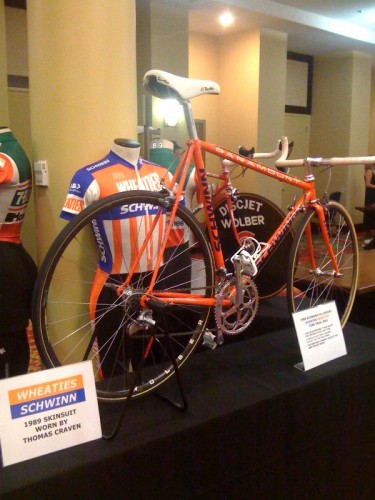 I guess my Wheaties Schwinn TT bike was on display at the banquet for the Pro Challenge last night in Colorado Springs. I don't remember riding this bike much. Maybe in the DuPont Race. Coor's Race? I don't know. 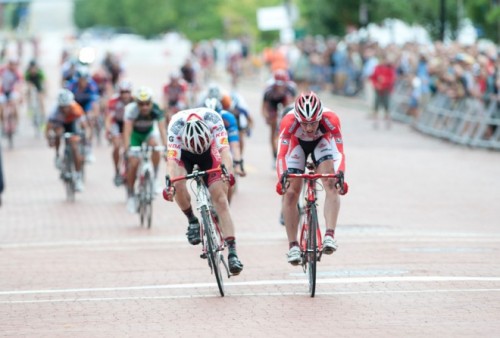 Near local, Brad Huff, gets nipped on the line by Eric Young at the US Pro Criterium Championships yesterday in Michigan.