The last two weekends have been good for my bike racing soul. Both the criteriums I’ve raced have been great. The courses have been super, the promotion top notch and they have been just all around fun. Kind of like it “used” to be.

The East Village Criterium yesterday was a surprise. It was kind of a last minute decision to head up to Des Moines. I was ditched by everyone from Kansas, so I was solo. It’s only 3 1/2 hours from Topeka to Des Moines, so that was nice. Arriving at the course, I was pretty stoked. The race setting was awesome, at the foot of the Iowa State Capitol, with a super view of the Des Moines skyline. The course was on a hill, so it was pretty challenging.

There were less than 40 guys in the race, I’d guess. I knew that I’ve have to be going pretty well to have a good result. I hadn’t travelled to a regional criterium alone in a while, so I knew it might get a little frustrating with lots of guys watching me. That wasn’t completely the case, but it was. I was going just okay. As I think back, I think that I was just not in the right mental state. You have to be in a super aggressive mode if you want to excel at a race like this. The best defense is offense for sure. My problem was my offense was mediocre.

Things went pretty well right from the start. Almost instantly, I got into a move with 5 other guys. And we stayed off the front for about 30 minutes. The problem is that we didn’t really work too well together. I’m not sure if it was because guys were at their limit or that they were some strange tactics going on that I didn’t understand. This was the Iowa Cup finals, with the best all around rider from Iowa being decided afterward. It was double points. I am not up to speed on what that was all about, so it kind of threw a wrench in trying to read the race tactics some.

Anyway, the 6 of us never got too far away, but with the course being essentially half uphill and half down, it seemed okay to just keep the pressure on. Eventually some other guys started bridging up to the move solo. So after a little while, there were a bunch of guys sitting on the back. I went pretty hard for nearly a lap to try to shell some of our new arrivals, but I only got rid of a couple. That is when it went badly. The best guy in the break was a Ride Clean guy. Sorry, I don’t know his name, but I should and will. I was dropping back to see what the composition of the group was when he took off. He went pretty hard for a lap, but looked like he was going to sit up, but no luck. I should have went then. But I missed it completely. I figured that 6 of us had just been chased down by the field, why would he be able to ride away. But, no one seemed to have any interest in chasing. I got into a couple small moves, but everyone was intent on chasing then. Eventually there were only 10 guys left in the field and I knew it was over.

So, I just went to the back and sat for the last 15 minutes. A Mercy/Specialized guy took off solo too, so we were left going for 3rd. But, I blew that too. I lead the sprint out up the hill and you needed to be to the last corner in the lead because it was 100 meters downhill to the line. One guy just got by me right before the corner, so I ended up 4th. That was okay considering. Considering that I didn’t really bring my A game to the race. Not physically or mentally. It about the place I deserved. The new bike was perfect. It felt like mine. It still have it’s Andy sticker though. The Madones have internal cable routing and it always concerns me trying to stretch the cables after installing them. If anyone has any great ideas how to do this easily, I’d appreciate them.

I have to be happy because I felt pretty okay. Not awesome, but good, which is all you can ask for. Anyway, there is no way to express how nice the day was. Like I stated above, the race was really well ran and super cool. At least 20 people thanked me for coming. No more than that. But, I have to say thanks to Rasmussen Bicycles and all the people that put on this event. It was what bike criterium racing is really about. A bunch of guys getting together, hopefully at a cool place, and riding around in circles fast.

Michael Fatka and Lynn drove down from Ames to watch. I ate with them before heading up to Cable. Bromont had no idea where he was going, his favorite place on the planet Earth. So I’m going to be riding MTB mainly for the next three days and then head South and go to the Iowa State Fair mid week, when the crowds are less hopefully. I have a pretty good life. 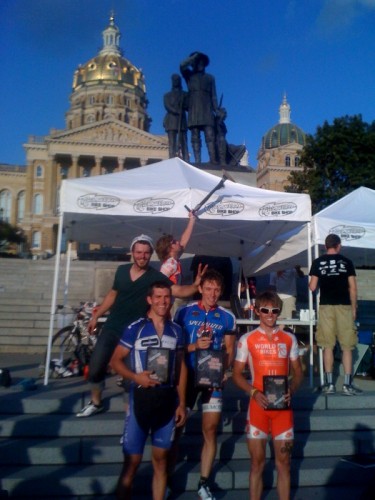 Overall Iowa Cup winners with the Capitol in the background. Nowadays, it is kind of unusual doing the awards, ect. on the steps of a state capitol. 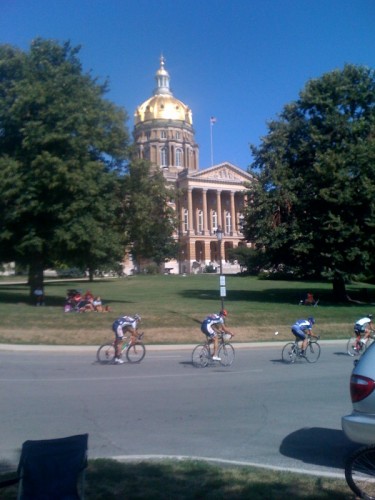 Race photo from the 3's. 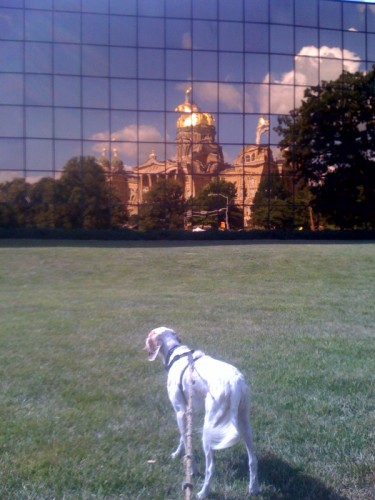 Bromont getting a little spooked by the reflection here.