This race was super enjoyable. The race is in downtown Edwardsville, Il. Edwardsville is just 30 miles from St. Louis, but you’d never know you were that close to a big metropolitan area. The promoter did just about everything right. More than right. All the way down to cooling areas inside for the riders to rest before the race. The town itself is really behind the event. The town is crazy bike friendly. I was told that there are 134 miles of bike trails in the surrounding area. That is probably more than in the whole state of Kansas.

The course was great. .8 mile and pretty technical. It was a figure 8 with one end being small and super technical. There were less than 50 guys in the Pro 1 race. That is mainly because of Elk Grove happening just a few hours North. And it was stupid hot. That word stupid is how the waitress at the Starbucks described the day. It was appropriate. 96/96. That is 96 degrees and 96% humidity.

Since we’d ridden in the morning, there was no warming up. It would have been hotting up anyway. We were only going to try to win the race and not stack the results. With only 3 guys there, you have to be careful how much energy to expend trying to optimize your results. Brian seemed nervous before the race, which is usually a good sign. And it was. He won a $50 prime early in the race and the field was super slow to respond to his move. I knew that it was going to be over quickly. With the far end of the course being so tight, it was very hard getting to the front to respond to anything. The far end was a left, followed by a right, right, right, left, all within 150 meters. And the corners were tight with some manhole covers, ect. making them tricky.

My legs felt pretty strange the first 15 minutes. It might have been because I had panty hose filled with ice in my shorts. Trudi had told me that the BMC doctors had told their riders that putting ice on either side of you groan, where your iliac artery runs, is super good at cooling you. I guess it worked because I never over heated in the 75 minute race, but I have to admit, I was looking forward to that ice being gone. It lasted maybe 20 minutes max.

Anyway, Brian rolled away pretty early with two guys, a Dogfish and Big Shark rider. Man, does that sound strange. Looks like the St. Louis guys are some sort of professional bass fisherman teams. I asked their team mates if that was good for them and they said that Jensen was going to kill them, but a podium was good for them. I was a little disappointed that the race was going to be decided that quickly, without really getting a chance to make the split. But, it wasn’t that easy.

The Bigshark guy crashed on the first tight right had corner and it took him a while to get back to the pit and back in the race. When he did get back, Brian was already pulling virtually the whole lap and they both got dropped. Luckily the field was kind of overheated by them, but not enough to stop aggressive racing.

Bill and I were in every move. In retrospect, I wish I would have throttled it a couple times when we were in a small split because it didn’t work out that well the way it turned out.

With 10 laps to go, they rang the bell for a $200 prime for the field. I was a ways back in the field, but I couldn’t pass that up. It went badly. I jumped late, wanting to get into the tight section in the lead. And I did, but barely, completely set up wrong for the first left corner. I was all the way on the inside curb, having went way too hot, at the wrong angle, going into the left. Anyway, the next corner came way too quickly. I should have just scrubbed some speed and started all over again, but I already had a few bike length lead and guess I didn’t want to loose that. But I did because I wasn’t moving, just laying in the corner.
I just slid out and hit the curb. Everyone made it by pretty well. I wasn’t too ripped up, but my seat post, integrated to the frame, snapped off.

Anyway, I rode over to the pit, looking to borrow a bike to finish. There were 25 place for $5000, so it made sense. But no bike and the field was coming by, so I just got back in with 6 to go. Josh Johnson asked me if I thought it was dangerous riding. I said something like, “not to you, but to me.”. It really wasn’t too bad riding without a seat. The problem was cornering. It is amazing how much you rely on your seat to corner quickly and correctly. I got the hang of it after a couple laps, but was pretty wasted from never sitting. I got to the front to lead Bill out, but he was bumped off my wheel. Tracy Smith was trying to lead out Matt Brandt, but I had to let him go through the tight section. A couple guys had rolled away, so I think the field was sprinting for 4th. Bill ended up 10th. I kind of bagged it, not wanting to screw any body up in the last corner, since it was only 75 meters from the finish. I was around 15th on the day. But, afterwards, I was told the free laps ended at 7 to go, so I was a lap down. It didn’t really matter.

So Brian won alone, but it was a big effort, mainly because of the heat. The prize list was a little top heavy, which I’m generally against, but it is great if you win. It was 5 hours back, so we didn’t get back until after midnight.

Driving back there was a super lightening storm all the way from Kansas City to Topeka. More lightening than I’ve ever seen before. Vertical, horizontal, everywhere. Pretty spectacular. It’s raining pretty hard this morning and is suppose to rain some nearly everyday this week. It’s only 72 out right now, but is supposed to get up to 95. But, this week is going to be better weather, in the 80’s, which is a nice change.

I’m not that torn up from falling, but I re-injured my already separated shoulder. I’ve crashed 3 times this year, once in the rain in Tulsa, once in Iowa City and now this time. I can count on one hand how many times I’ve fallen on my own in a criterium. Okay, maybe two hands. But, I’ve raced hundreds, if not a thousand criteriums, so I can’t complain too much about screwing up every once in a while. We all do and it’s just a part of the sport. I’m not sure what my next race is. I’m thinking about going out to Colorado, but nothing is written in stone, ever. 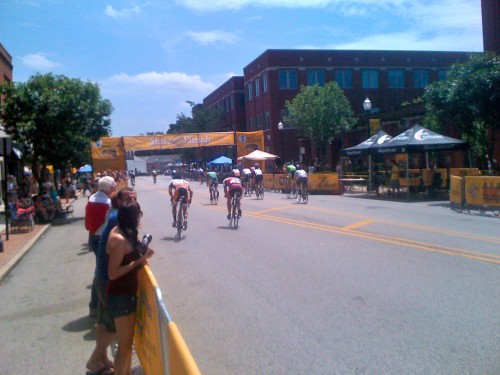 The race was right in an old downtown, super nice venue. 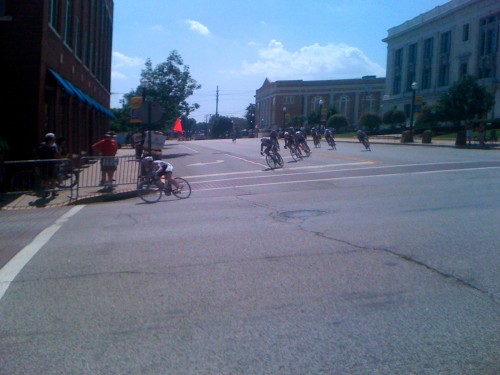 The women's sprint into the final corner. The girl that won got a pretty good jump from behind, but Catherine finished 2nd, which didn't thrill her that much, but it was a good result none the less. 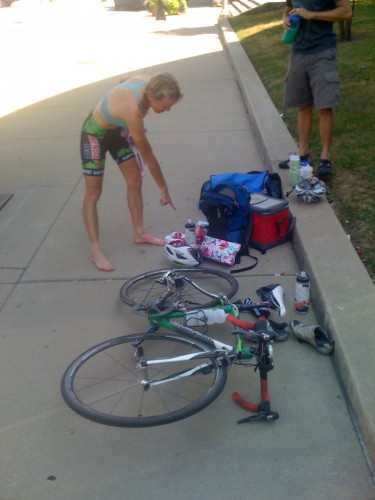 After the women's race and before our race, Brian checking out the yard sale Catherine has going on the sidewalk. 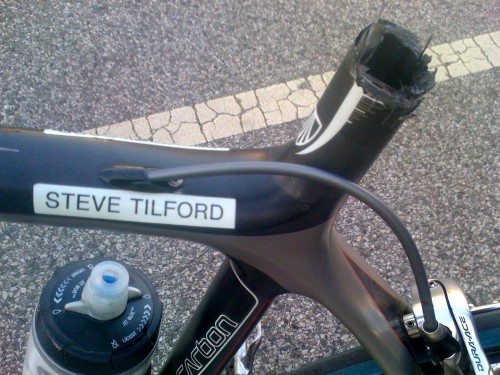 Not good. But it isn't that depressing. I've been riding this same frame for nearly 3 seasons and the seat mast wasn't in that great of shape, so I didn't really trust the frame anymore, probably with good reason. 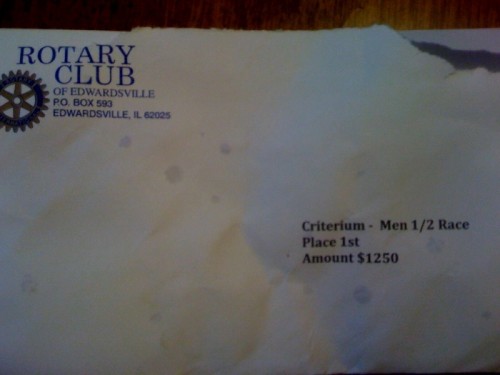 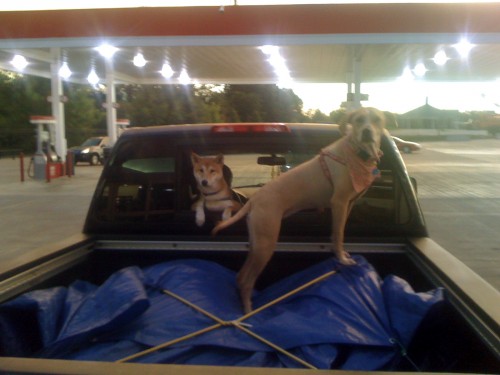 I saw these guys at a gas stop in Missouri. They look like they love travelling.