The sport has changed a lot in the last 10 years. In lots of ways. One way it has changed, that I find not so appealing from a riders standpoint, is the intimidation aspect.

I thought of this because of a story Trudi told me that Michael Schär expressed. He was saying that it was so weird that during the Tour de France, that guys that were “his friends” would scream and intimidate him when he was trying to get to the front to keep Cadel out of the wind. He thought it was so strange that these same guys would be doing nothing the rest of the season and were so amped during the Tour.

But, that is the way the sport has “evolved”. I think it started here in the US when all the track riders from Australia and New Zealand started coming here. That is their way racing down there. And they brought it our way. At least that is when I first started noticing the problem.

There is a certain hierarchy in the peleton. But that hierarchy needs to be earned. Just because someone is wearing a certain jersey doesn’t give them the right to try to establish their will upon others.

I used to get a ton of shit from Gordon McCauley. Mainly when riding criteriums. It seemed that we were always fighting for the same sweet spot behind the leadout train at the end of the race. He’d yell abunch, but I wouldn’t back down. I could tell he was having a hard time keeping his position, mainly because he was scared.

Then one year, in Anniston, Alabama, it all changed. We were racing the criterium there and it was obvious that it was going to rain. It was at night and I’d let a ton of air out of my tires. The officials said that if it got bad, they were going to instantly go to 5 to go. So, when it started raining hard and everyone started falling down, I took off. And I rode alone. Forever. After about 5 laps, they switched the laps counter to 10 to go. I ended up getting caught with about 200 meters to go by a small group and ended up 4th I think. Gordon had quit the race and was watching. Afterward he came up and said something like, “I’ve never seen someone go so fast through corners in the rain, at night. I guess I don’t have anything to worry about for now on.” It was a pretty nice thing to say. I never heard a peep from him since.

Anyway, the yelling thing seems to be a way that a rider tries to establish his dominance of others without having to put out any physical effort. I can’t believe how many time I hear pro guys yelling. It is never the other way around. I happened to do a bunch of criterium in the rain this spring and it was crazy. The same guys that would be screaming about the moves others were making were making the very same moves, much worse, sometimes falling. And it is virtually aways a “professional” rider doing this. But, as we all no, the jersey doesn’t make the rider.

So, when the stakes are high, such as during the Tour, the intimidation becomes extreme. Obviously it came to a head this year with so many crashes on the flat stages when no one seemed to be backing down. Trying to ride in “team formation” in the middle of the peleton is a recipe for disaster, as we all saw. And trying to physically intimidate other riders from “stealing your wheel” doesn’t usually work out that great either.

There are times to use intimidation to try to gain an advantage. But with 30 miles to go in a 120 mile stage of a 22 day stage race, isn’t one of them. I wish the team directors would realize this and quit putting so much pressure on their riders to try to race the middle of the race like it was the end of the race. It is just stupid. Let’s try to use the tactic more sparingly. 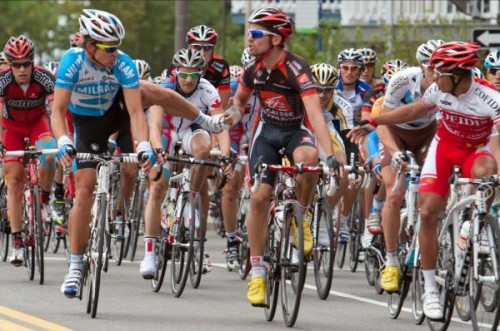