I got a few messages about USADA showing up yesterday at the Texas State Time Trial Championships and drug testing virtually the whole Cat 1 field. Plus some more Cat 3 riders. I haven’t spoken with anyone that was actually there, but I looked at the TXBRA forum and it has a thread about the whole thing, but it’s all rumors at this time.

So, someone racing this event must have popped up on Joe Papp’s list or some other place and USADA was just trying to avoid the circumstantial route. Kind of like when they showed up at Dewey’s house right after Joe Marin last year. It’s much easier when you have a positive test or a refusal than just an order off a computer shipped to an address.

One thing I hate about this testing/investigation methods is that it isn’t always transparent. Like the Phil Zajicek doping thing. Originally it was held behind closed doors and his name only surfaced through the grape vine. It seems to me if USADA has enough information to proceed with a doping procedure that they should be able to announce that name to the public. There might be lots more information floating around out there and it will no be heard unless the whole procedure is in a public forum.

I heard for a few people that a bunch of master guys from the East coast were caught up in the whole Papp deal, but that the FDA had gotten involved and that they had relinquished their licenses and there wasn’t going to be an USADA procedure brought against them. I know it has the same effect, that guys taking drugs aren’t racing bikes, but I think that anyone they competed against deserves to know that they were beaten by someone taking drugs. I think the rational here is that USADA doesn’t want to spend of money bringing cases against a bunch of masters and that if the FDA threatens or does the job of ridding the sport of this guys, then there is more money to use against more public riders that are winning or racing higher level events. But for some reason it seems wrong that we don’t get to know who was involved and “caught”.

It going to be interesting to see if anyone is caught in this Texas thing. I don’t even know exactly who was racing the event. I’d be surprised if it is all for naught because USADA wouldn’t have been there unless they had some pretty strong evidence.

So, I just got a text from Jared Nieters (XO Communications / Battley Harley-Davidson), who was down in Charlotte at the Presbyterian Hospital Invitational Criterium last night. He said USADA showed up in full force and tested 10 guys there too. Guess USADA wasn’t only looking for masters now. Big crack down on home turf. It’s about time.

I got this email from Dave Wenger today, current US Elite Criterium Champion and all around good guy, from Austin –

Hey Steve-
I read your blog and figured I’d reach out. USADA was at the event. They instructed me after my finish that I was to head to doping control. A bit shocked, I found ~10 other bikes outside of doping control and they tested the entire Pro-1 field. A handful of other randoms where in the building for testing, but I wasn’t paying too much attention to who was/ was not there. From what I remember, everyone from the Cat1 field was there but there might be a guy I don’t recall making it to the building.

After my test, I spoke with Bradley Guye from USADA (he gave me his biz card) who was running the operation. He said that is was very hush-hush (paraphrasing here.) No one knew. The promoter didn’t know about it, the officials didn’t know about it, and I sure as heck didn’t know about any testing for a 11 rider field. Second hand, I did hear that some riders staying at the only hotel in town the night prior to the TT did see someone at that location wearing USADA clothing, so there might have been the slightest of an inkling that doping control could be at the event. 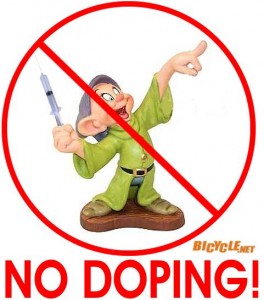 20 thoughts on “Dope Testing in Texas and North Carolina”