I thought the TT was super interesting last Saturday. Being there, it was fun watching it on a split screen on French TV. Like I posted before, I can’t believe how badly that both the Schlecks rode the TT. Not that their individual results were terrible, both finishing in the top 20 of the stage. It was that neither had preridden the course and how badly they set up for the corners and how they handled their bikes over the speed humps. It was like they had never ridden a TT bicycle in their lives.

Cadel on the other had looked very aggressive. Why I’ve been thinking about this so much is that at the BMC party, Cadel made a little speech and said something about how enjoyable the last 4 km of the TT were. He said he knew the times and felt no pain. But he said that he wasn’t given the times to Tony Martin and implied that maybe he should have be told that he was so close to winning instead of being told to take it easy.

Cadel was only 2 seconds behind Martin with just 3 or so km’s to go. Watching the race, I was thinking that he would win, since he was 21 seconds (???) off at the first time check. So, he was going much faster the end.

It sort of bothered me that he wasn’t given the split to Martin at the end and was instead told to relax some. But, I’m not sure I’m correct in this thought. Winning the overall is obviously the most important result. But giving up the stage to minimize a risk that is nearly nonexistent seemed sort of chickenshit. Not by Cadel, but the other end of the radio. I think he should have been given the split and he could decide himself how to ride the last 2 miles. He rode the race in the rain during the Dauphiné last month and didn’t fall. It was dry on Saturday. When you’re only 2 seconds behind that close to the finish, I say that you should try to win the stage and the race. But that is just me. Who am I to question BMC Team Directeur Sportif John Lelangue?

I could hear it in Cadel’s voice that he would have loved to win that stage. But he really didn’t get the chance in the end. Like I said above, I’m not 100% positive about this view. I don’t want Cadel to be a ball hog and spreading the wealth is admirable, but that applies more to mountain top finishes, etc. and not to individual time trials.

Maybe I’ll get some good comments here that will help me form a less wishy-washy opinion. I’m kind of jet lagged and not thinking that well in general. 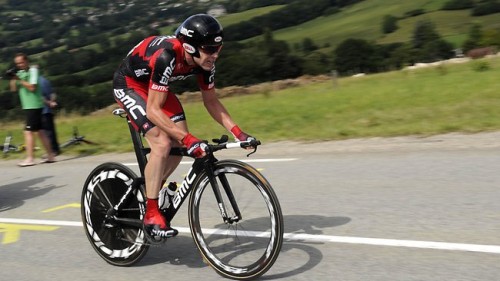 23 thoughts on “Tour TT Results -Give Cadel the Information”