This Tour de France was pretty great. For lots of different reasons, but mainly because of the aggressiveness of the riders. Lots of guys threw caution to the wind to try to get and retain the yellow jersey. Thor held and defended the jersey amazingly. Then Vokler did the same. Contador and the Schlecks tried their luck to get enough time to make the TT yesterday moot. But, Cadel rode like the wind, a super aggressive ITT, and showed that he deserved to win the Tour this year. I know lots of good riders didn’t make it to Paris. But that is the way of the Tour nowadays.

I can honestly say that the two previous days to the ITT were two of the best days I can remember recently. It was very impressive how Cadel controlled the race from behind, banking on the fact that he could time trial so well. And both Thor’s wins and his countryman, Edvald Boasson Hagen, were super exciting. I do think that there seems to be more natural riding this year. There aren’t 6 guys left from one team setting tempo on the hard mountain stages. It was mano a mano, just like it should be.

I wrote a lot earlier about descending, before it became the hot topic of the media. It was amazing how bad some guys can be at certain skills and still be considered contenders for the overall Tour de France title. I’d have to criticize the Schlecks, both of them, for not riding the TT course before the race. I was watching the TT live and couldn’t believe how much time that both of them lost just on bike handling skills. They were going through the corners so much slower than Cadel, it was embarrassing. And on the road where there were raised, speed bump sections, they weren’t getting light on their bikes, losing tons of time. You’d think that would be second nature by now. I don’t think professionals nowadays, spend enough time just riding on their bikes, messing around. Messing around with friends, etc., learning how to ride their bikes, thus how to race their bikes fast. It is kind of sad.

Anyway, it is organized chaos here in Paris. Today is just ceremonial, of course. Except for the green jersey, everyone else is going to just ride in. This year, as last year, I’m amazed how much organization it takes for this whole event to happen. The team car, buses and trucks are just starting to pull into Paris. It is a circus. Just the parking is a circus.

Alright, I’d better go drink some more espresso. I only got 5 hours sleep last night and it’s going to be a pretty long day and night I predict. 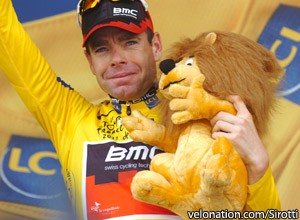 Cadel finally got his lion. Just at the right time. 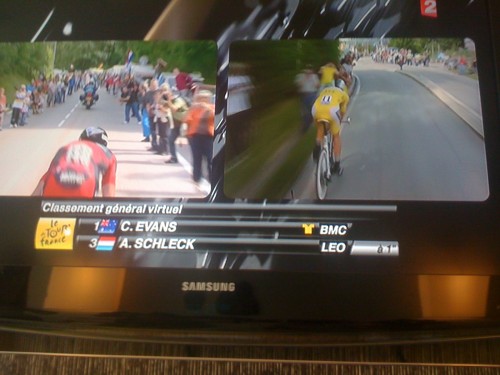 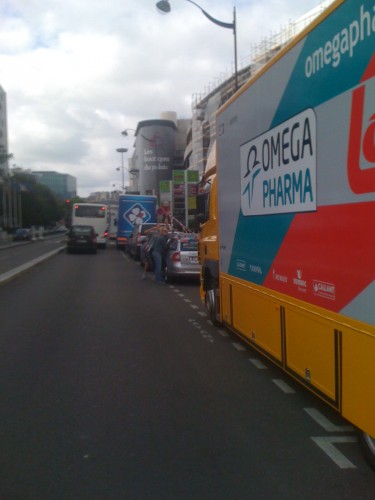 The trucks and team buses have just starting arriving and doing their double parking nightmare.

7 thoughts on “One of the Best Tours I can Remember”