Brewer’s Hill has always been an interesting race for me. I like the area in Milwaukee. It is ever changing. The race is in front of the Schlitz Park and the old brewery. The renovations and construction around the area is always in flux. I can’t believe how much they are building along the river. I guess that is the way that old cities ebb and flow.

I’ve never raced this course. I’m pretty sure that it is the first time they’ve used it. The course is great. Not hardly a mile course with a pretty good big ring climb and now a false flat for a few hundred meters before a technical 5 corner descent with a chicane with 130 meters to go before a very short sprint. I like finishes like this, where position is key.

The weather was just holding. They had to suspend the women’s race after 20 minutes and then restart it after a huge line of thunderstorms came through after about 30 minutes. Our race finished at 7:45 and then a deluge. The course would have been treacherous in the wet.

Our race was good. Pretty hard I guess. I was never really on top of a gear. I had a few bright moments, but then faded. I tried to stay somewhere in the top 15 most of the day and I did an okay job of that.

Daniel Holloway, KBS/National Professional Critereium Champion and Rudy Napolitano, Monster Media, rode away early in the race, never to be seen again. I’m not sure what to make of that . There were a ton of AeroCat riders and Kenda guys at the front of the race, so I thought that it would be assured that the break wouldn’t succeed. Guess I was wrong.

After the fact, I think those two teams must be racing for the overall team competition, and are just screwing away individual race wins if that is what it takes. There isn’t any other explanation. Tactics like this make it super difficult for individual rider, like myself, be able to read the race at all.

Nothing much else happened the whole day. I tried to win a $100 prime, but got into a little elbowing match with Kayle Leogrande and lost. That kind of gassed me for a couple laps. It is very hard to recover from an all out effort when there is a pretty hard hill 100 meters later.

Groups keep splitting off the front, but with 3 to go, it was all back together. By all, I mean the few survivors of a very hard circuit. I don’t know how many guys finished, but it couldn’t have been over 40. It was carnage.

I have no acceleration right now, but I have an ability to sustain the speed after accelerating. I got into pretty good position going into the final lap. 3 AeroCat riders, 2 KBS guys and Jonathan Cantwell were ahead of me. I knew there was going to be a huge surge going up the climb on the final lap, but I had decided not to use any energy there. I let a ton of guys pass me and planned to get my position back on the false flat on the top. That somewhat worked. I got a little behind and jumped a smidgen late and went into the corner I was hoping to lead into 4th, behind two AeroCat guys and Cantwell. But, another rider from Foundation something got around me on the outside and took Cantwell’s wheel. I tried to go wide around him on the last right before the chicane, but he hit his pedal and his rear wheel jumped out towards me. I grabbed a huge handful of brake and Rahsaan Bahati, Pista Place, came through our inside and passed us both. There was no passing on the last stretch, so I ended up 6th in the field sprint, 8th overall. Here is the Cyclingnews.com report.

I could have maybe won the field sprint doing a couple things differently. I’m not the fastest guy out there. Not even close, but it was a good finish for my abilities. I just didn’t execute well. I was pretty beat at the end.

I guess that Daniel Halloway’s pedal broke and he rode the last few laps nursing it home. I heard he’d told Napolitano that he couldn’t sprint because his pedal was broken. But, Rudy took his time getting to the finish line and putting his arms up, etc. and Daniel just nearly came by and pipped him at the line. I guess it was close. Anyway, I heard all this from 2nd hand sources. Hopefully, Daniel was just trying to make it look close because there is hardly anything worse in the sport of cycling than going back on a deal.

So, we’re going for a ride in Wisconsin this morning and then driving back to Kansas for the Tour of Kansas City that starts on Friday. I’d really like to stay and ride here, but local obligations take precedent. 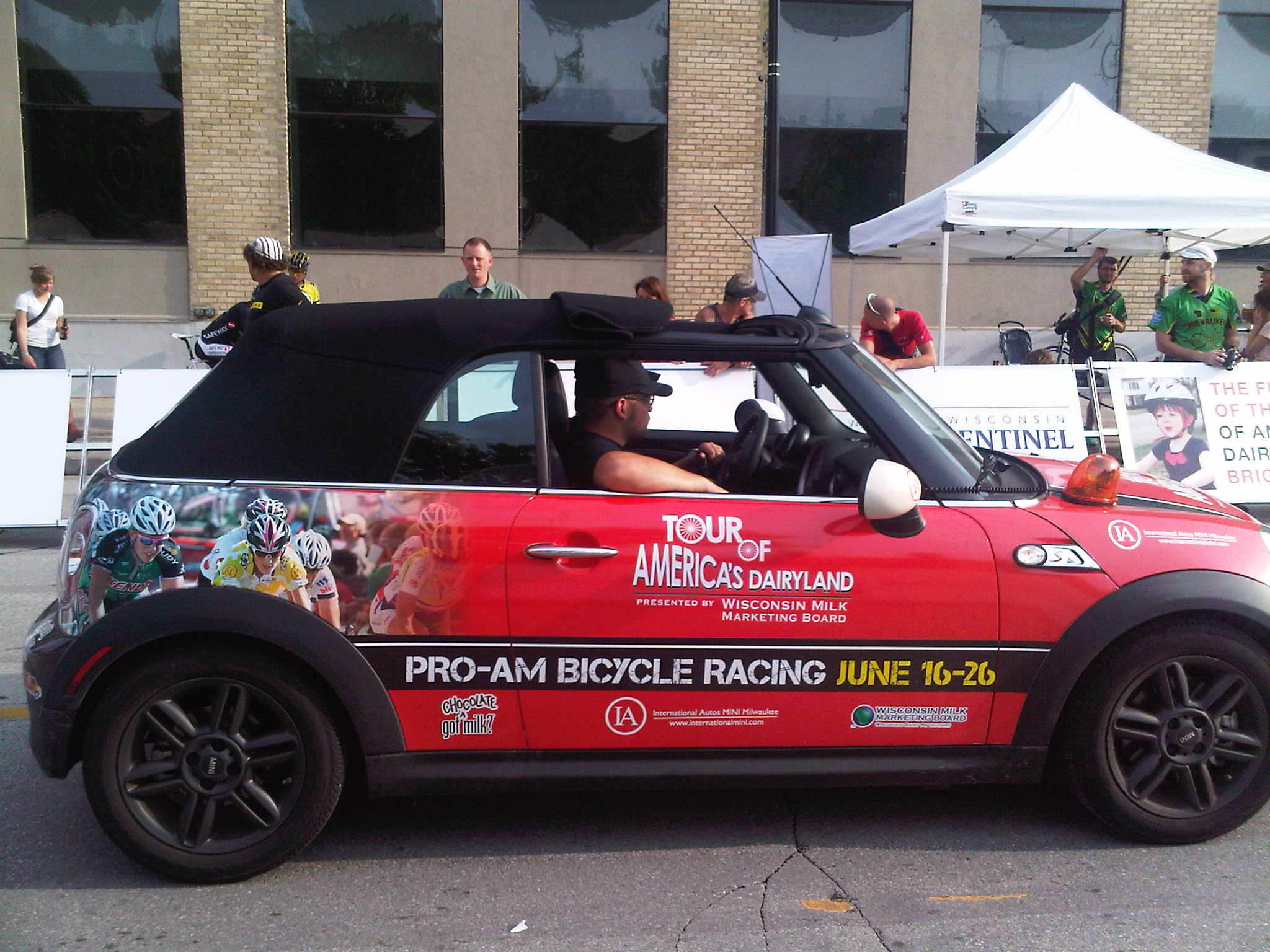 They have a bunch of Mini Coopers S for the offical car. Some are AWD convertibles.. 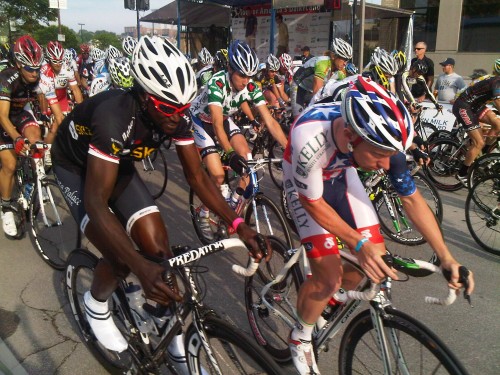 Here's a photo of the start. Kind of looks like Daniel Halloway is already throwing a shoulder into Rashaan. 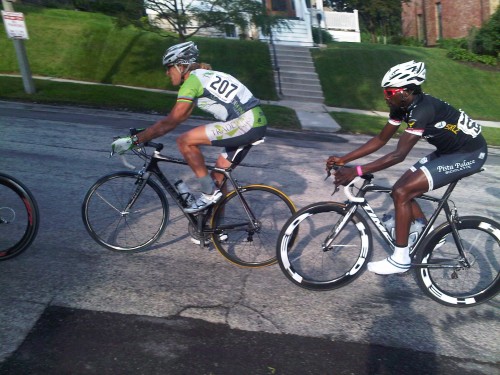 Climbing the hill on my seat, which wasn't normal. 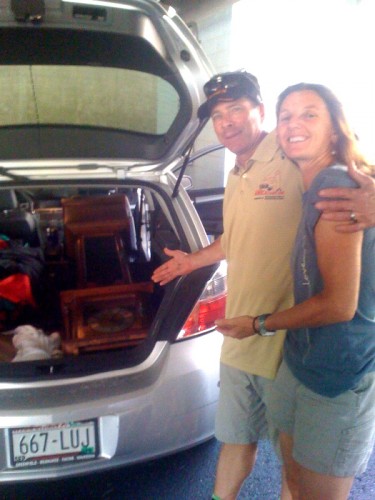 Tom and Trudi, with the transported clock. Tom picked it up in the smallest Saturn that they make. Go figure. 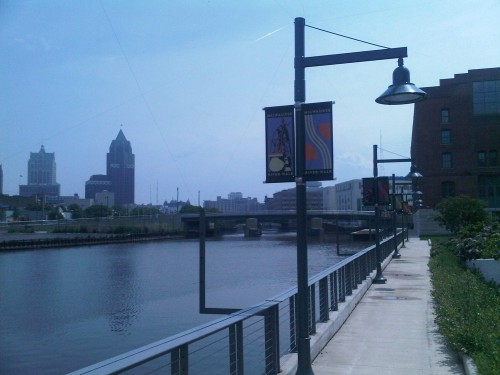 The riverwalk near Schlitz Park. 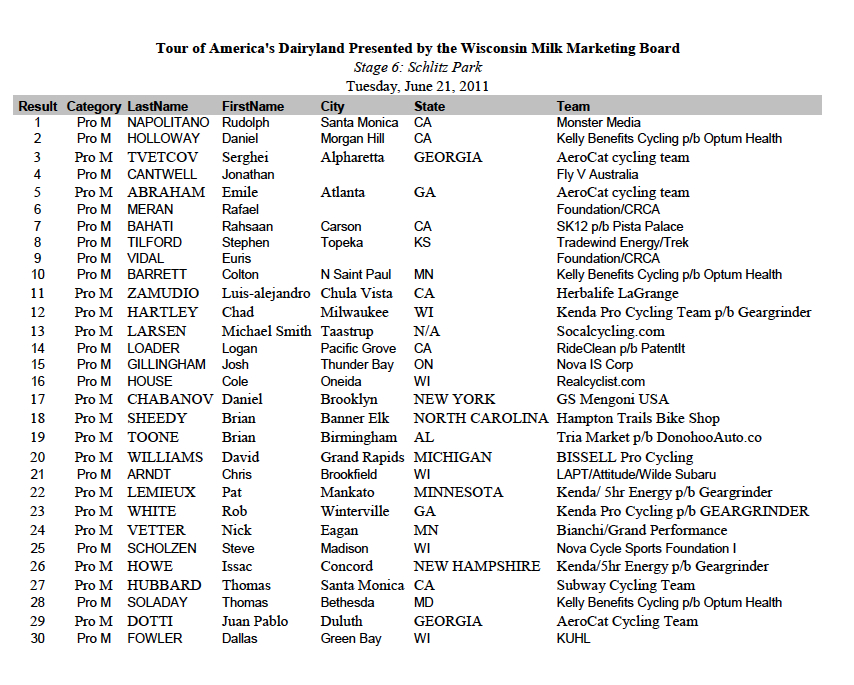