I obviously have a relationship with lots of cats right now. I know that I can’t save all the cats in the world. Or even many of them. But I do feel I have a certain responsibility of addressing the issue, at least on a micro scale.

I think it is funny when people say they aren’t cat people or don’t like pets. I kind of laugh to myself thinking that they have no idea what they are missing in life if they actually believe that.

I listened to last week’s This American Life yesterday and one of the segments was on some brothers that lived in Baghdad and of an American that had befriended them. The wife of the American was telling the story. She talked to the Iraqi brothers weekly on the telephone and told them she was just going to school and working at a shelter for dogs. The Iraqi couldn’t understand the fascination that she had with dogs. He told her in Baghdad, dogs were very dangerous. That they killed dogs. He killed dogs. He told her that dogs would come after a suicide bomb attack and take off with the body parts of the victims.

Isn’t it strange how an animal that humans bred to be their companions are treated so much different when humans existence is in question. I guess when it is a life and death struggle, then there is a completely new set of rules. It’s the same in Africa with people shooting gorillas and elephants, etc. I think the survival instinct of humans is strong. Strong enough to over ride any morals that are engrained in them.

I’m so fortunate to be be in a postition of being able to help cats get their footing in life than in a position of having to kill dogs to stay alive. It was just plain luck that is the case. 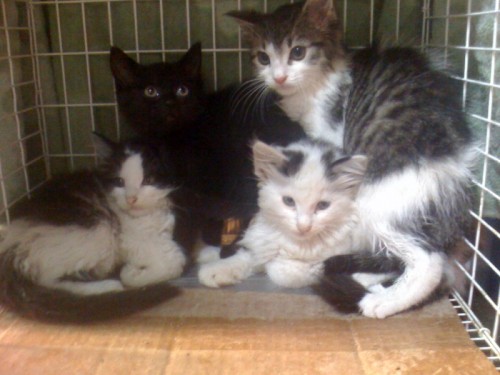 New kittens in the rabbit cage. 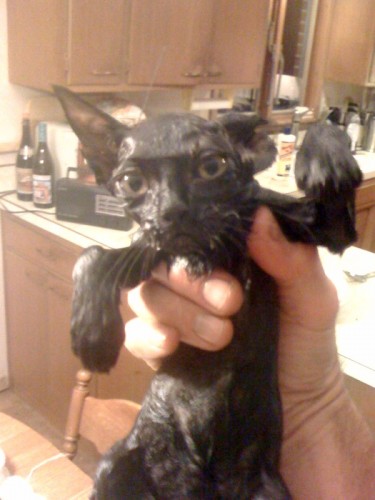 The stunted black kitten looking like an alien after bathing.