My phone was ringing off the hook after Velonews reported that Phil Zajicek had accepted a lifetime suspension for doping a few days ago.

I think Velonews did a just okay job this time reporting the story. For some reason, in the past, Velonews has tended to avoid any stories on Phil. The rumors on Zajicek’s situation with Joe Papp was rampant throughout the racing community, but for some reason, Velonews was not willing to give it any space.

The weirdest part of the story is the quote that Phil sent to Velonews to “announce his retirement”.

“Today, I have accepted a lifetime ban from the sport of cycling,” Zajicek said in an email sent to VeloNews. “I have had an enjoyable and successful career which has taken me to all corners of the of the globe and I’m grateful for everything cycling has given me. It’s time to walk away from the sport and begin the next chapter of my life with the tremendous support of my wife, family and friends behind me.”

Unless I missed something, I’m positive that the phrase, “walk away from the sport” would not be appropriate here. Booted out of the sport, forever, but not before using every avenue available to avoid the sanction would be a better description. Pretty strange. I think that if I were Velonews, I would be hesitant to print something, so ludicrous, without some other contact and a follow up.

Maybe we should throw a little retirement party for Phil? Or better yet, have a final Phil Zajicek Memorial Race, his final race, and all the guys he beat up on all these years could come back and pay tribute to his illustrious career. But, Phil would have to watch, since he already accepted his suspension. Shoot.

Well, I think the facts speak for themselves. It is a sad situation when such a nice guy, like Phil, uses the “system” to such an extent to try to avoid the penalty of his infractions. That is what is bothersome in this whole denial situation.

Presently, everyone knows the rules of the game. Doping is frowned upon now. Pretty much across the board. And the sanctions are known too. So, if you’re taking the moral issues out of the equation, then it is a risk/reward deal. The riders readily except the rewards, but don’t ever want to except the sanctions.

I wonder where this whole thing started. It seems pretty strange to me how many guys that used to ride for the Navigators have turned up positive over the years. It was pretty apparent during the time the team was together, but it is amazing how long it has been going on, but on the the other hand it is amazing how many are getting caught. And this isn’t mainly through testing, mind you. Like David Millar said in his video posted earlier, there is not a risk of getting caught. Obviously, he was wrong in that assumption.

So, ex-Navigator riders, Kirk Obee, Nathan O’Neill, Adam Sbeih, Vassili Davidenko, and Phil Zajicek have all been “caught”. I might of missed a couple. Marty Nothstein was named in the Obee case, but no one seemed to be too interested in that since he is retired. That is a lot of guys from one program to be caught, since it is so hard to be caught. Makes me wonder what the other guys from the Navigator program were/are doing? Sorry, but that is how it works. You associate with a majority of guys that take drugs to race, you throw your name in the hat to be included with them.

I don’t know when it will all end. It was so apparent over the years when the “racing” was going on. The difference here was that most of this occurred during domestic racing. It never ceases to amaze me how much tolerance this sport has to absorb all this stupidness. It will probably surprise me when it fails to happen too. 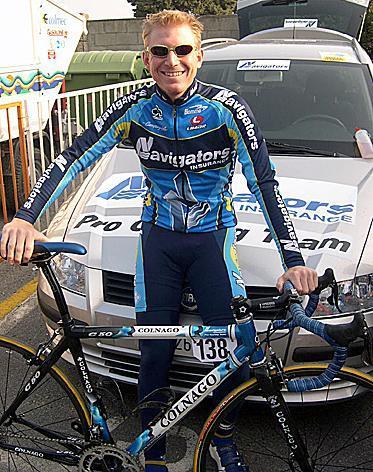 Those were the days back on the Navigator Team.