Last weekend was strange. Strange in the fact that nothing went according to any type of plan, or history.

Snake Alley is my favorite race of the season. Not just because the course is good for me, it is because of the setting and the enthusiasm. I really like downtown Burlington, Iowa. A dying railroad town trying to reinvent itself. I love the big, warehouse-like buildings that have endless possibilities. Every year it gets just that much nicer. I like to see the progression.

Anyway, I don’t have a ton to write about the race itself. It went badly. Not anyones fault, really. Obviously, by all the photos on Facebook, etc. I had a issue keeping my handlebars connected to my bike. The carbon steering column broke. This could be from any number of reasons. I changed stems this season from a carbon to an aluminum, so this might be the issue. Maybe I overtightened the bolts, I don’t know. All I know is that I wish I would have been having a worse day on the bike and it wouldn’t sting so much.

I felt pretty good. Not great, but good. Good enough that I was never stressed while I was riding. The course suits me. A hard effort up a brick serpentine climb and then a technical 3 corner descent that was wet the first few laps. I wasn’t climbing the best of everyone. Eric Marcotte was going crazy fast uphill. But I think I was going downhill the best. I never went full tilt downhill, but early in the race, when it was wet, I was getting a pretty good gap without trying.

I had a game plan thought out. I was going to just float the race, stay in the top 5 or so the first half, to observe who was riding good. And then try not to be with them at the end of the race. The only rider on my radar the first half was Eric Marcotte. Chad Burdzilauskas and Adam Leibovitz of Texas Roadhouse were going okay too, but not good enough to worry me much. The AeroCat riders were hitting the front on the Snake to slow the group down, so I realized they weren’t a threat.

Brian Jensen, TradeWind, took his time making it up to the front group. He wasn’t lovin’ the wet descent. He immediately attacked when he caught up after 5 laps or so, but the descent wasn’t going that great. I went to the front. Eventually, I let Eric ride up to him, hoping that Brian would follow his line down. That didn’t go that great, so they only stayed off the front a few laps.

So, right when the race was going to get interesting for me, I was climbing, about half way up the hill and pop, my bars felt weird and then the were detached. I don’t really remember having any thoughts of falling. I’m not sure why that was. I just put my foot down and starred in disbelief. Finally, Kim West came over and told me that we weren’t going to be able to fix that and I should get off the road. Less than a minute later, I was sitting on a cooler, drinking a cold beer. A pretty strange, unexpected sequence. I can’t believe how lucky I was not to have this happen on the descent. That would have been super ugly!

I don’t know how it would have turned out, but the race was winnable. I was going good enough, plus I’ve ridden the race so many times, I think I have it down. But, there are no guarantees in bike racing. I have to congratulate Chad for winning. It is a great race to have on your resume and he made an awesome move coming hot into the last corner to take Eric and Juan Pablo by surprise.

And also, congratulations to Iowa local, and one of my favorites, Amanda Miller, HTC, for winning here again. She made it look easy. It has been great watching her progress the last few seasons. Endless possibilities here.

Okay, can’t dwell on the past too much. There is always next year, I guess. 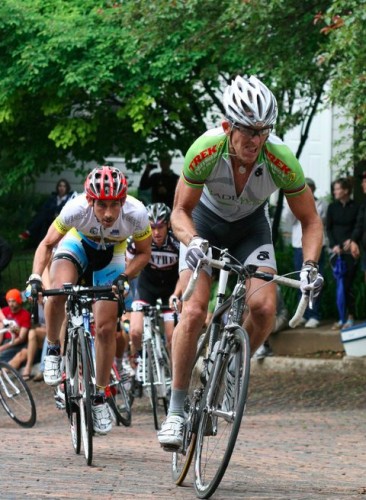 Leading Chad up the climb. 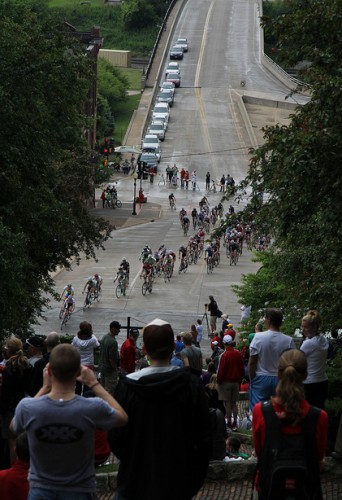 The lower climb at the start. 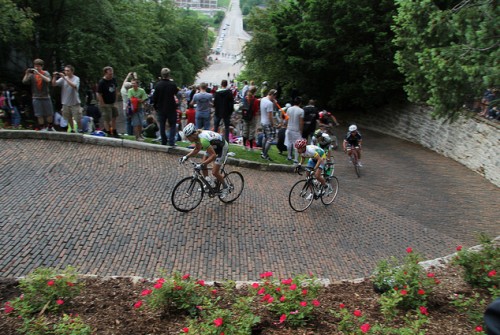 Nice shot from above. 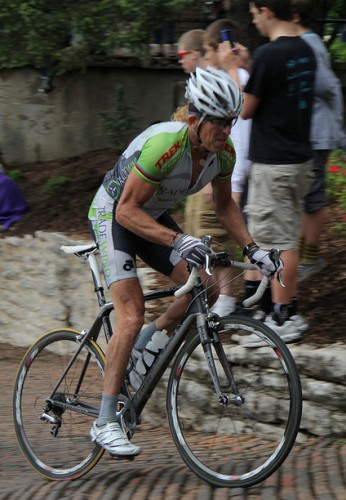 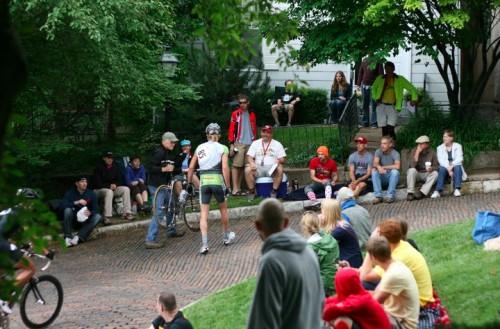 Kim telling me it is hopeless, dah. 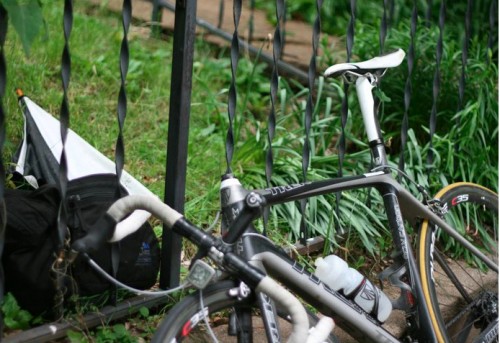 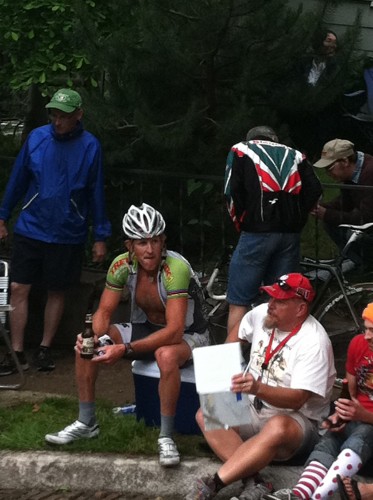 Not a happy camper. 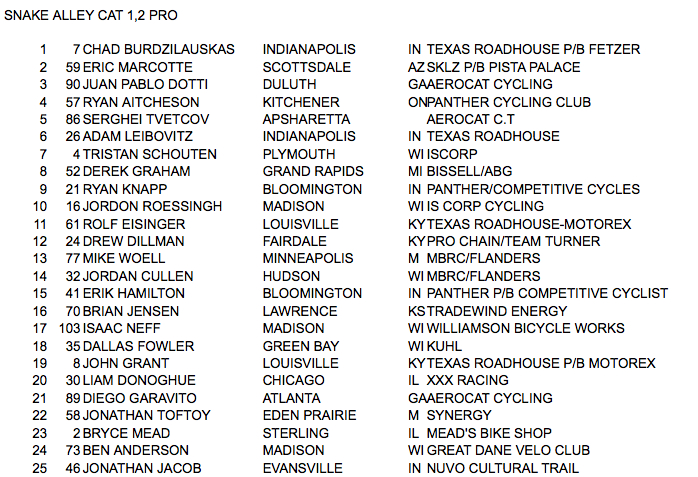