I saw this article a few days ago about Riccardo Riccò and his meeting with Ivano Fanini, team owner of Amore e Vita, a small Italian Pro team. I think it is funnier than hell. I’m not sure why these guys what to publicize stupid shit like this. I think it is a case of the blind leading the blind. Or dumb and dumber.

The guy is making Riccardo an incredible attractive offer. The offer is that I’ll give you a pro contract if you cooperate with the police in the fight against doping. I assume that means he has to tell his story of his botched blood transfusion. And if that is the case, then that would be the end of his ability to race bikes for awhile, like forever. So, in reality, this is nothing. Just two guys that like attention from the media.

My favorite line from the article is- “Riccò could have won the Giro and the Tour like Pantani did, but he ruined his career and made everyone turn against him.” Wow, he could of won the Giro and the Tour like the great, but dead, Pantani. If only he could have followed in Pantani’s footsteps. Maybe if there are more guys like Fanini around, Riccardo will get a 2nd chance to end up like the great Pantani. He almost succeeded February 6th of this year. 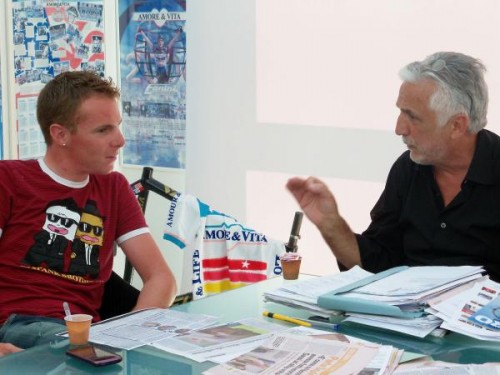 Riccardo and Ivano discussing their plans for the future. Brilliant!