I am beat. Beyond beat. Yesterday was a day to forget for Steve. It started off nice enough. I got up late after watching movies until nearly 3 am Saturday night. It is amazing how untired you are after racing late. And the race Saturday wasn’t even that late. Then I went for an hour bike ride and got some coffee. Then it got worse.

It started raining and didn’t really stop. I’m not for rainy criteriums. I know a lot of riders that know me think I am. I admit, normally, I am very good in the rain. I think I tend to focus more because I realize the conditions merit that. But, I wasn’t really focused yesterday. I hate riding clinchers. I had the right tires, but they are still clinchers. And I hate warming up in the rain. Everyone does, I suppose. Anyway, I didn’t have much adrenalin flowing for the start, which is completely unlike me.

The course was hard. Especially for the conditions. It was a rectangle with a corner cut off so there were 6 corners. Up and down a long, gradual hill. I lined up on the front and got a good start. Everyone was fighting for the front, but doing it pretty friendly. Eventually the field of 80 guys or so got into a single file line. And that was the problem for me. I don’t have the form to do two full out sprints for 30 seconds each lap. I saw the writing on the wall. So, I decided that I was going to ride 30 minutes and stop. I never got any worse from 15 minutes, until 30, and if I really had to, I could have finished the race. But I didn’t want to suffer that much. When you start thinking about the drive home when you’re in the race, you should just stop right then. It is a tell tale sign of not being in the moment. When you start thinking about after the race before the race, you should not even start. The race is what should be on your mind the whole day leading up to it.

I’m not really sure what was going on with me physically. It was cold, maybe in the upper 40’s and raining pretty good. I never got warm. My arms felt as bad as my legs. Like when I was pulling on the bars, I wasn’t getting any power out of them. And my left hamstring had twinges of cramping nearly from the first lap on. Maybe I was just cold, I don’t know. But I know I wasn’t working that well. Obviously, a lot of guys were having issues of their own, because it was amazing how many guys were getting popped each lap and pulling the plug. The field was so small and I didn’t stay to the end. I still haven’t seen the results posted anywhere. Weird.

So, I changed at the car and left. I know I used 1/3 as much gas driving the Insight as I would have driving a van, but it was a hassle. Mainly because of the rain. I didn’t bring Bromont with me because it was going to be wet all weekend and that he didn’t have much room in the Honda. That leads me to the 2nd half of my day.

Kris called me around 6:30pm and said that Bromont had run off on the dog walk at the Natural History Museum and had been gone a couple hours. Most of Bromont’s tags have my cell number on them, so he wondered if anyone had called. I told him obviously not, or I would have called him. I told him to call when he came back. A couple hours later, when I hadn’t heard from him, I called him back and he told me that he was still gone. I told him to call Bill and have he come out to help. So, I started driving real fast back. I figured it was worth the potential ticket to get home quicker.

I got back to Topeka a little after 9pm. I went home and got my MTB and diesel van and drove over there. The Natural History Museum is on the West side of Topeka, next to the river and the Governor’s Mansion. But, there is an Interstate highway on the South side. I met up with Bill and Kris and told them I was going to ride the shoulders of the highway first. The security guy from the museum wasn’t too thrilled about the commotion in his parking lot. I explained that I was going to leave my van there with the door open all night and check on it periodically. He seemed okay with it eventually.

I got on my MTB and rode over to the fence and climbed it to get access to the Interstate. I rode both sides of the highway for a 3 mile section, but it was really hard to see much unless cars were driving by. I was pretty relieved not to find him over there. He’d been gone nearly 6 hours now. At 10 pm., Keith and Catherine had volunteered to go over to the Governor’s Mansion with their dogs and walk. So that was covered.

I didn’t really know what else to do. The woods behind this place are dense and it would be valueless to try to ride in there and look. I went home, drank 5 shots of espresso and got a couple sleeping bags and my other van. I thought I’d drive the highway, on the shoulder, and then ride my MTB along the railroad tracks along the river. After that I was going to go back to the van I left in the parking lot and sleep there until sunrise.

Keith, Catherine and Bill went home. Kris called and said he was riding along the tracks, so I drove along the highway. About 12:30, I went back to the parked van to drop off my sleeping bags and get my MTB bike and the door was shut. I thought the security guy must have shut it. When I went up to open it, Bromont was inside. He was beat, but extremely happy to see me. I guess the security guard must have seen him in the parking lot or by the van and shut him in.

I was/am so relieved. He was gone 8 + hours. I know I’ll never figure out where he was, but that is the longest he’d be on walkabout by 6 hours or so. I guess it’s time to get a Garmin GPS for him. I would have paid $10000 to have one on him last night. The stress was pretty unbearable.

I think it is strange how things become significant or are significant. The only way that I was staying somewhat calm was trying to convince myself that in the grand scheme of things, this was nothing. A lost dog on the planet. Compared to all the other tragic stuff happening everywhere, it is nothing. Nil. But, that barely worked. It was/is super important to me. I can’t do anything about it. Or do I want to. I would have spent the next month looking for him. Longer probably. That’s the way it is. I accepted that when I got him. Lucky for me that he is much better at finding me than I am at finding him. I

So, I went to sleep around 3 am again. The coffee didn’t seem to have much effect on my complete exhaustion. Today is going to be a total write off. I have a car full of soaked cycling clothing, a bike that needs attention and, thankfully, a dog that needs to be washed. Not enough hours in the day, or enough days in the week. 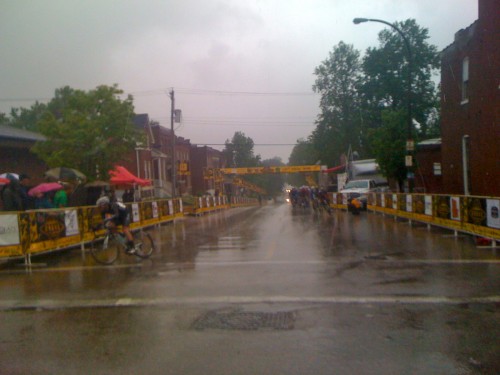 The Pure Black guys from New Zealand were active all day. 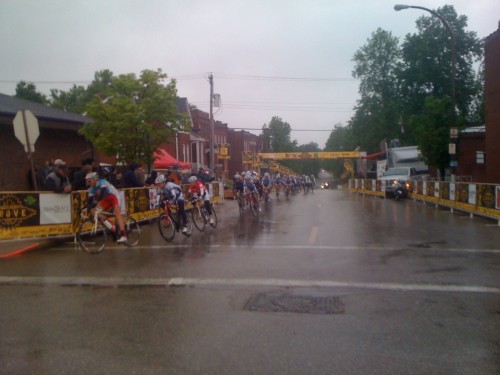 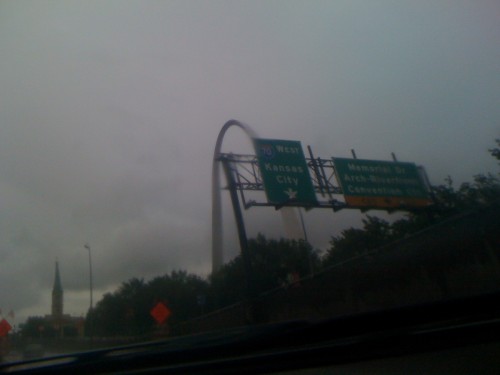 The St. Louis Arch through my windshield. 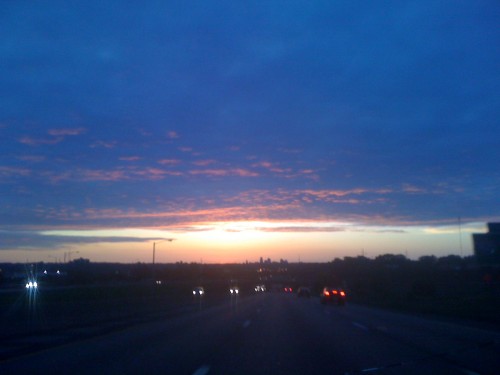 The sunset driving into KC was great. 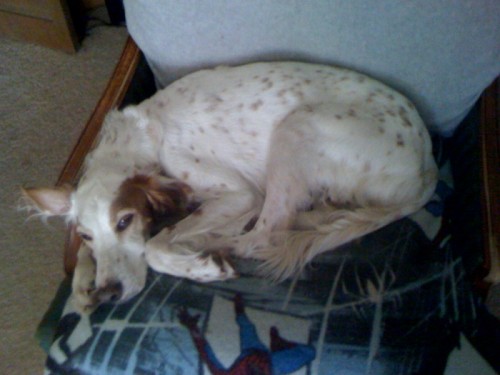 Bromont, exhausted, in his chair this morning. He gets pink when he is tired. Normally that is only when he goes to bed. Today he woke up pink. Me too.