The Tour de Grove yesterday went pretty much exactly like I’d figured it would. I knew when I was driving to the race, in the rain, that I would be racing in the rain. It wasn’t exactly raining the whole time, but it was wet. Wet enough that the field was timid. Beyond timid. Which was fine for me. The course was long, maybe 2.5 km. Pretty much a L, with a squiggle in the middle. The only corner that was dangerous at all the the final 2. The final 2 corners were really just one. Kind of a U-turn. That doesn’t mean that there weren’t guys falling all over the course.

I think half the reason that riders fall in the rain is because they have no idea if they are riding tires that work. It seemed like a lot of the guys were riding their training wheels. With their training tires Clinchers, aluminum rims. I did. But, I put on Michelin Grip clinchers on specifically for the wet. I never felt either wheel slip once. My preferred setup is Vittoria CX tubulars, but I didn’t want to ride my new Shimano carbon wheels in a race that I most likely wasn’t going to be able to win.

Mike Weiss and the guys from Bigshark Bicycle Company did an awesome job of putting this even on. Being a promoter at an even like this takes a ton of energy. Then throw in the adverse conditions, it doubles the workload.

Anyway, the race split up about 1/4 way into the 75 minute race. 5 guys rode away, then 4 more bridged up to them. It was the exact right combination. All but Colivita, I think. I was right behind Jonathan Cantwell, Fly V, when he rolled up to the break, but never considered going with him. After the break was established, there wasn’t enough power left to organize any kind of chase. Still, the break hovered less than 20 seconds for the next 30 minutes. A couple times it got down to under 10 seconds and I was pretty sure I could make it up to them, but didn’t really feel like it. I wasn’t going very good and didn’t want to completely destroy myself, which I nearly did anyway.

The course itself had pretty horrible pavement. Lots of deep manhole covers, steel plates and lots of cracks and potholes. A ton of guys flatted. Or crashed. There were two pits and each lap at least 3 or 4 guys were coming out of each pit. I talked to a guy that said he flatted 4 times. That beats my record in a criterium by 2. I hope, for his sake, that he was flatting the SRAM neutral support wheels. I hit a pot hole with 3 laps to go that nearly threw me off my bike. The 3 guys in front of me hit the same hole and all three of them flatted. My bars moved in the stem and the brake levers went down an inch. I couldn’t pull them back up, so just opened my brakes and made due the final two laps.

So, the break won. I think we were sprinting for 11th. I’m not sure why, but it never ceases to amaze me that when the race gets going hard at the end, it is always much easier for me. Maybe I’m just more focused. I don’t really know. But, the last two laps I was probably as good as I was anytime during the race. I got into the long backstretch in good position. I only made one mistake, which probably cost me 3 or 4 places. I should have went around the outside through the last corner. I would have come out of it in the lead. Instead, I dove the inside and got shut down some and ended up coming out of it, maybe, 6th. A couple guys passed me in the 300 meter, headwind sprint. My acceleration is nearly nonexistent right now. I jumped more yesterday than I have the whole season. It was the 2nd criterium I’ve done this year, which is pitiful. Here’s a link to the Cyclingnews.com report on the race.

So I ended up 18th. $215. I don’t really have an opinion of that place. It wouldn’t really matter anywhere between 5th and 20th. I need a lot more racing to get up to speed. Tomorrow’s race isn’t until 4pm. It going to be a late night driving back.

I’m not sure what they are going to do in California today. Here’s a link to a webcam at Lake Tahoe. Pretty ugly. 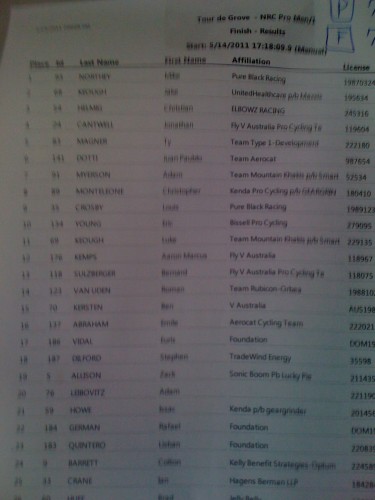 Here's a pretty shitty photo of the results. Double click to enlarge. 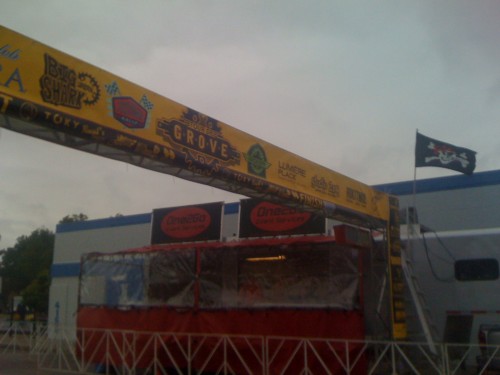 The finish banner was cool. 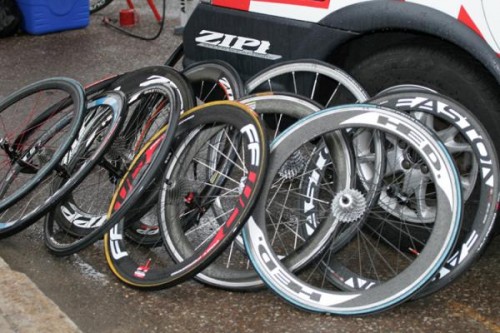 Tons of flats. This was probably only from one lap. 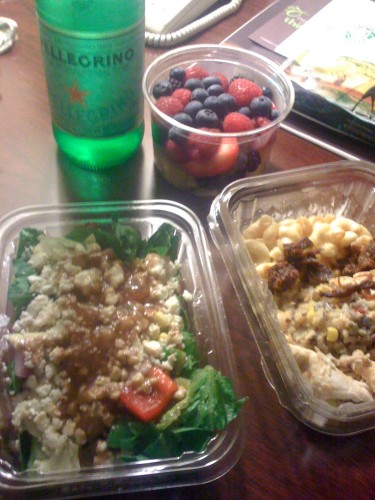 Brian Jensen gave me a book on eating differently, I guess more healthy, so I went to Whole Foods for dinner. But, it was nearly 10pm before I got any food. 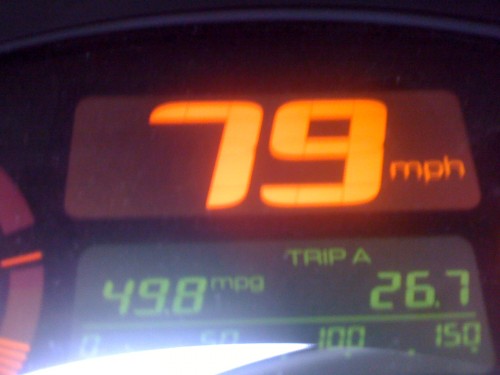 I drove my Honda Insight to the race since I was traveling solo. It gets better gas mileage in town, but averaging nearly 50 mpg on the highway is awesome.