1st crash of the year. I didn’t really see it coming and it probably cost me some skin and equipment. It is funny because even though crashes come suddenly, usually when you least expect it, somehow time seems to slow down and a lot of times you end up doing exceptional things because of this time shift. But, no time shift here. It was full speed, in real time, actually and mentally.

Other than that, the Old Capitol Criterium went pretty good. I made a couple mistakes that I normally wouldn’t have. One thing that is super important in this sport is that you have to ride to your fitness level. It is very easy getting caught up in the action and getting over your head because of it. I’m normally pretty good at monitoring my ability and feelings, and using the appropriate amount of energy. I got over my head a few times early for no reason at all. That is just stupid bike racing.

The criterium is on a 1.3 km course with a 100 meter hill on it. It is mildly technical. A very good course. It was super windy/gusty. Positioning is pretty important on this course. It gets strung out single file at quite a few places each lap, so it is nearly impossible to participate in the moves if you don’t stay near the front.

The race stayed together most of the race. Brian and I were both off the front a few times early. The field was attentive. Finally with 15 laps to go, Brian got away with Zach Reed, who was with us Saturday in the road race. Brian was doing the majority of the work. They got about 20 seconds ahead. Dale Sedgewick, Grand Performance, from MSP, came to the front with Adam Bergman, Texas Roadhouse. I got on Adam as Dale did a full lap in chase. At the bottom of the hill is when I made a costly mistake.

I took my eye off the ball for just a blink. Adam jumped when I wasn’t quite ready and got a pretty good gap on me going up the hill. I jumped, but missed it by a fraction. When Adam got to the top, he accelerated and put 10 bike lengths on me. I ended up having to chase him 3/4 a lap and was hurt. The next lap up the climb, he dropped me again and I had to chase back. He was catching Brian and Zach fast. I got back on Adam for the descent and got to sit for a couple hundred meters. Brian hadn’t been going full out and when Adam got on at the base of the climb, he attacked. That shelled me. I yelled to Brian and he sat up. I got on, but was way over my head. We rode a pretty slow lap. I tried to take a pull, but it was pitiful. The next time up the hill, Adam attacked and Zach and I got spit out the back.

We tried to work, but both of us were pretty done. Me more than Zach. I never should have let Adam get that gap on me. If I would have been on him initially, the results would have been very much different. I wasn’t riding that bad. I wasn’t going good, but I wasn’t horrible. Actually, towards the end of the race I was going okay.

Zach and I got caught with maybe 8 laps to go. Bill was at the front trying to slow the field. I slotted in a few guys back and recovered pretty quickly. It wasn’t a done deal until 3 laps to go. At that point they had over 15 seconds and there wasn’t anyone left that could bring that back. I told Bill to quit jumping on moves and to rest up for the sprint.

I know the last lap well. You have to be at the front climbing the hill because there are 4 corners in the last 500 meters. I was climbing the hill behind Pat Lemieux, Kenda, when Ryan Nenninger, Mercy/Specialized came charging by on the right. I got on him pretty easily and knew no one else was going to be able to get on easily. The sprint was over. Ryan was going to go hard all the way to the line.

The problem is that Ryan never made it past the first corner he came to. He was way far on the inside of the corner, but the road was wide and was negotiable. I didn’t expect him to fall since it wasn’t a tricky corner. I was turning at a different angle than Ryan, on his outside. The reason I got so jacked up from the fall was because I thought I could make it around the outside as he was sliding, so didn’t pull my brakes until my front wheel was hitting his back. I flipped over at a pretty good clip and slid into the outside curb. No one else fell because the corner was so wide and we had a pretty good lead going into it.

My steering column snap off at the top of the headset, so my fork fell off and my headset bearings were laying on the street. That was pretty depressing.

Brian, in the meantime, knew he didn’t want to be with Adam at the finish. We’d talked about it before the race. But, he’d won both races the day before and was going to win the overall by finishing 2nd, so he rode to the finish. But Adam won the sprint. Brian ended up 2nd and Bill finished 3rd in the field sprint, so 5th on the day.

The results were good. Winning 2 of 3 races and the overall was great. With only 3 riders at a race, with the whole field keying off of them, the racing is hard to control. We had a great situation when I bridged up to to the Brian with Adam, but I didn’t have it when I needed it. It was the first real criterium I’ve raced this year, but I should be better than this at the start of May.

Catherine Walberg won the women’s race again, so that was 2 out of 2 for her for the weekend. She rode away from the field on hill, which is a nice way to win.

I didn’t sleep much last night, hardly any at all. I didn’t lose that much skin, but my left collarboneg/shoulder area is not that great. I’ll give it a couple days and then decide about starting Joe Martin NRC on Thursday. 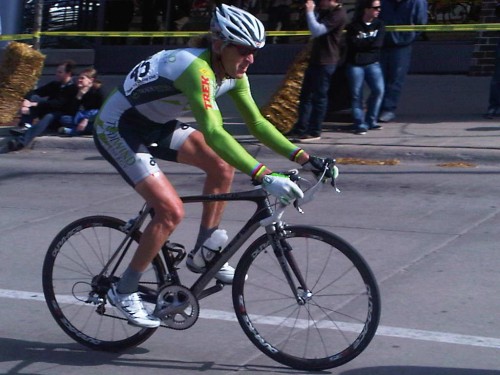 This is the last photo of this long sleeve skinsuit. It isn't happy now. 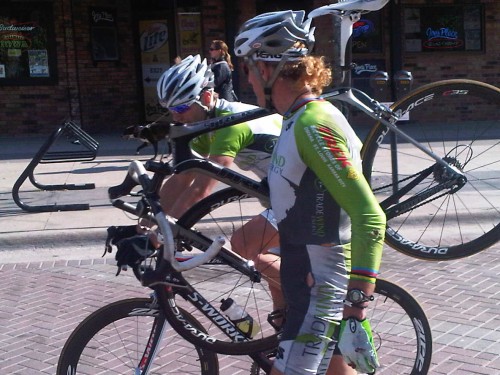 Walking back to the van talking over the race with Brian. 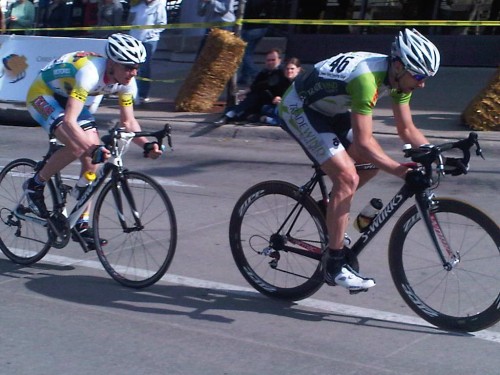 The winning break. The two best riders of the day. 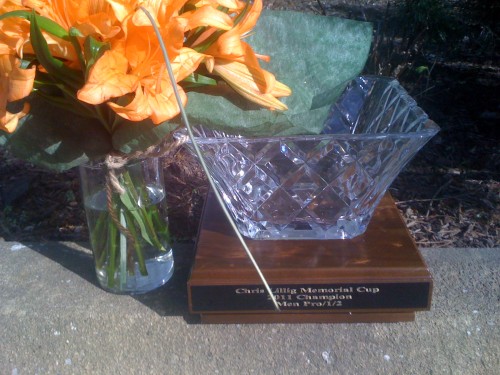 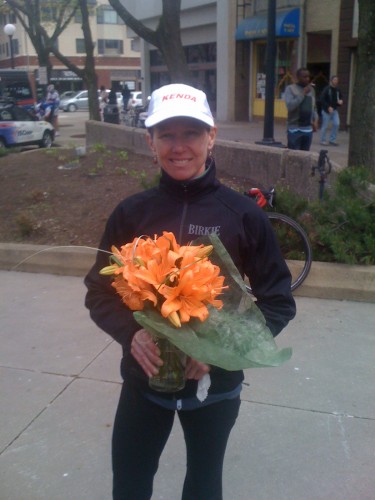 Catherine with her winning flowers on May Day. 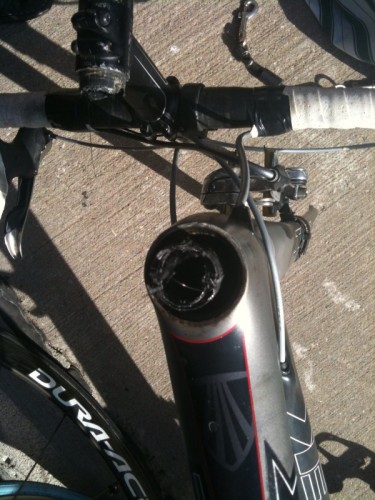 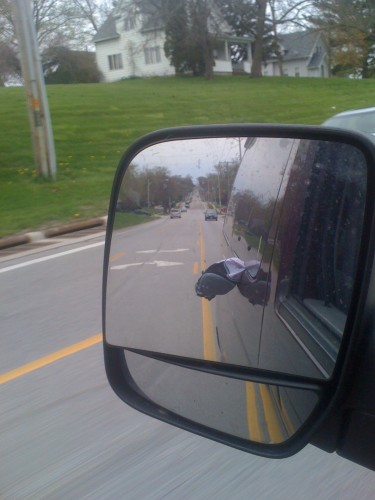 A photo of Nick trying to dry his shorts on the drive to Iowa City. 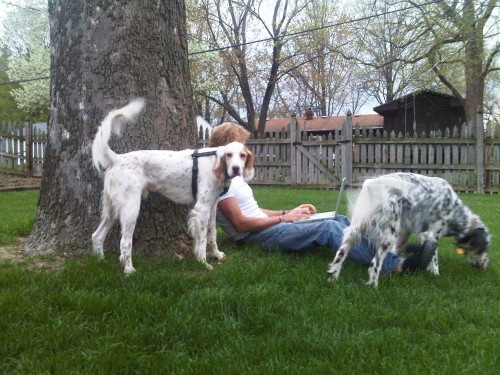 Stealing internet in Jeff's backyard with Bromont and Hawkeye.