I normally train pretty hard I think. I don’t use a power meter or do interval/sprints or a structured workout, but I generally ride pretty hard. I’m in the wind a lot and don’t just ride around. But, I’m going to be just riding for a while now. Until I feel different. I’m not sick or hurt. Just in a funk. I feel it walking/sleeping/not sleeping, etc. So, yesterday in California I just rode around for a few hours, a couple times. I’m flying back to Kansas tomorrow. I have a ton of projects to do there. I guess I’ll get a jump on those, because I’m not racing around until I’m riding better. It’s too frustrating. 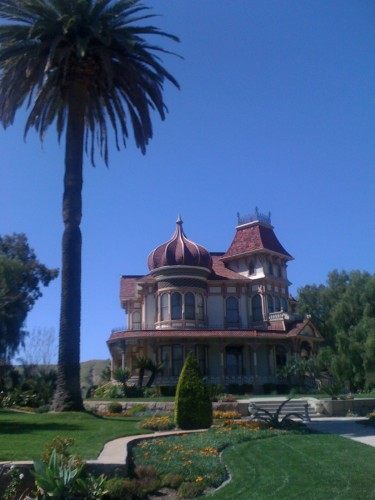 Historic house in Redlands climbing up to the Sunset Loop. 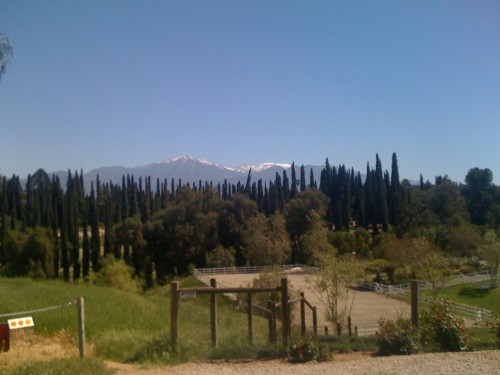 Looking down toward Redlands from up on Sunset. It is amazing how rural it is in places. 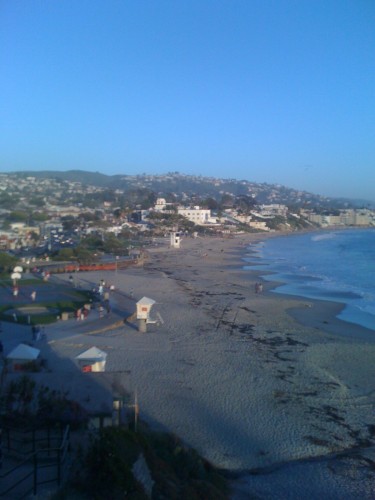 Views down on the coast in Laguna. 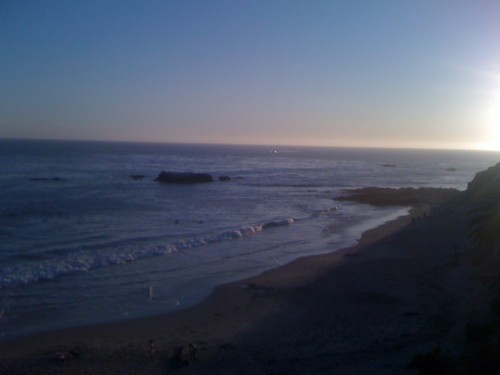 Someone sent me a link to the tweet below from Lawson Craddock. It got me thinking about racing now and 30 years ago and if there was a way to race myself of old, who would win. And I came to the conclusion that I’m better now than I was then.

I’m not sure I’m physically better. Probably not. I’m fairly beat up. But, considering the whole package, I’m a better bike rider. Experience in this sport is key. Learning from observation. Learning from mistakes. Learning in general. And retaining that information. Then applying that knowledge to different circumstances later, to have a better result. That is one thing that attracts me so much to the sport.

I still find the mental aspect of the sport interesting. After riding Redlands, I’m thinking about just using stage races later on in the season as training. I find the racing pretty boring. Free for all bike racing is much more interesting to me.

Like the end of Tour of Flanders last Sunday. I’m still thinking about that last 15 kms. I don’t understand it. Boonen launching Cancellara off the front. Then, Cancellara loosing a 45 second lead on one hill only to split the field right when the field reconnected. And Sylvain Chavanel pulling during the last 2 km, when he has Tom Boonen so close behind. There was a kind of weird hand shake between Chavanel and Cancellara in there somewhere that I didn’t quite understand. Pretty great bike race in general.

Anyway, I don’t remember racing against Lawson’s dad. But he must be a pretty good athlete because his son obviously has pretty good genes.

I heard a story on NPR a few months back about some spiders that were taken up to the International Space Station and proceeded to spin their webs in outer space. I had been meaning to check it out more, in depth, and I did on the way back to Kansas yesterday. It is truly amazing.

Spiders use gravity when they are spinning web on Earth. But, since there isn’t any gravity in space, the spiders had to adapt and “figure” it out. This experiment had been done back in the 70’s with the same results. I never really thought much about a spiders ability to overcome a huge change of environment, in just one day, and be able to go about its business of collecting food. Obviously spiders have a thought process, and that is way beyond anything I’d imagined.

It goes to show you how important adaptation is to survival. In the sport of bicycle racing, that couldn’t be more true. It is an ever changing environment, especially if you’re so lucky to be mixing it up with road, MTB and cyclo-x. I think the key to success in this sport is to be able to adapt quickly, quickly enough that it becomes 2nd nature. Good, quick decisions serve you well in cycling. Getting to the point of making them is the problem. It takes a ton of experience and time. 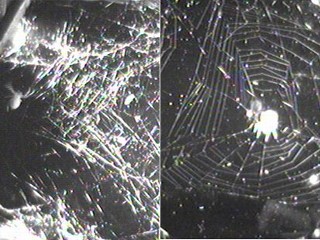 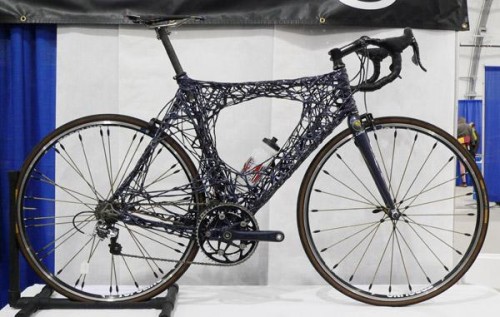 Yesterday night I went down to Lawrence to meet up with my TradeWind Energy guys to eat dinner and talk. It was pretty fun. Anyway, I was leaving around 11 and got pulled over twice in 30 minutes.

The first time was for backing up over a yellow center line. I was pulling out of a parking space and I backed over the center line. The Lawrence police officer ran a red light to pull me over on the bridge over the Kansas River. I had no idea what I did wrong. He gave me a ticket for improper backing. $133. I told him that was ridiculous, that some people had to work half a week to make that much money. He told me it was the least expensive ticket in the City of Lawrence. Shit.

Then 20 miles later, I was driving on the turnpike, 3 lanes, and I got pulled over for driving in the left lane for too long a period and going 79 in a 70. In Kansas, it isn’t a moving violation unless you’re going 10mph over the speed limit, so I wasn’t so concerned. But, I thought I was going to get another $250 worth of tickets. This guy was nice and just gave me a written warning.

Anyway, I’ve gotten pulled over and ticketed 3 times in the past year. Granted, I drive a ton. But, the tickets that I’ve been given are for stupid things. I don’t speed in the city. Off the highway, when I’m driving on interstates, I usually just drive 9 over the speed limit.

I think that it’s just a way for the cities to generate revenue. And it is a bullshit way for this to occur. Police have enough issues to deal with than to have to go out and do this stupid stuff. I guarantee that they hate it more than I do.

This kind of relates to the reason a couple months ago that I called the USAC to “complain” about the $250 surcharge that they are charging to score domestic elite teams in the NRC. It’s just another way to race some revenue from the guys that are already spending a ton of money with them. Most elite riders pay $150 for an International license. Then they are paying god know what every week to race. Now their teams have to pay $250 to be scored at a NRC race. The entry for a men’s team in Redlands was $1100. That is pretty high already. And the results are computerized. What is the USAC doing extra to post the results? Hardly anything.

Now there are surcharges for fuel prices for planes, surcharges for insurance at sporting events, surcharges for backing up over yellow lines? Not to mention the bullshit baggage surcharges that are keeping airlines in the black. I’m so sick of it. But, I think that that this is all here to stay, so I’d just as well better get used to it. 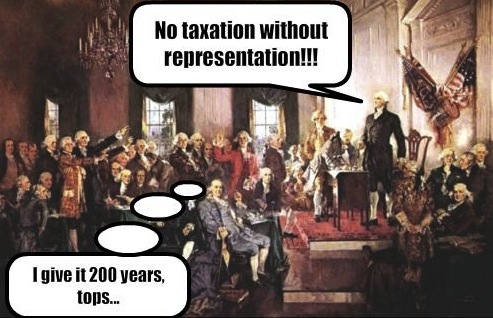 Here are a couple videos to get ready for tomorrows race. The first one is a short video of the 1990 finish between Steve Bauer and Eddy Planckaert. Trudi was at this finish with Steve. The next is long-A Sunday in Hell. I hope that Bjørn Selander has better luck this year than last. It is so cool he is racing Paris-Roubaix again so young. I bet his dad, Dag, is going more nuts than he is normally. 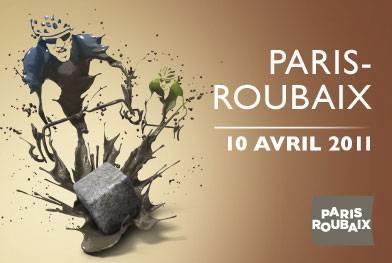 The 1990 finish of Paris-Roubaix was the closest in history. Steve Bauer was 2nd by less than nothin’. Plankckaert had a better bike throw. Steve’s 2nd place finishes are career dreams for most Pros. Trudi was working for 7-11 then, so I have some photos from the race. Click twice on any of the photos to enlarge. (Or three if you want it really big.)

There are tons of links to the race tomorrow morning. If you have trouble, you can always go to Belgium TV (click here) and start watching at a stupid early hour. SteephillTV has a ton of links too. Plus there is always Cyclingfans.com too. Should be fun. 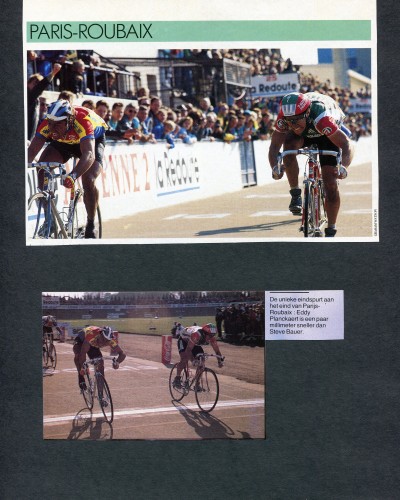 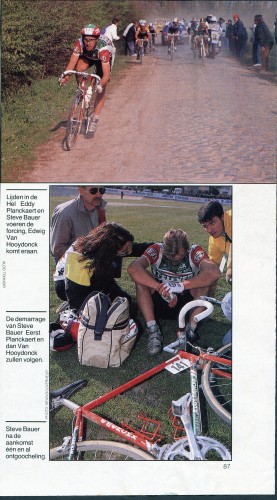 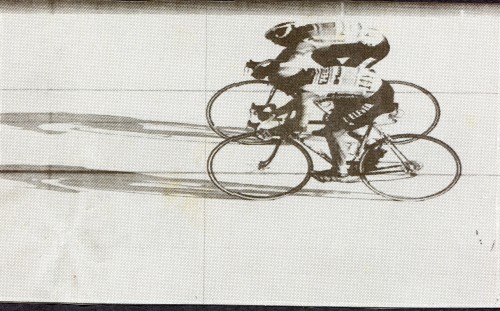 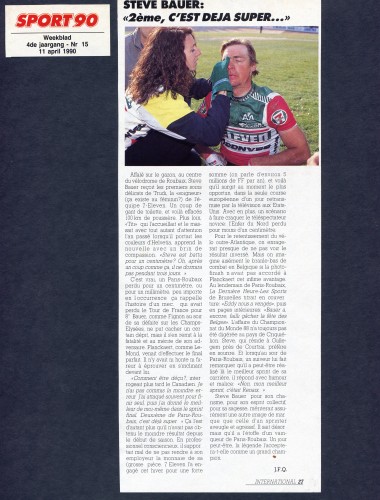 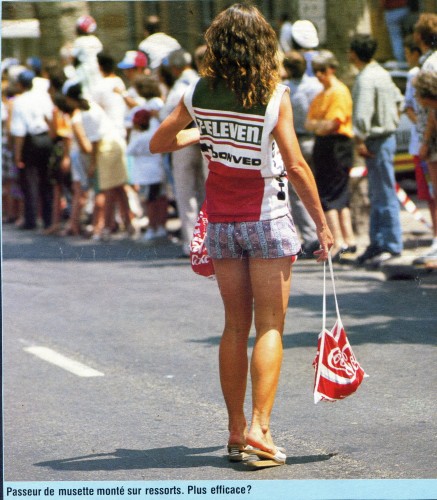 Here are some pictures that Trudi just sent over from PR a few minutes ago. Pretty great race. 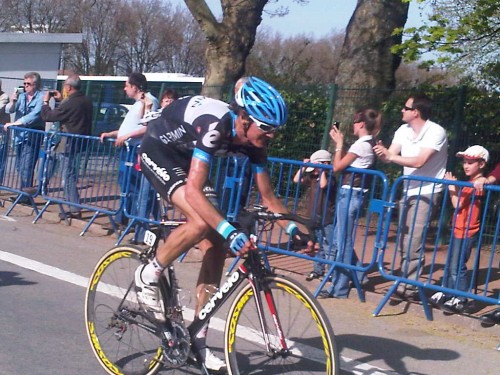 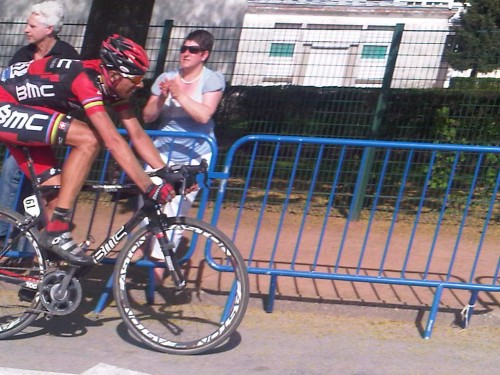 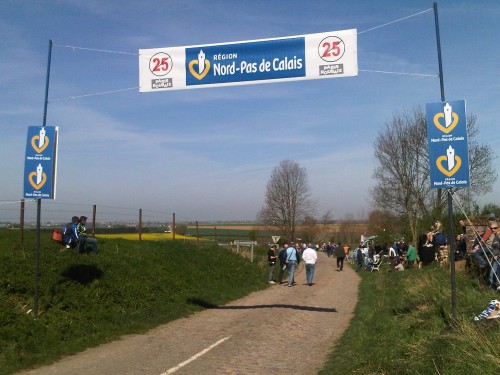 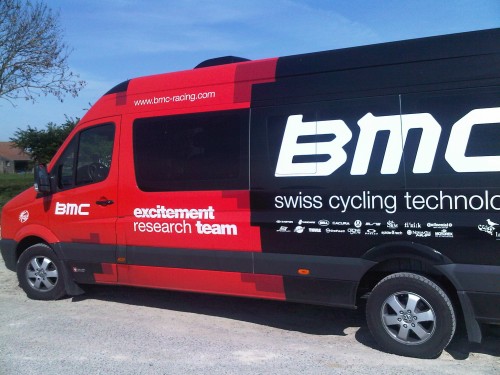 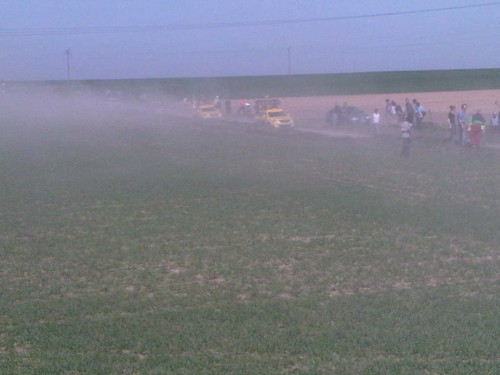 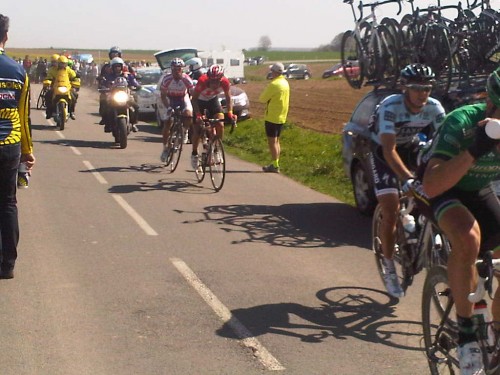 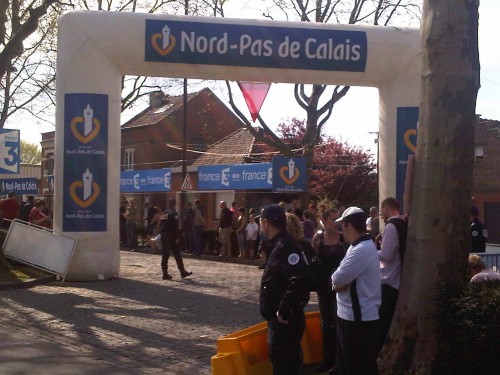 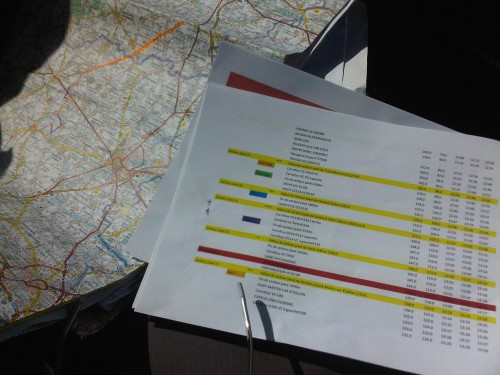 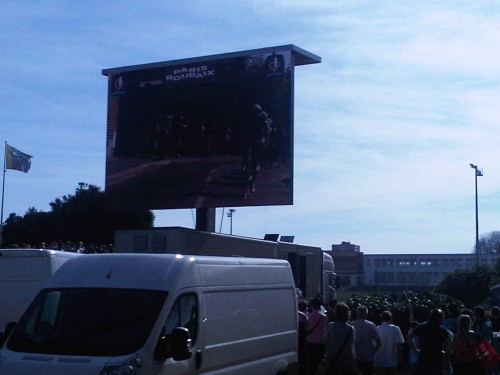