Yesterday I went by that house where my 3 cars went “missing”. Jeff, Desert Storm Vet, that had been “renting” had moved out about 3/4 of his stuff, but there is a ton of it still there. My experience is if you change the locks when someones stuff is inside, you have broken windows down the road. Anyway, it has been a couple months, so I figured that he probably has taken all wants.

So, I drive up to the house and there are a bunch of people on the porch. A tall white guy, a Hispanic woman, a couple small kids and a City of Topeka guy. I drive around the block and park. The City guy is gone, but everyone else is on the porch. I walk up, introduce myself, and ask if I can help them. They say, “no, we’re renting this house.” I tell them I own the property and that it’s not for rent. They tell me that they are renting it from Jeff. I immediately ask them if they gave him money and they say yes. I inform them that they probably “lost” that money. They said that they had already turned the water on and that they were supposed to move in today. I said I have not had any good experiences with the house and I’m not renting it anymore.

So, I leave and go home. Then I start thinking that a couple months ago, I’d drained all the water and left all the faucets on. So, I need to go back and decided it is also good time to change the locks. I gather up my stuff and drive back over there only to be surprised that their car is still parked in front. The woman is walking up the sidewalk as I park. I follow her up the walk and watch her go into the house. I didn’t think they had an ability to get inside. She sees me and slams the door. I go up and knock. No one answers, so I walk in. The woman asks if she can help me? I think I just stare, not quite understanding what she means.

The guy is on the phone in another room. I listen and he’s ordering cable TV. Then he walks to the room I’m in and asks if he can “help” me. I’m stymied. Then he says, “Steve, right?” I’m thinking, “Shit, am I in the Twilight Zone?” I say something back like, “Yeh, Steve, the same Steve that was here 45 minutes ago and said that the house wasn’t for rent.” Then he starts questioning me about my “relationship” with the house. I explain, once again, that I own the property and that I’m not renting it.

Now there are two Hispanic women here and 4 children, plus the guy. The women start talking in Spanish. It sounds kind of mean. The guy is being a little aggressive and no one is acting like they are leaving. I talk a couple more minutes and it is obvious that they don’t plan on leaving. I finally just say something like, “I can prove I own the house, so maybe the best thing is if I just call the police and they can sort it out.” The women encourage me to call the police, but the guy says something like that won’t be necessary.

I tell them to go a find Jeff and try to get their money back. And to have Jeff call me. Yeh, right. As they are leaving, I’m trying to be cordial. I really didn’t want them pissed off at me and later on down the road, one Friday night, and decide to throw a Malotov cocktail at the house. The guy asks me if he can go in and get their stuff. I say of course. He goes in and brings out a baby crib and a bunch of other stuff.

They leave. Kind of pissed. It is amazing that after talking to them earlier, they were still moving in. Obviously, they didn’t have anywhere to live. But, I had no idea, and still don’t, know what they were thinking. Maybe they’ve done it before. Just move into a place and make the people kick them out. I can’t believe how “lucky” I was going by there in the first place. A few hours later there would have been at least 3 adults and 4 children living there.

So, I go back into the house and realize that the front door lock has been removed. So, Jeff must of went over and used his key and then just taken the lock off so they could get in. I’m not sure why he just didn’t leave the door unlocked.

I guess I’m just going to fix the house up some and try to sell it. It is not in a good neighborhood. And it is not rentable. By that I mean that anyone that is going to pay rent, won’t live there, and the people that would live there won’t ever pay rent. It’s too bad, because it is a very nice house. 100 years old. Hardwood floors. Nice. Or it was nice. It’s kind of beaten up right now, but it could be worse. I’m lucky there aren’t dozens of people living there at this very minute. 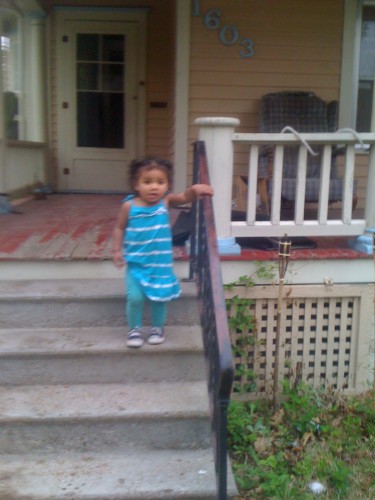 Last one out. She was very cute.

11 thoughts on ““Rental House” update – It keeps getting Weirder”