I’ve been asking friends what control they have of their everyday life. By that I mean how much control to you have of where you are and what you’re doing at any specific moment. Most people answer with a big number. Something over 50%. My number is .0001%. Maybe nothing would be closer.

It is kind of hard to explain the reasoning behind my belief that I feel like a feather in the wind. But, I’ve give a couple examples.

I do think that we make billions of micro decisions on a constant basis that we think leads us on our life path. But, we have little choice in what decisions we get to choose between.

I’ll use riding for the Schwinn Team as an example. At the end of 1986, the Levi’s Team was over. I didn’t have a sponsor. There were really only 3 Pro Teams in the United States really. That left 7-11 and Schwinn. Sometime early in 1987, Mike Farrell, the director for the Schwinn Team tried to get ahold of me in Topeka, before the Tour of Texas. I knew what he wanted and didn’t have any desire to ride.

The reason for that was that Mark Whitehead rode for Schwinn. And we didn’t get along. It’s not like we didn’t get along, it is more like there was no way that I could ride on a team or be a team mate with him. There were thousands of reasons for this, but mainly it was that he was an asshole and there is no way I could defend the way he raced a bike. Or lived life for that matter. (I guess Mark is racing again and doing some good things in the sport now. Here is a long interview with him recently by Bob Babbit. He does have a lot of nice things to say about Greg LeMond. And about the fights after the races he participated in. )

Anyway, Danny Van Haute, longtime Schwinn rider and now director of the Jelly Belly Team, told me I needed to give Mike a call. Then Broz came over a couple days later and said I needed to call. I explained my Whitehead problem to Tom and he said he understood my problem.

So, I raced the Tour of Texas on my own. Then, the situation changed. Mark Whitehead did his normal after race craziness and ended up doing donuts in the Schwinn van on one of the main sponsors front yard. So, he had finally went too far and got booted off the Team. Mike called me the next day and was mildly pissed I hadn’t called him back. I told him I had no interest in riding for him. He told me he had talked to Danny and Tom and then he told me that he’d kicked Mark off the team a few days earlier. That changed the situation completely. I met up with Mike the next day and signed a two year contract.

So, for the next three years, I rode for Schwinn, Wheaties/Schwinn. All because Mark Whitehead pulled some stupid shit after a race. I made the final decision, but I never would have been giving the opportunity to make that decision without given the option of riding sans Whitehead. So, all the seconds of those three years were actually decided by an action of Mark Whitehead over anything I did myself. So, I guess I owe Mark. I’ll buy him a beer next time I see him. 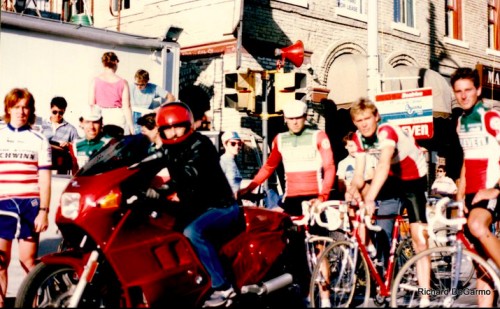 An old Tour of Texas photo. Mark on the left.