I was watching the finish to Vuelta a Castilla y Leon today and have nearly come to the conclusion that this leadout thing doesn’t really work. Sky was controlling the field very well for the last 4 or 5 km. But, with less than a km to go, it went south for them. I think their guy ended up 3rd.

The leadout might keep your guy out of the direct wind and a little safer leading up to the sprint. I’m not positive about that either. But, when it comes down to the finish, I think that it is a toss up whether sacrificing you whole team for one guy really works. Remember a couple years ago when Cavendish was winning at ToC. He was freelancing the whole time and was killing it. I think you, as a sprinter, have a much higher chance with maybe only one other team mate involved.

I’d be interested if there were statistics on the winners of races in field sprints and the chance that a winner actually came from the team that controlled the race during the finale. I think it would be a losing proposition.

In the US, it hardly ever works, especially in criteriums. My observation is that the “Pro” riders use so much energy just trying to stay on and protect the wheel of their team mates, that they are toast by the time they have to go fast at the end. I watched both the criterium and Sunset Loop at Redlands end without an organized winner. Fly V had it lined up the last stage, but Cole House outsmarted them with two corners to go.

I do realize that the overall safety of the race is increased dramatically by the speed being super high at the end. But, if I was running a team, I’m pretty sure I’d never put all my eggs in one basket and play the leadout game.

I guess these team directors have to do something to earn their $$$$. Why not make the riders work, even if it is for naught. 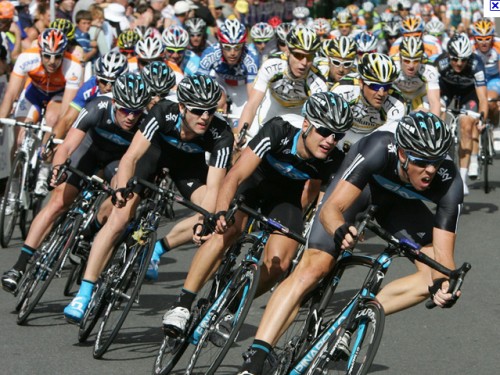 18 thoughts on “Leadouts-Do they really work?”