Here is an article on Riccardo Ricco, describing what he’ll be doing this Friday. And here is an excerpt from the article –

“I haven’t seen the police documents but I’ve got my medical records and there’s nothing written on them. It’s all been made up,” he continued. “He [the doctor] says one thing and I say another. But I was almost dead and don’t know what I could have said. Let’s see what the [blood] analysis says. I didn’t say absolutely anything to the doctor.”

This quote proves how good drugs must be to enable a guy as stupid as this to win so many races. Dumb guys don’t win bike races. At least on a constant basis. This guy did. He contradicts himself in just 3 sentences. I “don’t know what I could of said.” Then, “I didn’t say absolutely anything to the doctor.”

I’m not sure why he is even showing up at this hearing if he’s not racing ever again. I thought he wanted to be done with this silly sport and be a barista.

Maybe he was just misquoted and I’m all wrong on this. 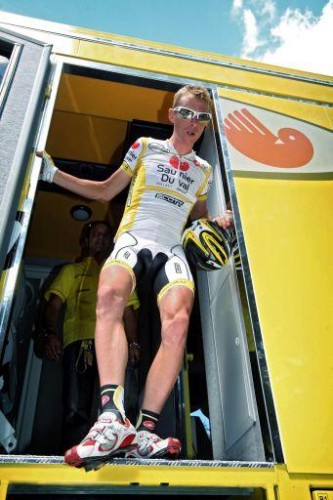 “Stay back, I swear I’ll jump.” or “Can I interest you in a nice cappuccino?”

8 thoughts on “Ricco – An example of how good drugs must be.”