I woke up in the middle of the night and for some reason decided to take a Benadryl tablet. I’ve been having bad allergies and someone said they take them at night and it helps them sleep. Really sleep was what they should have said. It after 12 and I’m kind of wandering around in a daze. The somewhere between mode. Not asleep, but definitely not awake.

I’m trying to get my shit together to go out to California for Redlands next week. The problem is that all the stuff I’m doing isn’t getting me any closer to leaving. Alexi isn’t sounding so upbeat about his form right now. The 2nd line of his blog entry today is – Irritated as hell all morning, that is one of the edges of a depressive battle. That doesn’t sound like he’s enjoying his endeavor right now. I’m not too upbeat about form either, but Redlands is just a ride around race. The results are from the TT and I’m going to get crushed there, so I’m just looking at it as a way to get some good quality miles. Fridays 120 mile RR should be an effort. I haven’t ridden that far since Battenkill last April. I’ll be alright though.

I was talking to my friend Vincent, who is doing some computer consulting in St. George Utah. He has to go there from Denver once a month for three days to do stuff. Anyway, Vincent and I think, most of the time, along the same lines. He drove to St. George the first time and now seems to be flying to Las Vegas and driving the 100 miles. Anyway, Vincent was kind of griping about the work. He was saying that he has a list of things he needs to get done and he wants to finish that list. But, the problem is that now, everytime he goes there, the list keeps getting longer and there is more to be done. Like he could stay there for a few more days and still not get it done. I told him that was pretty much how employment works for the normal person. You get a job and there is an ongoing list to be completed. You have no job if the list doesn’t get longer. He told me he had no interest in that. I agree.

I’m going to be going to La Jolla for a few days before Redlands and stay with my friends Don and Sue. I was looking for a picture of the Milk Race car crash a couple weeks ago and came upon a photo the Levis Team took for the Coor’s Classic. It is kind of fun.

Okay. I should try to get something done. It was over 80 degrees twice this past week and now it is in the 30’s. Spring. You have to hate it sometimes. 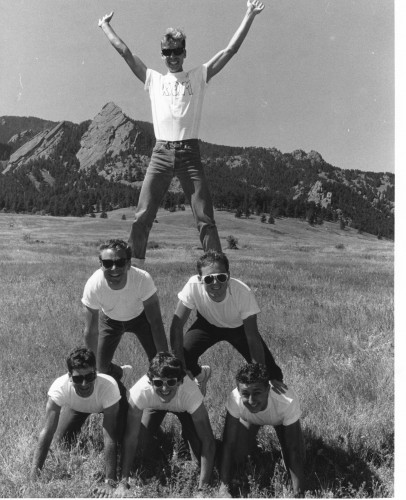 Don, me, and Roy on bottom. Dough and Thurlow with Andy on top. 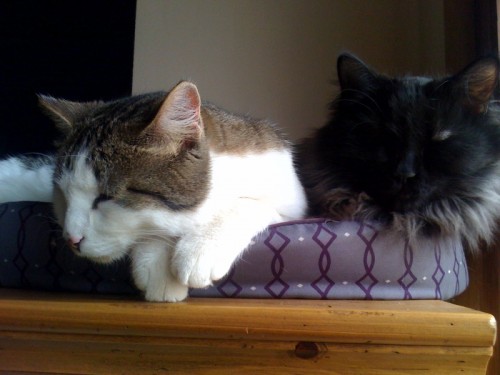 I wish I could just shrink down and curl up with these guys for the afternoon and be real nonproductive.

2 thoughts on “Talk about being Nonproductive”