The UCI and the Pro riders have a stand off on the race radio thing. I’m not sure where USAC stands in all of this. Pat McQuaid sent this open letter to the Professional riders. Some of it makes sense to me.

But, an interview with Jonathan Vaughters, who is the representative of the professional teams group, has a lot to say on the subject. The Pro teams are planning a boycott of a UCI promoted event in China at the end of the season if the radio ban stays in effect past May 1st I think.

Jonathan is a pretty smart guy and someone I’d like to have on my side in an argument. I think he is very, very good for the sport. But implying that the radios assure that the best rider wins a race is ludicrous. Here’s part of his interview from Velonews.

VN: Why are race radios essential in your opinion?

JV: I can make arguments about that all day. Cycling is a unique sport, because it’s a blend of man and machine, that’s being contested at 40-50kph per hour on an open road. In a soccer stadium, you don’t need radios because the manager can stand on the sideline and yell to his players. In all team sports, communication between coach and player is possible. Cycling would become the only team sport where that’s not possible if we ban race radio.

VN: What do you say to the argument that cycling was more exciting without race radio?

JV: Some people say it was more exciting in the 1970s, 1980s, but there are a lot of factors involved in that. We are open to any ideas about how to make racing more exciting. We can open up radio communication to the fans, have it streamed live online or have it part of the TV broadcast. By banning race radio, you introduce an element of randomness into the race. If a rider gets a flat tire, his teammates will never know, the team car cannot tell them, the race is rolling along at 60kph, and this guy is effectively out of the race because of a puncture. Without race radio, the team car gets to him slower, he might not have teammates to help him back to the peloton. It’s just a randomness and I honestly don’t think fans want to see a poorly conceived race that is more randomized, that the luckiest rider wins. That’s against the ethos of the sport. In cycling, which is a team sport, the best athlete on the best team with the best strategy with the best coaching, at the end of the day, should win. In order for that sequence of events to occur, you need communication.

The statements that bothers me the most is the last two lines of the interview. “The luckiest rider wins.” And “the best athlete on the best team with the best strategy with the best coaching….should win”. Man, that is a lot of bests. Seems like trying to get all those bests together seems kind of lucky.

I have to disagree with Jonathan on this. Say he’s right, and not having communication makes the results seem “lucky”. I think that this is one of the best and most unique aspects of the sport. This isn’t a marathon. In cycling, the most physically gifted guy doesn’t get to win every time. That is the beauty of it. I’ve said this many times. If you raced the same race, everyday for a year, with the same riders, it would never, ever, turn out the same. That is a good thing. Not a bad thing.

I’d much rather be spectating an event that doesn’t have a predetermined outcome, than what we get to watch now in the sport of bike racing. Especially stage racing. Each race turns into a team time trial until the decisive moments. It is boring.

But, I don’t think he’s right on his whole premise. I think that it isn’t necessary luck when the “underdog” wins a bike race. It is a combination of a billion different things. And, attributing this “wrong” result to a lack of communication between the best rider, and his team, and a coach is just bullshit.

Race radios take the instinct out of the sport. Instinct is how you win many bike races. It is the feeling that allows the rider to risk, to take a chance that doesn’t have a high percentage shot at succeeding. It is what makes watching bike racing exciting. 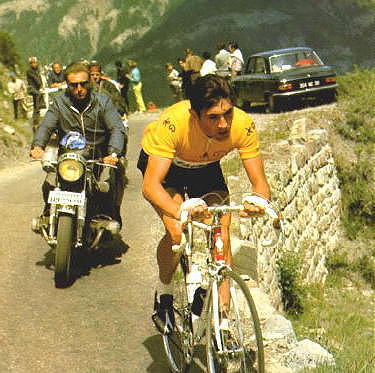 Eddy got pretty “lucky” winning 8 stages in 1970 and ’74 at the Tour de France. He won the lottery in 1969 when he won all 3 jerseys for the general classification (yellow jersey), points classification (green jersey) and the mountains classification.

9 thoughts on “Eddy Merckx – “The luckiest rider in Cycling History””