I don’t have all morning to comment on the radio deal. I plan to ride my bike for awhile today. But, I am aghast, but not completely surprised, that the USAC has preempted the UCI to allow radios in US races. It is stupid and wrong. The USAC does nothing to break ways with the UCI when it comes to discarding rules that have no business in our races, but on their own, makes a ruling on an issue that is a worldwide problem.

Here in the US, the team directors can’t watch the races live, on TV, while following. So in reality, by allowing the use of radios in NRC events, it gives a real advantage to the teams with their riders in the top of GC because they are the only directors with a view of the race. The cars further back in the caravan don’t have a view of the race, thus their teams are at a disadvantage. It makes for a complete unfair playing field.

You can make all the arguments you want about the need for radios for any safety reason. All those reasons are bullshit. Here are some of real reasons.

#1 Radios justify the need for some guy like Johan Bruyneel or Bjarne Riis to be at the race, in a team car following, sitting on their butts for hours upon hours. They pretty much have nothing to do than watch the race on their dash TVs if they can’t “mastermind” their tactics through a radio.

#2 Radios allow the stronger teams, and teams with one “superstar”, to beat up on the other weaker teams and riders. Think about it. There at 22 teams in the Tour de France. How many teams on a mountain stage actually need the use of their radios. Not many. So, the teams that are controlling the race, and the riders in the front, use the radios so they can be more efficient beating up on everyone else. This is laziness in my mind.

#3 Radios make riders that haven’t paid their dues look like seasoned Pros. There is a long learning curve in the sport of cycling. Radios make it so guys with the physical ability, but not the mental capacity, excel at the sport early on. And it allows guys that would have never understood the mental/tactical aspect of the sport to excel because they don’t have to make any decisions on their own. Puppets. Dumb riders shouldn’t get to win bike races.

I hate the “new” tactics of the sport. This control thing is boring-ass bike racing. Not having radios isn’t going to change that. But, it does make it harder. I am a big fan of the intellectual aspect of the sport. That has nearly become a thing of the past in most big stage races.

One of the best parts of the sport is it isn’t a given that the best rider wins on a daily basis. That is one of the reasons that they race three weeks in the Grand Tours. In theory, after that much bike racing, the best guy ends up with the shortest time.

You might know how hard it is for 9 people to be on the same page on any subject. Throw all the other outside stimuli that happens during a normal bicycle race at those same 9 guys, and it is very hard to be in sync. That is the beauty about having the right chemistry/make up of a sporting team. But, radios make it so a 9 rider group can act as one. Very easily.

Name one other sport that allows each participate to have a radio and be in contact with whoever they want. And don’t call NASCAR a sport. There isn’t one. And there is a reason for that. The reason sport works is because of the special, unpredictable happenings that occur. That is what makes cycling one of the most interesting sports to observe. You could do the same race 100 times and never have the exact same results. That is a fact. It is a great, unique aspect of our sport. Radio take away much of the spontaneity of the sport.

My brother said something that sums it up pretty well. A “One rider, one brain, rule”. I don’t know how anyone can against that. 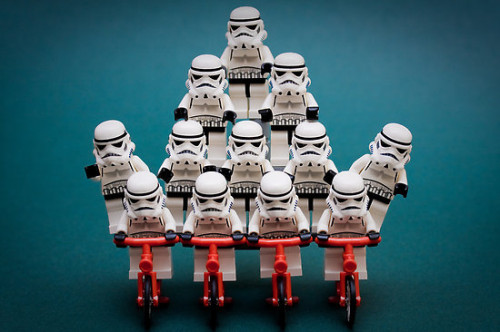 A vision of a Tour de France team of the future according to USAC.