I’ve been trying to get shit together all day to go to Austin tomorrow morning in the wee hours. My hands are done. My lungs are more than done. I decided to relax a little and clicked on Velonews and Cyclingnews and there are articles on Raul and Alexi.

I raced Raul a few times the last year. We’ve always got along great. He pushed me the last 8 km to the finish in Truckee Stage in the 1985 Coor’s Classic. I wouldn’t have finished without that. Raul isn’t doing anything special. He’s just riding his bike. He won the Mexican National TT Championships last year riding something close to 50 km an hour. That is pretty fast.

Then there is Alexi. I guess I was a day ahead of John (Wilcockson). If he’s been riding 200km days back to back, he’s not going to have much leg speed. That is after pulling a trailer on a Trek 2100 for years. I’m not sure that is his best course of training, but that’s just me. Maybe he thinks he’s training for the Tour again, but here in the US, I’ve gone to Redlands with less that 1000 miles on my legs and have fared pretty well. But, maybe after all this years off, he needs some base miles.

It is relieving to know that I don’t have to have a comeback. I’ve never found anything I like to do better than what I’m doing now. I guess it took Alexi and Raul a little time off the bike to realize the same thing. 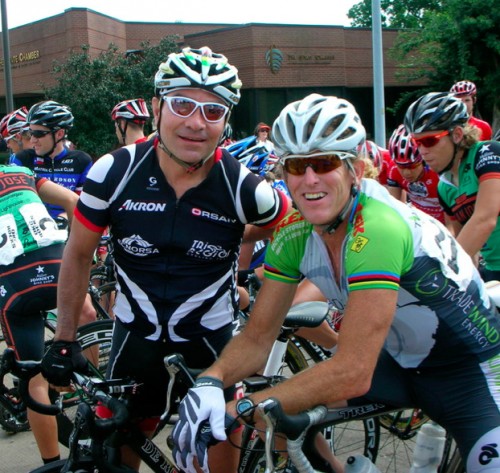 Raul and I at a criterium in Dallas last summer.

2 thoughts on “Raul and Alexi”