Man, that guy isn’t a brain surgeon. It is amazing to what extent these guys will go to try to ride their bikes fast. Here is the first article about Riccardo’s kidney problem a couple days ago. I was thinking the worse. Now here a piece that says that he was having some “issues” with a blood transfusion that caused the hospital visit.

This whole thing isn’t confirmed, though. Here’s the statement by his team director – Luijckx hasn’t been able to reach Riccó and his manager and while he’s not overly optimistic, he’s trying to maintain the appropriate level of impartiality. “We have to make do with the news from Italy. The fact that he is not reachable, I find it strange,” Luijckx told news agency ANP.”We assume it’s true. But as a good employer should, we apply both sides to the present situation. We are working hard on it, but it is not easy. “At the moment I’m assuming the worst.”

Isn’t it so nice that they decided to let him race again this last season and win all those races. And he’s still on the start list for the Tour Méditerranéen Cycliste Professionnel in two weeks. Maybe he’ll feel better by then.

How many chances to do these guys get? Is it all going to have to go so underground that they start killing themselves again like they did in the ’90s? Kind of seems like it.

This is all seems like some kind of interlaced conspiracy. The cycling community is so small. Here’s a link to another group of guys that seem can’t seem to get it through their heads that doping is now “frowned upon” from the police, sporting media and some of us riders.

I guess there is too much money involved. I don’t know. It is pretty depressing in general. That is all I have to say. 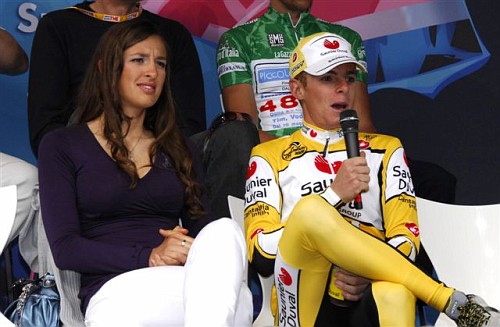 What a perfect couple.