I saw this article at Cyclingnews.com about the radio regulations while spending my extra few hours at the Kansas City International Airport.

It seems that the AIGCP (Pro D1 & D2 teams) are planning to dig their heels in on the UCI radio rule and defy the ban. We’ve all read the pros and cons concerning radio usage in bicycle racing.

Personally, I think radios ruin the true tactics of the sport. I never felt like I was lacking information when I raced without a radio. Actually, the opposite. I felt like I possessed more information than the guys I was racing with. I’ve always felt that one of the most interesting aspects of the sport is that you can excel by being more observant. And you are rewarded by holding your position at the front of the field.

The safety concern is bullshit. I guarantee that if radios just received a broadcast of a generic race safety spiel, not one rider would carry a radio. So, it comes down to tactics. It is a lazy mans way of not having to pay attention. The riders now have never had to pay attention, so they have no way to come up with their own tactics.

So, the AIGCP voted to defy the radio ban. And who do you thinks casts their votes in the AIGCP vote? The team directors. I think the main reason they want to defy the ban because there would be no reason for the team directors to be sitting on their butts for hour and hour, day after day, and not being able participate in the race. Most of the current team directors were professional cyclists before. They had their opportunity to participate in the races in their earlier careers. Maybe they should let their guys do that on their own. I think many riders would learn to appreciate the sport in a completely new and exciting way. 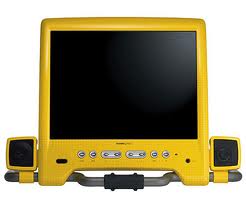 Maybe the riders should all have TV's on their bars so they can watch the race they are racing. 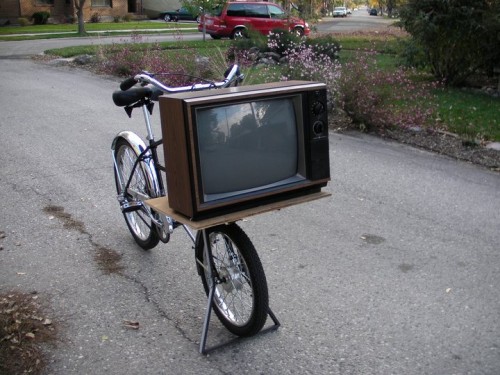 Or maybe each team should have a designatied rider to carry something like this.

One thought on “Professional Teams to defy Radio Ban”