I didn’t drink any coffee before I was 30 years old. Not really until 34 I think. Now I drink a ton. At least in my estimation, it seems like a ton. Most days it’s twice a day. I drink tea in the morning. I started that somewhere in my late 20’s. I’m not sure when I started drinking coffee. I think it was living with Michael Engleman in Boulder. He could drink an unbelievable amount of coffee. And alcohol.

The first time I remember racing with coffee is at a Norba National in Spokane. Paul Biskup brought me a double espresso 5 minutes before the start. I had a very good race. That started the whole thing. Gee, thanks Paul. Now I drink coffee religiously before every race. It is part of the routine.

I’m not sure if coffee is good for your health or not. I think not, but there are studies out there that say otherwise. I know that when I’m sick, I have no desire for coffee. Tea is good then, but I never have the stomach for coffee when I’m sick. That tends to tell me that it isn’t that great for you in general. I know that thought process is flawed, but that is how it works here.

I’ve experienced coffee all over the world now. Guatemala, Brazil, New Zealand, etc. It’s amazing how much different it is. I was interested in who drinks the most coffee as a country. I found this list of amount of coffee consumed per capita. I was surprised. But, after looking, it makes sense. Seems the colder the place is the more coffee consumed.

I’ve had some of my best pre race encounters at coffee shops before a race. I few years ago, I was standing in line before the Redland’s criterium and some guy came up and introduced himself and said he was a fan. He told me it would be an honor to buy my pre race coffee. I told him that was okay, but he insisted. I ordered a quad espresso. I was a little embarrassed, but that was what I was ordering. Anyway, I ended up finishing 5th in the criterium. I went across the line and a couple hundred meters later, this guy was standing there, crazy happy. I wasn’t that impressed with my result, but after talking to him for a bit, it became contagious. He said it was the highlight of his bike race spectating experience. I rode back to the hotel thinking how great it was to be so easily pleased.

Anyway, yesterday, working on the car, I drank a fair amount of coffee. Last year, working on the roof, 18 hours a day, I was way over the limit. 5-10 a day at least. Manual labor requires coffee for productivity. I’ve never thought of cycling as manual labor, but it really is just that. Maybe that why I enjoy construction. It’s a lot like racing bikes. They both involve physical labor, coupled with mental considerations and prowess. 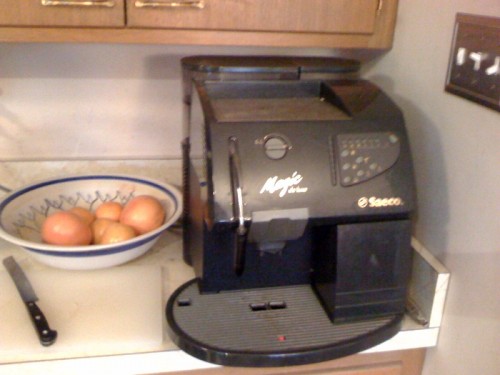 I've had this Saeco machine for a while. When it breaks, I'm going to upgrade. It is way too easy, push a button and espresso comes out. 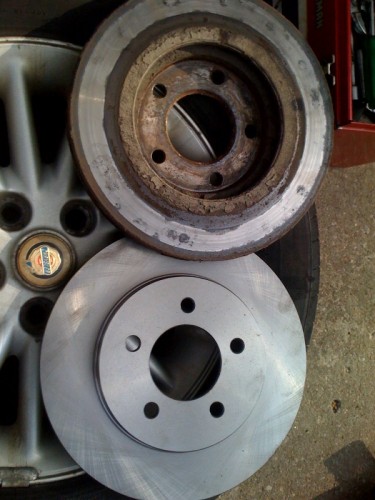 There is a certain beauty of new brake rotors. Mine were pretty shot.