I’ve done 3 cross races in 3 days only twice before. That was when Nationals were in Providence and you could race Friday, Saturday and Sunday. It is a pretty hard sport to be doing it day after day, especially if one is later at night and you have to clean and repair your own equipment. It gets old.

Sunday went worse than both Friday and Saturday combined. I guess the random list that had me starting 18th wasn’t UCI official, so they repicked the list and there I was at the end once again. I don’t know about this random starting position thing. It seems improbably that I’d be in the last 5 guys three days in a row. Whatever, it didn’t really matter because I got caught up in a crash coming out of the start. I hit my head pretty good. Good enough that I can’t remember what happened.

First thing I knew I saw Joseph Schmaltz laying on the ground curled in a ball. I had talked to Joseph before the race about helping him finish in the top 15 top get some UCI points for the European races he’ll be doing around Christmas. Anyway, I grabbed Joseph and told him to get up and get riding. Then I went back to my bike and had to put the spring back on one of the cantilevers and got going. I was way, way behind in last once again.

It was a luxury not to have to panic because I felt no pressure. It didn’t take too long to get back to the end of the field. There was a pretty big log jam up the ride/run up. 1/2 a lap later I caught up with Joseph. I was pretty motivated thinking we could ride back up to UCI points. It didn’t work out that way. There were too many guys to pass early and by the time we got into the low 20’s, 15th was nearly out of reach. I pulled Joseph around for 3 or 4 laps and then he took off. I just rode the last couple laps at training speed. There wasn’t anyone in front of me or behind me. I was pretty done.

I’m not sure how it would of played out if I hadn’t have fallen. I wasn’t bad, just ran out of juice. The course was super hard with a super hard, long climb and another sketchy descent. Plus, another super steep short, ride/run climb. No place to rest.

Jamie Driscoll made a smart decision to skip Saturday and then school everyone on Sunday. I’m sure he has enough UCI C2 points by now, so he’d just have to throw them out. Winning a C1 is way better. Todd was riding great. He should be a favorite at Nationals if he can bring his form up just a touch in the next two weeks.

I’m back in Kansas, but am flying out to San Diego tomorrow to train for a week before Nationals. I’m pretty sure I’m going to skip the races in Portland next weekend and race a local race in LA. Then head up to Bend on Tuesday. Looks like it is pretty snowy there. Might have to make a phone call to confirm that. That would be good. 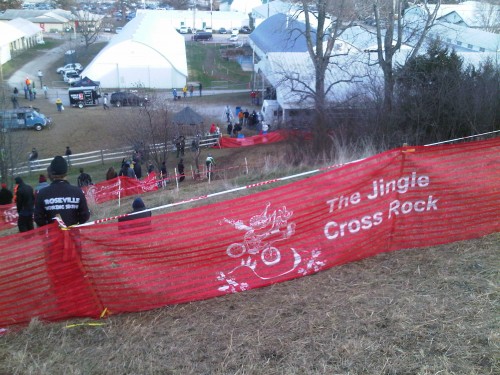 It was pretty steep drop down from the top yesterday. 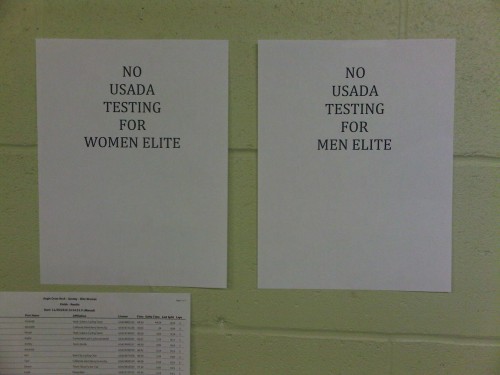 They announced during the race that there was drug testing and you had to go to registration to see the numbers. This is what was at registration. I have no idea what the announcement was all about. Maybe the announcers just wanted it to sound like this was big time cyclo-X racing and that the riders were going to be tested. Stupid.