Not much to report here. I started 48th out of 56 guys. The start went well and I got by 25 guys or so in a right hand sweeper. I ended up right behind Chris Horner, who was on the 2nd row. We had a little conversation about how great of a start he got and how low our heart rates were considering we were racing, ie not going very fast because of traffic.

The technical, tricky part of the course was a long off camber descent with a couple switchbacks in it. It wasn’t too bad if you have MTB skills, but not many of the riders possess those. I was alright though. I moved up to probably close to the top ten after the descent.

Then, a problem. I fell in the gravel on a high speed left corner. It wasn’t the gravel, but the dirt underneath was frozen and ice. I destroyed my right shifter and limped into the pit. I had a hard time finding my spare bike because of all the mechanics standing around. Chris Horner, Tristan and a few other fell on the same corner. It was dark and you couldn’t see the frozen ground. When I finally got back into the race, I was in 30th. Right back with Horner, Joseph Schmaltz and Bill. I wasn’t climbing the hill too good. Horner and Joseph dropped me, but on the descent I was good and I never saw them again. That is until when I was stopped 5 laps later because my chain snapped climbing.

I’ve only broken two chains before in my life. Now 3. I have no idea why. It was a Shimano chain. Not on the connecting pin. I had ridden up to 14th when it happened. I was only shooting for 11th, so I was going to have to shut it down anyway. I was up until 2am putting a new shifter on my bike and screwing around. I am super sleep deprived the last two nights. Racing today on 2:30. I’m on the last row today. But, Sunday I’m set. The course has a super long run up, which I’m planning on walking. Or maybe jogging. Just depends. Still shooting for 11th.

So, a swollen knee, scrapped up elbow and gamekeeper’s thumb is the extent of my injuries. The thumb is going to be the worst for racing. I think I’ll go take a nap. 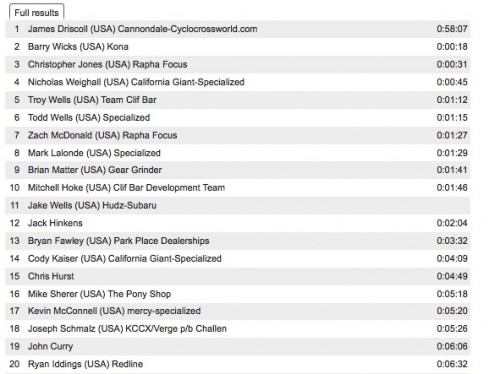 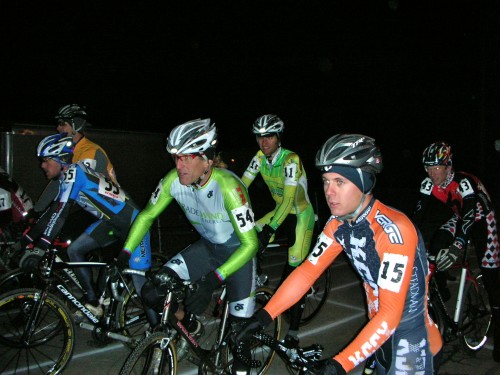 There are two guys lined up behind the Kansas row. Joseph had a clear line on the left and started off his bike running. It didn't work out for him. I think he mounted too quickly and should have run more. 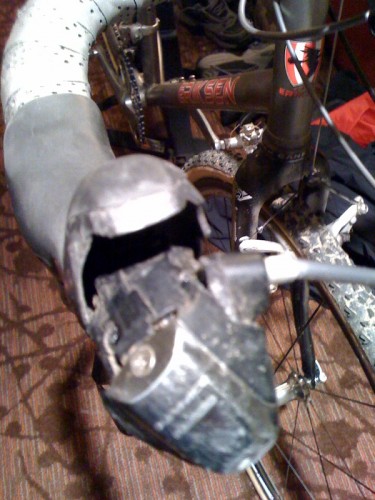 This shifter was DOA. 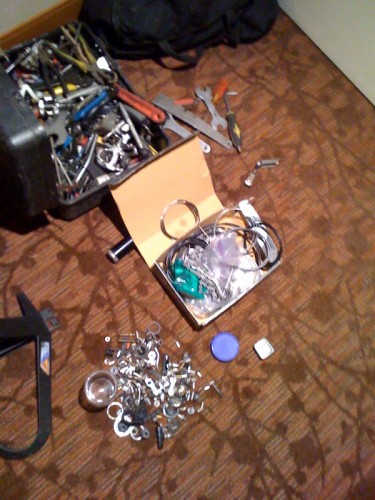 The hotel room floor at 1 am.

One thought on “Jingle Cross Recap”