Yesterday was a bust in my opinion. I won the race. But I was riding like shit. Probably something like a 4 on a 1 to 10 scale. And I can’t come up with a reason for it. I felt pretty bad on Friday training, but I thought that was because of all the running and sit ups that I’d done. But, yesterday was 3 days after and that is too much time to be having trouble. I never really got going. I got a mediocre start and sat on Brian most of the first whole lap. I wasn’t turning very well, I wasn’t accelerating good, nothing. I off took off after one lap before a technical descent, and still nothing. I put maybe 15 seconds on Brian and thought I should just wait up again, but there were 5 guys only 50 meters or so behind him. So, I kept flailing around for the next 45 minutes. Every once in a while I would get a spurt, but generally, I wasn’t good. Finally on the last lap, I had a little bit of power. I’m not sure if that is because I was relieved it was nearly over or what. I rode the hard hill section off my seat, the fastest of the day, by far, by that still doesn’t do anything for my morale.

Brian ended up finishing 2nd. He held off Mark Savery, who had burped his tire at the start and came back from DFL. Bill was racing back in a group, but finally got going the last 2 laps to come back to 4th, which was good. He said he completely sucked for the first 30 minutes, then felt better. At least he had that.

I don’t get it. Maybe it was because it was pretty cold. Lower 30’s. I didn’t expect that. It was going to be in the 60’s in Kansas and was supposed to be in the upper 40’s there. Not even close.

Here it is the next morning and my lungs are still toast. All three of us yesterday coughed a bunch driving back. Guess those crazy cyclocross starts in cold air isn’t that great for you. And I feel like I have a bad hangover. Not good. Like I said before, I don’t have a reason for it.

I guess I’m still going over to Kansas City to race this afternoon. The race is at the same place I seized up and cramped a couple months ago in 90 degree heat. It is on the side of a hill and the race has a Le Mans-style start. Today it’s only supposed to be in the upper 60’s. Too hot for cross, in my opinion, but better than 90 or 30 I guess. I’ll let you know how it goes. 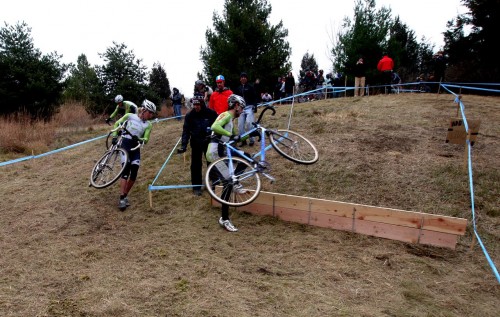 Bill and I following Brian early on the first lap. It was a weird dismount, barrier combination. Hard to figure out how to do it quickly. 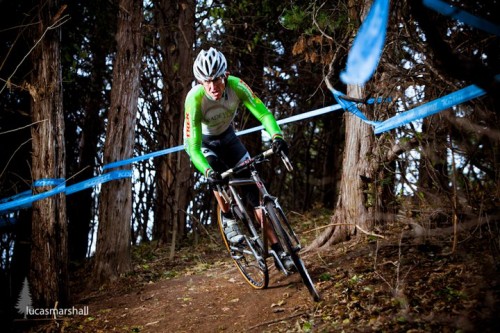 Nice photo in the woods. 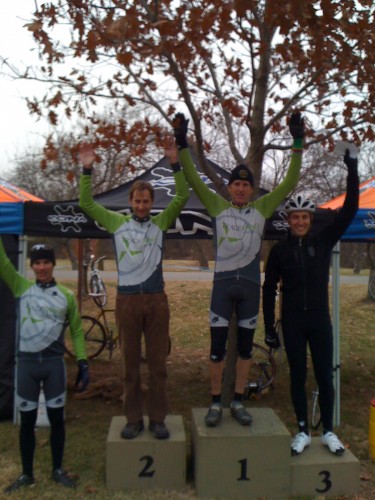 Not a pretty podium shot. Brian has to learn he only gets to put up only one arm for 2nd.