I think it is strange what rules that the UCI and USAC decide to try to implement and what rules they enforce. I’m one of those guys that think that the riders should enforce the rules. But, a lot of the rules that are currently on the books aren’t being enforced and there are proposed rules and current rules that have no place in the sport.

I’m bringing this up because of the USAC board meeting last weekend that had two proposals to look at that seemed really not thought out. I’m talking about the proposed ban of the helmet cam and the proposed rules concerning juniors riding tubular tires and carbon wheels.

The helmet cam rule also applied to anything strapped to a helmet. So, goodbye 24 hour racing that requires helmet lights. Goodbye Professional and Pro want-ta-bees that put their sunglasses up on/in their helmets. That would be banned too. I have not heard of a case where a helmet cam or light caused injury because it compromised the integrity of a helmet. Maybe there is a case out there. I don’t know. But, there are a ton of people riding at night with lights, crashing. They would be crashing way more without their lights.

And the junior thing. Dumb. I just got back from riding a ton in Colorado and then the canyons of the Santa Monica Mts. I hate riding clincher tires in those situations. When you flat a tubular tire, you are still riding on rubber. I’ve ridden a tubular tire a couple hours without even ruining the rim. I rode with Eric Heiden for over an hour in the Coor’s Classic during the Boulder Mt. Road Race. I was having a pretty bad day, obviously, but Eric was doing just fine riding on a front flat. When you flat a clincher tire, you go straight to the rim. Descending on a road bike isn’t possible on a flat front clincher. Riding on the rim isn’t really possible. But, falling is. If I trained in the mountains alot, I would exclusively ride sewups. I would not like to start a criterium on clincher wheels. Tubular tires are just that much safer. In cross, it is way more important if you flat and want to keep riding. Tim Johnson lost the cross nationals in Baltimore mainly because he flatted a clincher and lost so much time getting to the pit.

If they are trying to lower the cost for juniors, let’s make them get rid of the $$$$$ carbon frames that explode every time they even think of crashing. Or lets not charge our young riders out the ass every race they enter. Let’s make the entry fee for junior $10 at any event. I’d happily pay a couple dollars extra every race to supplement our young rider’s development. There are lots of ways to make this expensive sport more affordable for all the riders, but limiting important equipment makes zero sense.

So, we’re trying to make more and more rules to govern a sport that doesn’t need that many more rules. This sport has been around for more than a century. I don’t get why we’re always making more and more rules. We need to enforce some of the rules we have. One that nearly ever being enforced is the “taking the hands off the bars” rule. Or, engaging another rider physically rule. This is happening every race I race and not one time has a rider been penalized in a race I’ve done.

We’re too busy putting tire gauges on our cross tires to make sure the tire width isn’t 1 mm too wide. We’ve made virtually all clincher cross tires illegal in UCI races. Obviously from above, I think that sewups have distinct advantages over clinchers in most situations. But, there are places and situations that they work well. I’ve measured a bunch of Hutchinson tires, plus Michelin Mud2’s that have 30mm printed on the sidewall. They are not under the new UCI, 33mm in width rule. So, sealing up the best clincher cross tires at UCI races isn’t really an option anymore. Talk about adding cost to the sport of cycling. Let’s make everyone go out and buy nice expensive tubular cyclocross tires that pinch flat every few races. Including juniors.

BTW-Neither of the proposals passed. 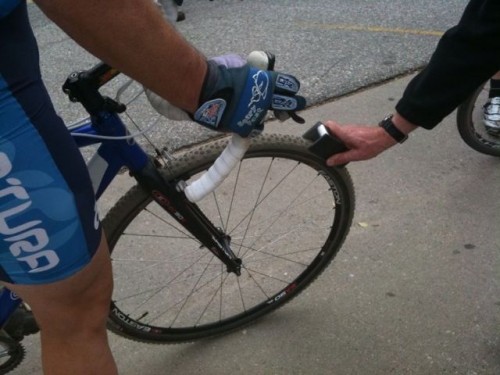 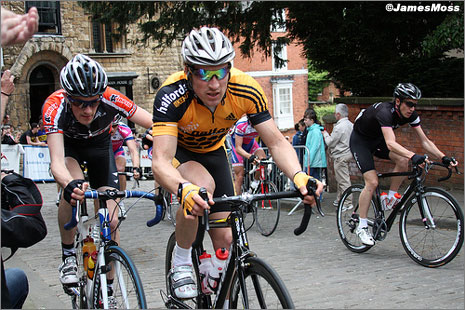 Let's restrict the pushes to friendly ones.