Saturday morning was the Berryman Epic MTB race, an hour south of St. Louis, in the Mark Twain National Forest. It is somewhere around 60 miles long, give or take a few miles. It is mainly on single track and horse/hiking trails. There is about 15 miles of gravel road riding mixed in. One long race, no loops. The trails are rocky. Really rocky. It is a mass start race, with a 250 rider field.

I knew I was riding just okay. But, that is better than badly. Last year it rained 9 inches in the two days before. This year was exactly the opposite. No rain forever. The course was super dry and loose. So loose that descending was much trickier than with water running down the trail. And climbing was only a seated motion. It was nearly impossible to stand without spinning your rear wheel. And the temperature were in the lower 80’s. Not good for me at this time of year.

The race starts on a road and goes up a mile long loose gravel climb. At the top of the climb, there were only 4 of us left. Bill Stolte and I from Topeka, plus Jon Schottler, who won last year and Scott Henry, from Austin ,Texas. I felt pretty good at the top of the climb. I planned to enter the first single track in the lead, but Scott Henry sprinted like crazy and dove into it ahead of me. Afterward, I found out there was a $50 prime for the first guy into the single track. I couldn’t figure out why he just pulled over and let me by right after we turned.

Anyway, there are 4 check points on the course where you have to pick up colored zip ties. The first one is around 11 miles. I led most of the way to this checkpoint. Bill fell somewhere and when we got to the checkpoint, he was nowhere to be seen, which surprised me. The next checkpoint is 15 miles up the trail. I kept screwing up in this section. My left pedal’s tension was way too loose and every time I hit a big lip, my left foot would come unclipped and I’d have to dab. Scott was doing little interval sessions up the climbs. Afterwards he told me it was because he was riding only a single 36 tooth ring in front and a 36 in the back, so with 29’r wheels, he was a bit over geared.

The three of us went into the 2nd checkpoint together. Trudi was there and I got a couple bottles. Descending down to the road, I was leading and flatted on nothing. I mean there was barely a rock to be seen. And that was the end of the story. It just got worse from there. Once you have to put a tube in riding here, it is nearly impossible to keep air in it. It took me forever to get the valve stem out. It was a super long stop. Bill and Kip Biese, from Colorado Springs, caught me. I talked to Bill a bit and thought he would ride with me, but when I passed Kip, Bill didn’t tag along. I wasn’t going that good on this section. I had lost motivation pretty much. When I got back to the last feed zone/checkpoint with 19 miles to go I had decided that if I was less than 5 minutes back I would put in a big effort. Trudi said exactly 5. But, she told me after the race it was 6 minutes. Anyway, I started riding pretty hard. The next 15 miles are the rockiest parts. I made it about 5 miles, going pretty good, before I flatted again. I had grabbed another tube and air from Trudi, so I still had two. I changed this tube pretty quickly. I keep riding pretty hard, but I saw Ryan, the promoter out on the trail and he told me I was 7 minutes back. I rode a couple more miles and flatted in a creek crossing. The last 6 miles are on gravel. I couldn’t see anyone behind me, so I just cruised in.

It turned out that Jon and Scott never split up and actually sprinted to the line. It was kind of a screwed up finish, 20 meters after a loose corner. Scott led before the corner, but Jon ended up coming by him at the line. Crazy finish for such a long race.

The course record was smashed. Nearly 25 minutes faster than last year. And, in my opinion, the race was much harder than last year. At least my back is telling me that. My actual riding time was 20 seconds slower than the winning time this year. That was good, I guess. But, still disappointing. I definitely need to keep more up to date on the tires that are available for rock stuff like this. I had a slit right in the very top of my tread.

Bill cruised in a few minutes behind me for 4th, which was the best he was going to do. Catherine Walberg won the women’s event for the 2nd year straight. She had been trailing the leading woman for the first 2/3 or the race, but starting riding fast at the end. 2nd ended up flatting 3 times in the last section, so Catherine beat her by nearly 17 minutes, I think. This course is so rocky, that even half-pint Catherine burped her tire and had to reinflate it.

Scott and Ryan do an incredible job putting this event on. It is an unbelievable prize list. I had nearly a grand in my pocket for 3rd. And forget about the $$$, the life experience is off the charts. We stayed around and drank beer for a few hours afterwards. It was great listening to everyone’s story of their day.

Catherine had to drive to San Antonio, Texas, and I was going up to St. Louis, to give some pointers to a woman racer at a cyclocross in St. Louis on Sunday, so we had to get going.

I’m going out to Colorado tomorrow to build a 400 ft. cedar fence up in Silverthorne. My only worry is digging the post holes. There is a ton of river rock up there. 50 plus post holes could be a problem. We’ll see. 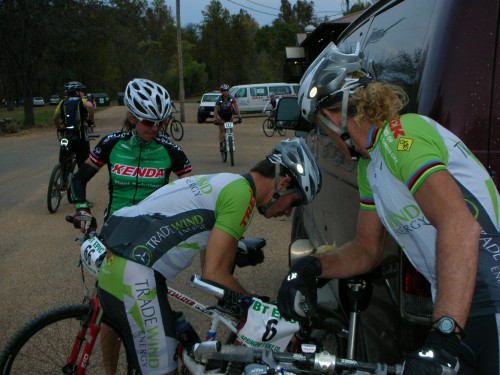 Catherine, Bill and I getting ready. 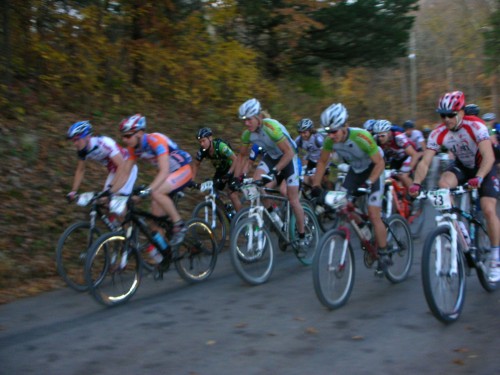 Bill and I both got a pretty good start. 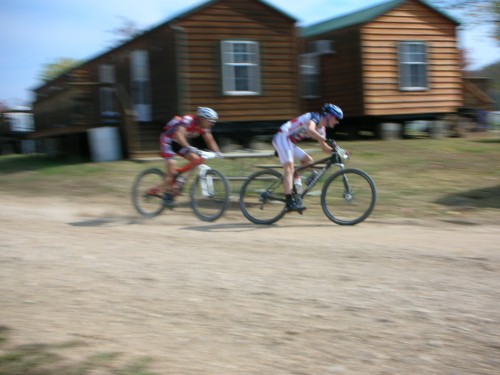 Jon coming around the outside in the final corner to win. 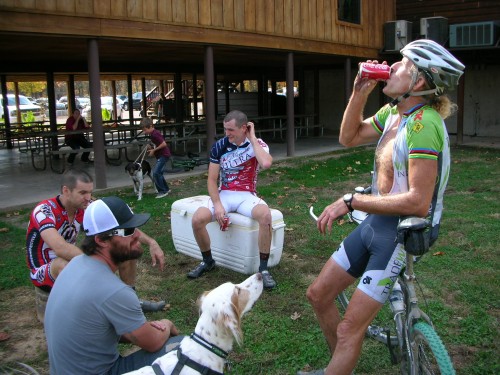 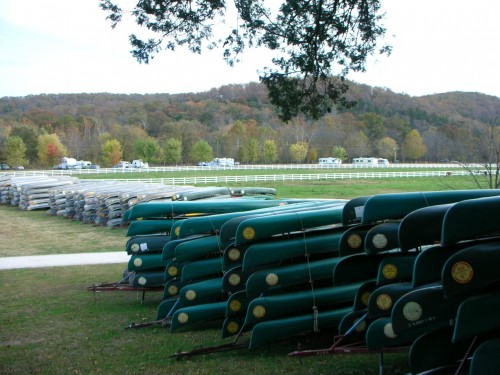 The race starts and finishes at The Bass River Resort. Floating in the rivers is the main activity here. 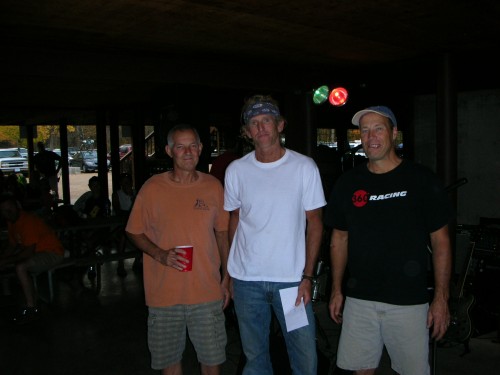 Doug Long, Lyle Reidy and myself for age group awards. I've know these guys forever. They are part of the backbone of midwest MTB racing. Both are rider/promoters, and great ambassors of the sport.

4 thoughts on “Berryman – It was Epic in a different way”