Yesterday, late afternoon, I was going to ride ‘cross (for the 2nd time this year) with Bill and I get a call from my brother Kris. He had a run-in with a automobile on the way to the Tuesday night ride. So, I undress and get in my van to go get him and his bike. He said he thought his collarbone was broken. It was only a few blocks from our house.

When I got to the intersection, there were a couple police cars and an ambulance had just arrived. Kris was across the street and his shoulder was sagging pretty badly. I walked over as the EMT’s were getting out of the ambulance. When Kris turned around to talk to them, I realized that he needed to go to the emergency room. His whole shoulder muscle was hanging out. I felt his collarbone and it was fine.

Kris told the EMT’s that he didn’t need their service and that I was going to take him to the hospital. They said that they should look him over and it wouldn’t cost him anything. I told them that I would have him to the ER room before they were done taking his blood pressure.

That is when it started going badly for me. I told Kris to get into the van and the police officer told me to shut up and go to my car. She was shouting. I said something back, like I’m taking him to the hospital. She told me that if I didn’t go to my van she was going to arrest me. I asked her for what. She said shouting. I told her that wasn’t against the law. That is when the handcuffs came out.

She told me to put my hands behind my back, which I did immediately. Kris and the EMT guys were standing 3 feet away. She kept yanking my arms and telling me not to struggle and resist. I looked at Kris and the EMT guys and calmly said, “does this look like I’m struggling.” She told me to sit on the ground and cross my legs. It was something out of a “Cops” episode. I asked her if the she was having a bad day. That didn’t sit so well. Then she proceeded to tell him what she needed to do. Anytime I tried to ask a question, she told me to not interrupt her/shut up or something of the like. She told me that she needed to finish her paperwork. I asked her if her paperwork superseded medical care? She said that if Kris wanted to go to the hospital in the ambulance, he could, but if he wanted to go with me then she needed to finish.

She wouldn’t let me talk anymore and told me that she was going to arrest me or I had a choice to go back to the van and sit and not interrupt. I told her I would go to my van. If my brother wouldn’t of been standing there dripping blood all over the ground, I would have told her to fuck off and let her arrest me. As she was taking the handcuffs off, she told me to put my right hand on my head while she removed the left one. I asked her what for, but don’t think she replied. Anyway, I went back to the van and stood around another 10 minutes while another police car arrived. In the meantime, the EMT guys were looking over Kris across the street. The woman police officer that handcuffed me spent the next 5 minutes explaining the last 10 minutes to the new cop that had arrived. I calmly walked over to the new guy and told him I needed to take my brother to the hospital. I asked him why she was so concerned with the paperwork and not so concerned with medical care. He didn’t really know.

Anyway, we left. Kris was bleeding all over the place. When we got to the ER room, he was dripping blood all over. A couple guys immediately took him back to a nurse, who immediately took him back into ER. Right then the police guy came in. I walked back with him. I asked him what the deal was. Why the woman police officer was more concerned about the paperwork than the medical treatment. He said something like if Kris would have left before the paperwork was finished, he was technically leaving the scene of an accident. Something like hit and run. I didn’t really dispute what he was saying. I was thinking, bullshit.

So, we spent the next 3 hours in the ER room. They gave Kris a CT scan of the chest which turned out good. And then spent a long time sewing up his back and finger. He has something like 50 stitches, internal ones too, in his back and a few more on one of his figures. Not too bad for running into a car that was going 35 mph.

This really was about Kris’ deal, but that was just an accident. An accident that turned out pretty good. He could have been hurt way worse than he was. He’s going to be pretty crazy sore for a while, but he’ll be fine.

But, what I don’t understand is the police. There is no place for guns and handcuffs at the scene of a normal bicycle/car accident. Especially when no one is pissed off about the cause. My brother needed medical care. I told the police where I was taking him. That should have been good enough. This threatening by arrest thing that the police use is just wrong. I have been handcuffed three times in my life now. This wasn’t one of the times that should have been the case. I can’t decide if I should call/ write someone at the police department or newspaper and tell them my story. Maybe I’ll just send them a link to this and be done with it. It will take way more than this incident to cause a change in this screwed up occupation. 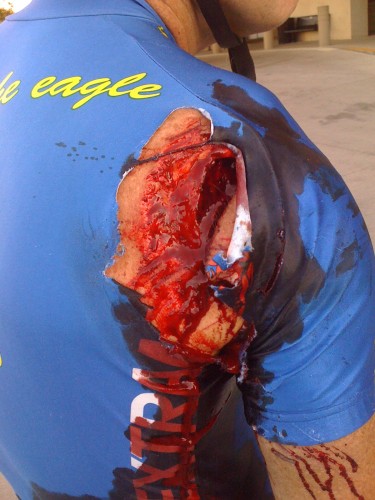 Picture from the scene. Pretty gruesome.

The repair in action. 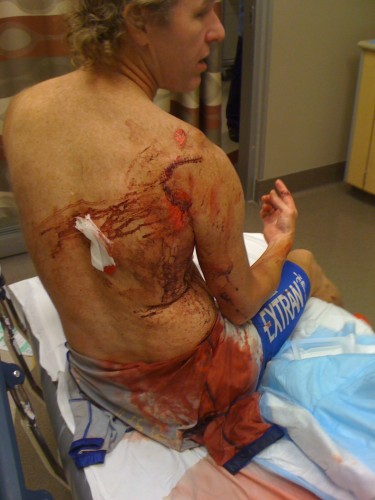 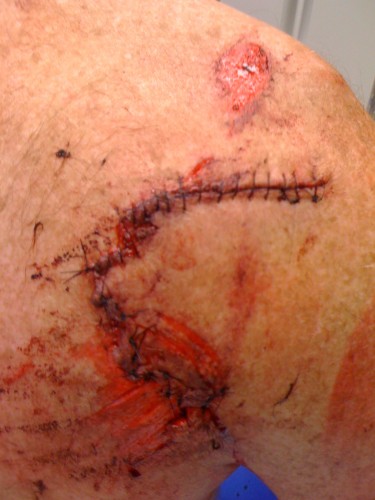