Did you guys see this article at Velonews.com about Alexi making a comeback next season. He retired in 1993. And has lived a rough life most of those years since. He got into religion and got his Olympic Gold Medal stolen/lost.

I haven’t seen Alexi much over the years. I think the last time I saw him was at Michael Aisner’s Coor’s Classic DVD reunion.

Alexi and I go way back. I think the first time I met Alexi was at Superweek back in 1977. I met him for sure at a Junior National Training camp, that following spring, in 1978, at the Olympic Training Center in Colorado Springs. The start of the Eddie B. era. He was riding for Monte of Italy from Aspen Colorado. He was eccentric then for sure. I’ve raced with Alexi all over the World. And he has never changed.

I have a million Alexi stories. A million and one.

A good one is from 1986. Greg Lemond chose me to race the Professional World Road Championships, after the Coor’s Classic. I was stoked. I had been at altitude for a couple months and the Worlds were in Colorado Springs. Anyway, the way it worked was that Eric Heiden was going to be named to the team, because of his fame. I was going to be first alternate. Eric had already went back to California and started medical school at Stanford, so I was going to ride. Alexi, by chance, was the 2nd alternate.

A couple days before the race, someone calls and tells me that Jack Simes, czar of USPRO, had bumped me and put Jock Boyer on the team. I rode over to the hotel that Jack was staying at to ask him about the rumor. I had never much talked to Jack. He was coming back from a run and I saw him in the lobby. I asked him about getting bumped and he goes off on me. Telling me that Jock Boyer was the reason that the Worlds were in the United States and deserved to ride the race and I had done nothing for the sport and deserved nothing…blah, blah, blah. I didn’t have much to say, for once.

Anyway, I was pissed, obviously. My team director from Levis, Michael Fatka got into the mix at that point and protested something to someone. The day before the World road race, Boyer was still riding. I went out with Tim Hinz, Levis team mate, and went for an all day ride on gravel into the mountains. A couple hours in, we got caught in a crazy hail/snow storm and spent over an hour in a culvert, freezing, while our bikes were getting buried by frozen mush. When it stopped, we limped into Cripple Creek and drank a gallon of coffee each and froze riding the 2 1/2 hours back, downhill, to Colorado Springs. We were destroyed. Late that afternoon, Michael came back and said that it was all fixed and I was back in. Boyer wasn’t on the initial team and he had been added way too late, so I was going to be able to ride.

There was no way that I could race 163 miles, with a gazillion feet of climbing the next morning. I was done. So, I called Alexi, who was living in Boulder and asked him if he wanted to take my slot. He said absolutely and that he’d been training exclusively for the event, which I thought was pretty weird. Anyway, as I called Jack Simes to tell him how it was going to go, I felt a certain amount of satisfaction, even though I was the one that got screwed.

I called Jack and told him I wasn’t going to ride, but Alexi was. Jack calmly replied that Alexi wasn’t going to ride because he and Alexi had an “agreement”. Jack tells me that Alexi was positive for a failed drug test in Crested Butte, a couple weeks before the Coor’s Race, and that Jack wasn’t going to sanction him, to allow him to race in Europe. I immediately called Alexi back in Boulder to ask him if that was correct. He said something like, “the results from the test weren’t back, but most likely it wasn’t going to be good.” And that he did have an agreement with USPRO. I said, “shit Alexi, why didn’t you tell me that before I called Sims.” He said that he thought maybe it would work out for him and he didn’t have anything to loose by letting me call Sims on his behalf. I was dumbfounded. But, Alexi is Alexi. And Boyer raced Worlds.

I am going to enjoy keeping up on the comeback of Alexi Grewal. Super entertaining for sure. I hope he gets the old guy team together for the resurrected Coors Class/Quizno Race. I’d be all in with that.

I love guys like Alexi that keep the sport and my life interesting. 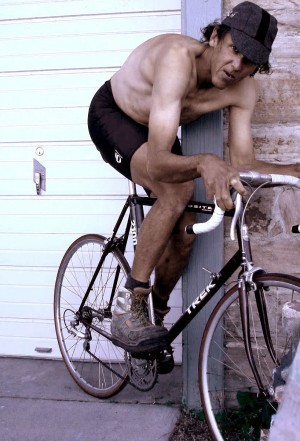 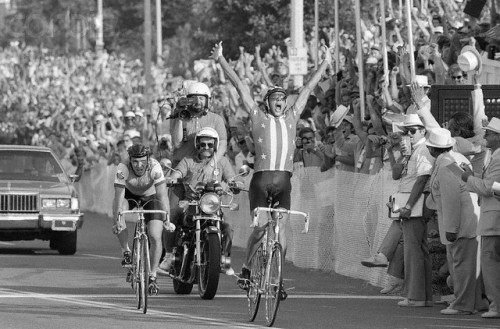 Winning the Olympic Road race in 1984 over Steve Bauer. 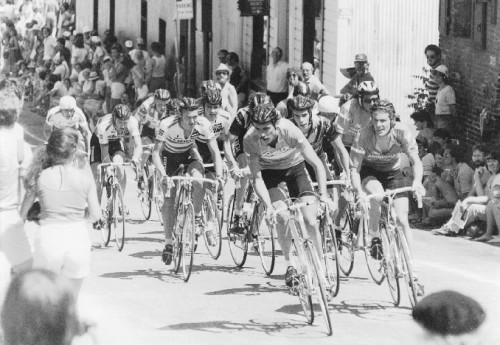 An old photo from Nevada City. Alexi is on the right, behind Dale Stetina. You can only see my shoulder. I am next to Andy Hampsten (team mate), who is next to Alexi. Chris Carmichael is on my left.