Okay. I’ve been avoiding this. It’s 5:30am and I have to drive all day today back to Kansas, so I figure I should get to this. Chequamegon. 2500 riders. 41 miles. Point to point MTB race. I have even been avoiding trying to “over” rethink Saturday. The morning before the event, everything went so smooth and perfect I thought something must be out of wack with the stars. There were 16 people staying with Dennis and everything went crazy good. There wasn’t any problem trying to get food, trying to use the facilities. I found everything that I needed for the race immediately. I even had enough time to do a web post and screw around on the computer. I knew something was amiss.

We got to the race way early. I went over to the start line to gawk at all the bikes already lined up and say hi to Gary Crandell, Mr. Chequamegon. I rode the 2 mile road section with the gang and rode 3 miles out the Birkie Trail and felt unbelievably great. I could pedal any gear at any cadence. I didn’t have any nerves just because I knew I was good. That is a very race occasion. Maybe once every season.

The race started out stupid as ever. The 2 quads that lead us out of town are more interested in dictating the race than controlling it. And take their own personal photos. The idea is to go slow until we turn right on Highway 77, then, in theory, we are supposed to race. This year, we took the right corner and then they brought the speed up super slowly until we were cruising along at 35 mph in line. Eventually the line snapped and two guys stayed on the quads and motor paced up the road on the back of the quads. They only got a few hundred meters up the road before they were done. The left into Rose’s field was chaos as normal. I was around 10th going into the field and quickly moved up to 2nd, with Doug Swanson going pretty good all the way across it. We caught the two guys that drafted the quads pretty quickly.

The next 15 miles were mainly on the Birkie Trail. We were going pretty fast. At the start, there were probably 20 guys still in the front group. Pretty soon it was down to around 12 of us. I felt great. There were a few attacks that didn’t seem to be much more than surges. I only put in a couple digs, just to keep everyone honest.

Then disaster. I poked a hole in my rear tire. Right before OO, 16 mles in. Pat Lemeuix flatted the same time. I had put 5 extra pounds in my rear tire right before the start, but that didn’t matter. It was a slice right in the top of my tire. I went through the motions of putting in a tube while taking to Pat. It took me nearly 4 minutes according to the video camera that was still running.

When I got going, I didn’t really have any plan. I thought that maybe I should just wait up for Catherine, but nixed that pretty quickly. I rode along halfheartedly for a mile or so and caught up with Jeff Bradley, who was staying with us. I thought I’d ride with him, but on the next hill, it was obvious that wasn’t going to happen. I rode a bit further and caught Vincent Davis, my friend from Topeka, who drove out from Denver to race. I was excited to have a purpose again. I pulled Vincent on the road up to the muddy section and knew there were 30 guys within a couple minutes. We were in the 50’s by then and I figured we could get back up to the top 15. Vincent went pretty good for 5 miles or so and then started to fall apart. Maybe he wasn’t actually falling apart. I might have been just going so good that it seemed to me that he was falling apart. I don’t know.

I nursed Vincent for about 15 miles to the bottom of the Seeley Fire Tower Climb. Then I left him. I knew it was getting pretty frustrating for both of us. I rode mildly hard the rest of the way. I caught 10 or 15 more guys and ended up 23rd. I was flying over the last Birkie section. I’d ridden it so many times this year. Maybe 20 or so. I was in my big ring, never in the granny in the back. If they timed from the start of that section to the feed zone at the end, I would have had the fastest time, by far.

I talked to Brian Matter, who won, and he told me the play by play at the end. (You can read his account of it HERE.) Jason Sager took off over the high point, but they all got back together by the last Birkie section. Sager attacked there and rode away from Brian and Tristan. He had about 20 seconds when he hit the road with 6 miles to go. Tristan and Brian worked together on the road and caught Jason at 2 miles to go, entering the Telemark Trails. Tristan attacked and Jason got dropped. Brian told me, at that point, he knew he’d won. He attacked Tristan and that was all she wrote. He soloed in a few seconds ahead of Tristan.

Vincent came in 30 something. Catherine was 5th in the women’s race, which I thought was awesome since she hadn’t ridden her MTB bike one day since last Chequamengon. She was disappointed, but that was short lived.

Okay, I know there isn’t much color in this, but I don’t have much in me. I’m not a morning person. At least not this morning. The general thought now is disappointment. It is rare that I have that kind of form on race day at an event that I’ve been keying on. But, that is bike racing. What I am disappointed with the most is the missing out on all the fun stuff at the end of the race. I could hardly stand Brian giving me the play by play. I wished I would have just been there to observe it. Better yet, participate. That is why I race bikes. Not for the results, but the experience.

We chopped wood again for a few hours yesterday and I’m more torqued from that than from the race the day before. I figure it is cyclocross training. Now it is cross season “officially” for me too. 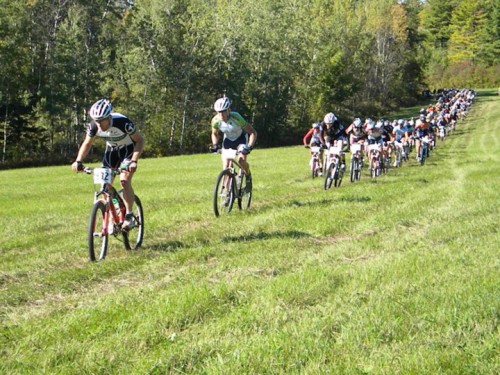 Starting to break up 1/2 way through the field at the start. Doug Swanson leading, me 2nd. 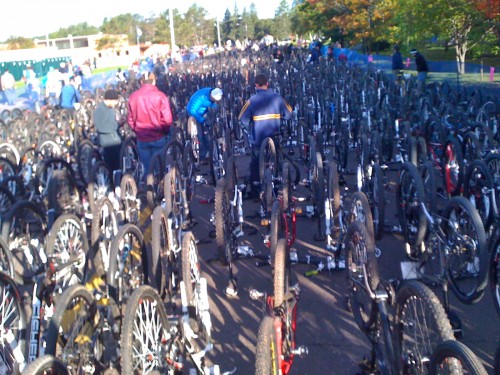 They start this sillyness the night before the race. It is a sight. 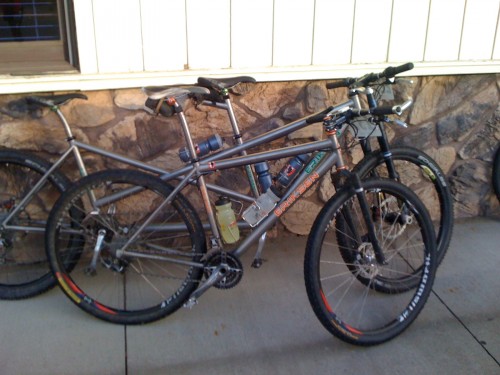 My bike and the Eriksen's tandem. 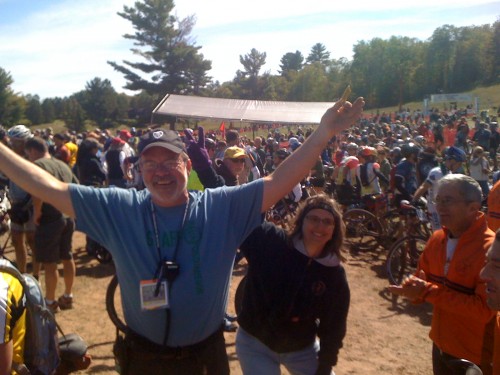 Gary Cradell on his game. 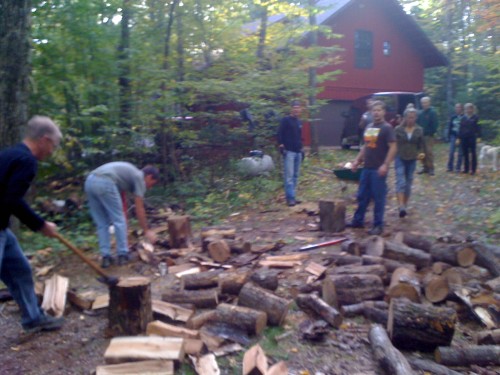 Wood cutting crew after the race. The magaritas were flowing. 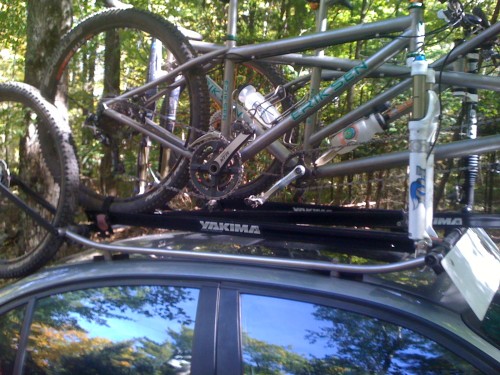 Kent's custom ti rack on this BMW. Only fitting for a ti frame builder. 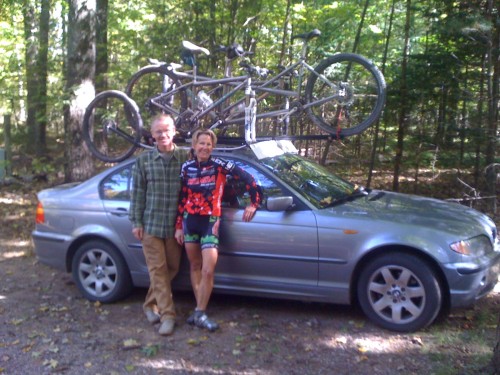 Catherine and Kent modeling. That is a pretty cool car. A silver BMW with three titanium bikes on the custom rack.

One thought on “Chequamegon Recap”