That was the headline at the Velonews article that Neal Rogers wrote yesterday. Click here for the full article. I hate articles like this. I’m going to know a lot/most of these guys. It is going to depress me. And anger me. There is no question in my mind that everyone that Joe names is guilty of something. Guilty enough that they should move on and do whatever they were planning to do after cycling. Maybe euthanizing animals, since they are so familiar with needles and such.

Two dozen guys. Shit. That is 25% of a 100 rider race. And that is just the number of riders Joe Papp was selling drugs to. It is amazing. And master racers? WTF? There is no justification either way. If you need to take drugs to race again a bunch of masters, then you should probably just be spend your weekends smoking pot, sitting on your couch, watching Baywatch. It is the same amount of fulfillment.

The line I hate in this article is – “The names will not be announced publicly until and unless the individual cases are resolved against the riders” Screw that. If they are being charged with a doping violation, then charge them and make it public. They can still defend themselves.

Come on guys, this is getting so, so old. I’m sick of it. There is no shame riding your bike slower. And shame doesn’t even come close to being a word to describe what you’re doing to your friends and sport.

And this article about Lance and his defense. You’re in a bad state if you have to hire a political spin doctor to speak for you about doping violations.

Obviously the penalty for the doping violations isn’t close to enough to persuade guys from using drugs. That needs to be addressed. Again. That is going to take awhile. I see that Floyd is going to World’s in Australia to talk at the anti-doping conference there. I’d like to have a seat at that conference.
That would be worth the plane ticket. 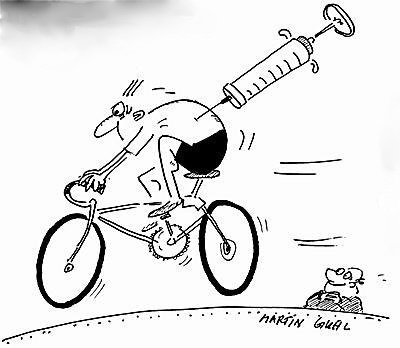