Sleep deprivation. 4 hours sleep. Going down to the hotel lobby to find the breakfast completely jammed with people in cycling clothes with numbers pinned. Boy, glamorous sport this bike racing is. These tourists take their tours seriously down here. It was strange riding the 6 miles over to the start in pitch black. It was even stranger arriving there, or at least getting close, 1 mile, to there and the streets were completely clogged with cyclist. 6am. 15 thousand riders. It is nuts.

Not much to say about the race. 100 mile loop. Virtually flat. Hardly any wind until towards the end, but that wasn’t a issue. There were a couple big pile ups. I think everyone has been watching too much Tour de France TV and wants to emulate the Pros in all respects. I can’t explain it otherwise. Wide open roads with nothing going on and then there 20 guys laying on the ground.

5 guys got away with 25 miles to go and the field pretty much stopped. We’d been rolling along in the upper 20’s to 30 most of the day and then it was 22mph. They disappeared pretty quickly. There were two Hotel San Jose riders, a Metro/Texas Tough guy and a couple others.

The field did nothing but started ramping it up a few miles out for the field sprint. The finish is kind of unique. You are on a big divided highway and there is a 200 meter “climb”. At the top you peel off on a exit ramp and go down into downtown Wichita Falls. There is a sharp left, the two blocks to a 90 degree right, and then 700 meters to the finish. Tailwind. Going up the climb, right before the exit ramp, there was a police car park. The field split around the car and the left side crashed. Nick fell here. I was on the right and moved up to the top ten heading down with 1 km to go. I go up to Josh Carter’s wheel right after the left corner, the for some reason the field wanted to turn on the first street and not the 2nd. A couple guys turned right in front of me as I watched the lead motorcycle go around the next corner. I sprinted back up to the front as we turned the final corner. Benn Stover, our new team member, took off before this corner and had a good gap on us. I was about 8 guys back in my 11 already, when from the first side street on the right, Brian Fawley (I think it was Brian, but if it wasn’t it was one of his Park Place team mates) comes flying through the barriers at me at a 90 degree angle. It was bullshit. He had turned off the course a blocked early and then sprinted back into the race the next block down. Anyway, I swerved to the left to avoid a collision, but by then the guys in front of me had jumped and I was in the wind the whole way to the finish. I didn’t pass anyone, but no one came by me either. Josh Carter and maybe a couple other caught Benn right at the line. He finished around 8th. I was 13th on the day. Russ Walker from Metro/Texas Tough won solo. Pretty great effort. Nice race to win.

It is pretty nice having 115 miles, with a 100 race miles on your legs and it’s only 10:30 am. The race was pretty good for fitness. Nothing too strenuous. Pretty crazy hard off the front, but that is just normal bike racing. I felt a ton better at the end of the race than at the start. The after race “climbing stairs” test is good. Not too bad. Hopefully I’ll feel just that much better tomorrow. It is amazing how much form you can gain from just a few races. 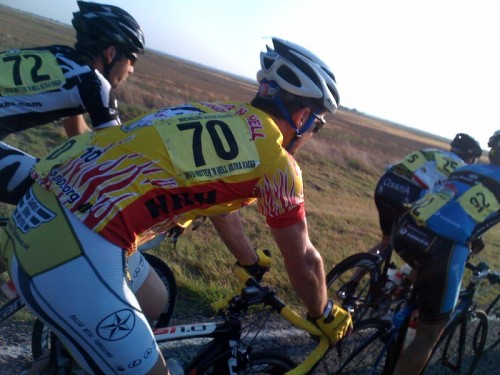 Trudi couldn't get to the start, so I had my iPhone in my pocket and took some photos while racing. Here's a shot of Jason Waddell sporting his HHH Leader's Jersey. 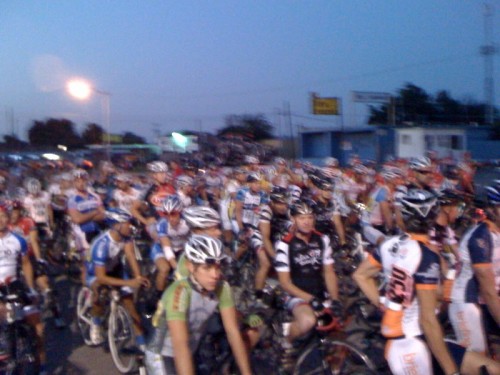 At 6:45am, most of the riders probably felt as blurry as this photo. 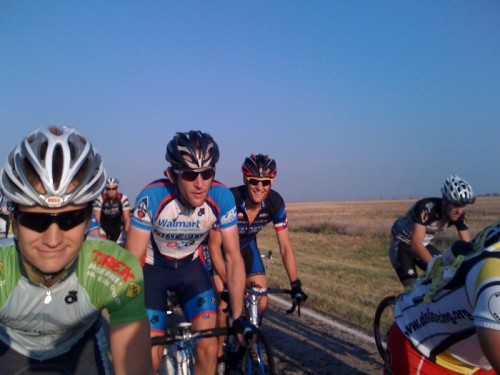 Photo over my shoulder during the race. Evidently it was mildly amusing. Nick in the foreground. 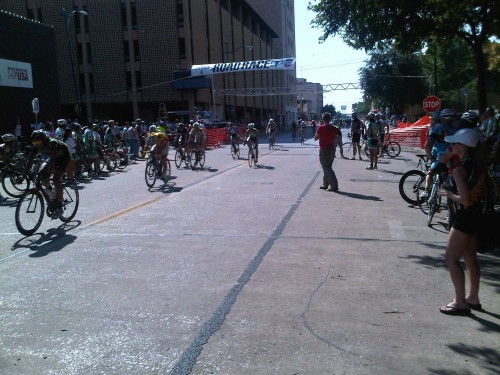 Josh Carter after the line in the field sprint. Ben and I are in the background.