There was a ton of money to be won yesterday. And we won our share. It wasn’t a normal bicycle race. That made it all the more interesting to me.

This race is one lap around Lake Winnebago, North of Milwaukee. The distance is a bit under 90 miles. The was a $10000 prize list plus an extra $20000 to break the course record of 26.1 mph. That wasn’t going to be an issue. The weather was perfect. In the 60’s at the start which was at a very unreasonable 5:50am.

Brian had flown up to Milwaukee at noon on Saturday. We raced Saturday and then got up at 3:50am. Not much sleep. I don’t really need too much sleep if I’m only doing one race afterwards. But, if it’s a stage race, it doesn’t work out too well. Anyway, after eating our frozen waffles, we sleepily rode over to the start at 5:00 am.

There were a lot of riders. I don’t know how many actually. Not 3000, but way more than a 1000. The first wave only had 150 guys and that was the race. It was a strange mix of Pros, 1-2’s, 3’s, women, children. Everybody. The race started out pretty quickly. No one was going to let the bonus money not be in play.

Eventually, one Aeorcat rider, Adam Bergman, Texas Roadhouse and James Stemper, Kenda were pretty much the only guys left doing a 3 up rotation. And we were not going slow. Most the time near 28 mph or so. I went up to the front after an hour and decided to take a pull. I was going to pull, timewise, the same time as they were. Stemper stayed on the front nearly 4 minutes at around 28mph. Then Adam pulled 2:30, so when I pulled through that was my target. I did my 2:30 minutes, but not without a bunch of effort. Adam told me after the race he thought where I was pulling was slow pavement. I didn’t know what that meant, but am going with it anyway.

There was only one climb the whole loop. At 45 miles. They took the speed up to over 30 for the couple miles before the hill. It wasn’t a mile long. The steep pinch was barely 400 meteres. Brian followed a couple guys that attacked, jumped them and rode over the KOM alone. Good $$$. I was surprised how destroyed the field was at the top. I was in the next small group of right behind Brian, but it came back together. There were probably 30 or so guys left, but another group of 40 caught back on a couple miles later.

Soon after that I got in a move with two Kenda guys and Pat Lemeiux. By then it was going back South towards Fond Du Lac and was gently rolling downhill. We were pulling 32 or so and never got more than 30 seconds on the hoards.

Eventually we were caught and the race kept splitting up at the front. Brian or I made each split. Sometimes both of us, but nothing seemed to be staying away.

It amazed me how fast these guys that didn’t seem like they could pedal, could go downhill. It was pretty entertaining watching the efforts made by individuals and teams to try to stay in contention. It was very unorthodox from a professional bike racer’s perspective. Impossible to read, which made it difficult to anticipate. There were so many different races going on within the race. Male riders trying to help out female riders. People just hanging on to try to win their age group. And deals being made, constantly, everytime something went up the road, because of the bonus money.

Finally, within 10 miles to go, 5 guys got away. Two Kenda guys, Rob White and Chad Hartely, Pat Lemeiux and Andrew Crater, plus one more guy I don’t know. Brian and I both missed the move, but that is what happens when there are only 2 of us at the race. If it would of been a more difficult course, that never would have happened, but when there are dozens of attacks going continuously, then it is nearly impossible to cover everything.

The front end all split up the last couple miles and Crater dropped Rob, who finished 2nd, Pat third and Chad 4th. The field came in just a couple seconds behind Chad. I never really got to sprint. I was in the right position, but I never anticipated the movement of the sprint and was pretty much boxed in all the way to the line. I finished 16th overall. The record was smashed by nearly 2 mph. Next year it will take a concerted effort to eclipse that.

I have to point out that my friend Laura Van Glider, who was riding for AeroCat, stayed in the front group of men until the end. She stayed in the front split over the hard climb and never seemed to be out of position. She handily won the women’s race and the KOM $$$ for women. She made a big chunk of change for her exceptional effort.

Anyway, it was so weird having nearly a 100 miles on your legs and it was just 9 am. Brian and I rode back to the hotel and showered, packed up and came back for the awards ceremony. It was pretty great. A spaghetti lunch. All the chocolate milk and beer you could drink. These “tour” races have a much better awards banquet than “real” bike races. We could learn something from them.

I went out for another ride last night, so ended up with around 130 miles for the day. That’s the most I’ve ridden this year in one day. That doesn’t seem right for some reason.

I’m driving back to Kansas today the the ride at Spin Pizza in Overland Park at 6:15 tonight. Then three days off and down to Wichita Falls, Texas for the Hotter than Hell weekend. I’ve been watching the weather down there and it is ugly to say the least. It was 104 when I checked at 9pm last night. Not good for my cool weather acclimation. But, I am way short of races, so have to catch up somewhere. 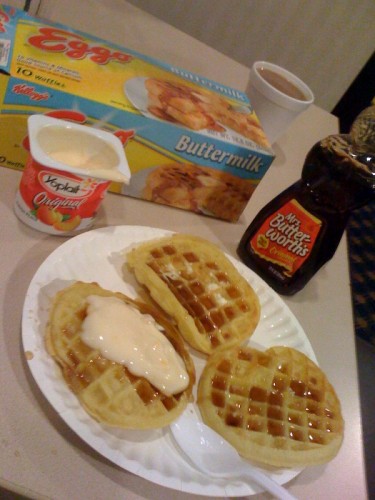 The only breakfast around at 4am. 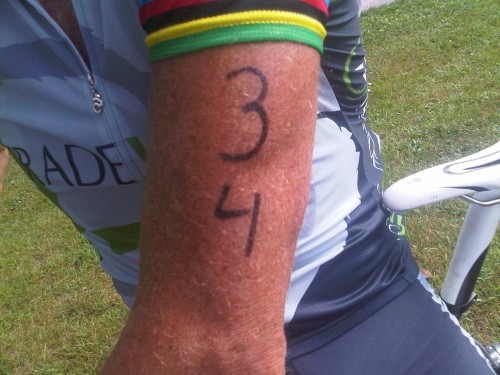 I try to stay out of events that feel the need to mark your number on your body before the start. 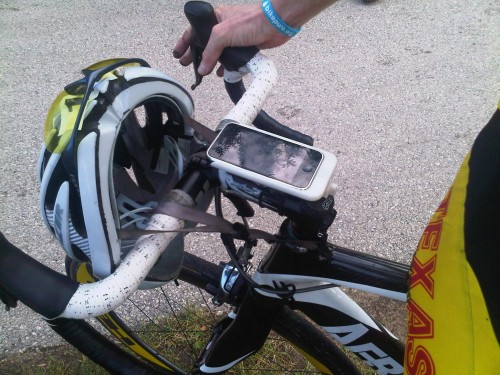 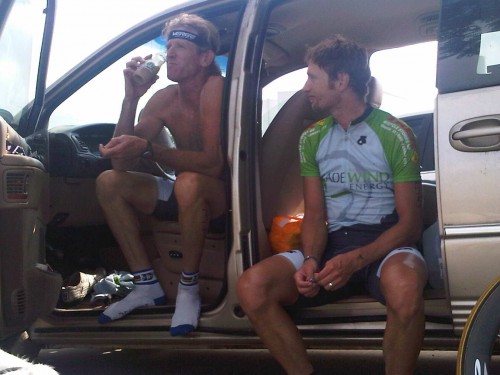 Brian and I after the race. 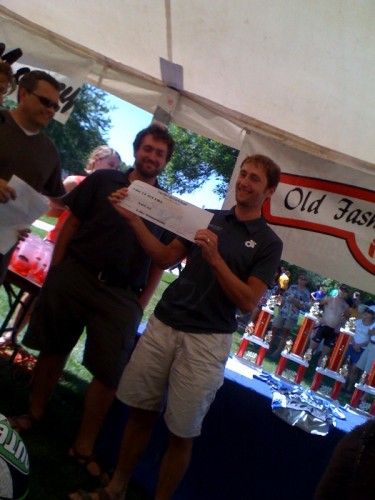 Brian receiving his KOM check at the awards ceremony. 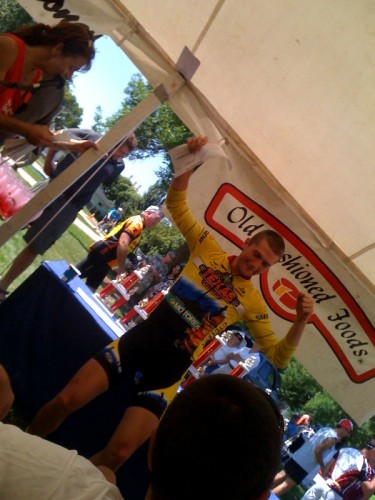 Pat Lemeuux doing his little Pat Dance with the big check for 3rd. 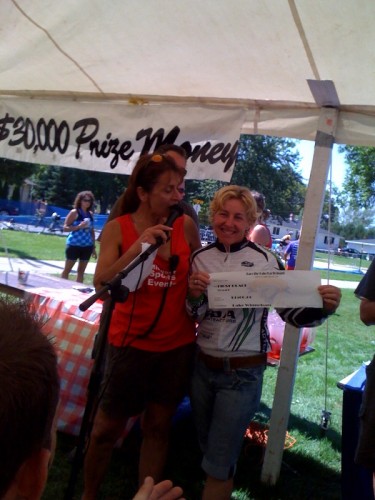 Laura, all cute and bubbly, receiving her first place prize $$$. She is not much of a draft BTW.