I’ve never raced the Tour. But, I’ve race a ton of long stage races. I’m not sure if the riders are cognoscente of the live media coverage or what. But, explain what was going on today? I mean between Schleck and Contador?

All these people are raving about these “psychological battles”, “mind games” and the mental pressure of the stage. Stupidity. That is the only thing I can come up with here. Obviously, Andy Schleck wanted to ride behind Contador on all the climbs. Especially the final climb. He was worried that if he got ahead of Contador, Contador would jump him and he wouldn’t be able to match the acceleration and loose more time. So when Contador decides to call him on it, they both coast off the back of the “field”. I understand it up to that point.

What I don’t understand is why they never finished it. They never jumped. If you take someone off the back in bike racing, or get taken off the back, and except that is what is happening, then you recognize that you’ve been challenged or are challenging the rider you are with. In that case, it is settled by one rider trying to bridge back up the the group without the other. One of them needed to jump. But, no. We don’t get to see what should of happened. By should, I mean, that both riders knew what was up here.

I guess Andy Schleck blinked and told Alberto that he would pull back up. What was that? They just gave 3rd and 4th on CG time and didn’t do anything but ride stupidly. The time was kind of meaningless. Some call it a truce. If it is a truce, then they should of called the truce before they were 20 seconds behind and just ridden to the finish with Menchov and Sanchez. I don’t get it. It must be something for TV. Schleck needs time. If he wasn’t planning on getting any today then he should of stayed with the lead group and kept his guard up for an attack by Contador. Their posturing didn’t do anything for me. To me it was like watching a okay movie that had an abrupt finish that pronounces a sequel. Maybe I missed something. 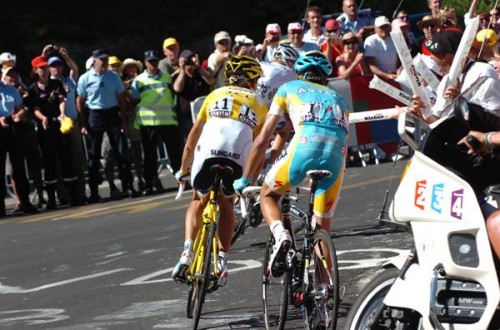 Andy Schleck pulling Alberto Contador back to the lead group after they played their reverse tactic card.